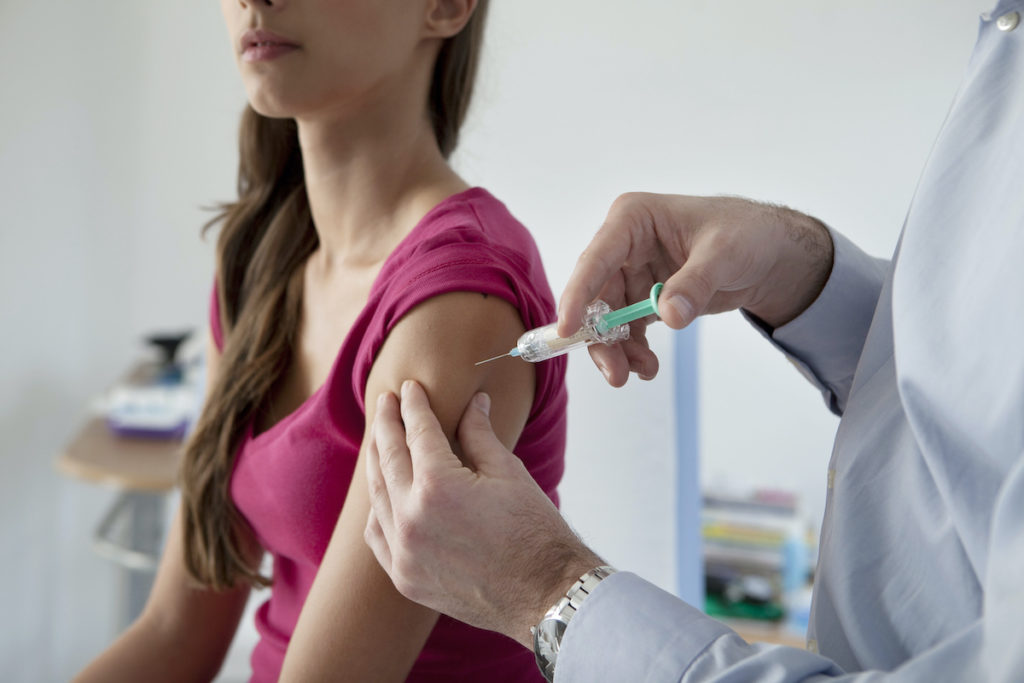 At first, Holly Bowers tried to schedule a vaccination appointment for her and her mother on her own — using just her wits and an internet connection.

But, she didn’t have any luck until she learned from others how to navigate the complicated vaccination distribution system.

Part of the problem is the scattered system for where vaccines are being doled out: Should you schedule your dose through Walgreens? The health department? The hospital system? Should you drive out of town? As of Monday, individuals in the 1C group, which includes essential workers, those with certain health conditions and people over the age of 60, can get vaccinated at Louisville pharmacies, hospitals and the city’s LouVax site.

But, appointments fill up fast.

“It was very tricky,” Bowers said. “And you had to be on top of it, like trying to get concert tickets.”

Karl Bullock, a Louisville Metro Department of Public Health and Wellness public information officer said that a central sign up portal for Louisville’s vaccination appointments would be “nice,” but roadblocks were set in the past: The city didn’t have the public health infrastructure necessary to handle something as big as the COVID-19 pandemic when it hit.

“It emphasizes the importance of public health spending even when we aren’t in a crisis or pandemic such as what we have dealt within the past year,” he said.

If you want to schedule an appointment now, and not wait for massive public health funding, here are some stories of how Louisvillians, including Bowers, scheduled — and got — their vaccines in Louisville. And how you might be able to, as well.

Disclaimer: All of these methods require some sort of privilege, either access to the internet, the luxury of time or reliable transportation. Black Lives Matter Louisville and the Louisville Urban League are both offering rides to appointments, and local hospitals are vaccinating underserved communities through pop-up sites at neighborhood churches.

Bowers, who is 42, was determined to get a vaccination appointment first, for her mother, who is over 65 with qualifying health conditions. Then, if she could, another shot for herself. Bowers works for Humana, and insurance falls under finance in the 1C essential worker category, she said.

Bowers created accounts for her mother at Walgreens, Walmart, Meijer and Kroger and bookmarked all of the pages.

“I had tried over and over, to the point where I was familiar with all the forms so I could navigate through it quickly, and I just was not getting appointments,” said Bowers.

Walgreens had appointments open, but only for the first dose. Since there were no second doses available, Bowers couldn’t schedule one.

Bowers tried UofL Health’s and Norton Healthcare’s websites, too, but she could only place her mom on a waitlist. UofL Health’s appointments disappeared quickly, and no one ever contacted Bowers’ mother, so her mother called Norton. They eventually called her back and scheduled her appointment.

Bowers also joined the vaccine hunter Facebook group. She learned about VaxxMaxx, a website that’ll show you which Walgreens pharmacies have added appointments recently. It gives you the zip code to use when searching for appointments on the Walgreens website.

Through VaxxMaxx, Bowers found an appointment for herself in Horse Cave, Kentucky, over an hour away. But later that day, around 3 p.m., Bowers saw that there were appointments available at a Louisville Walgreens. She hopped on and was able to schedule an appointment for both her and her mom, sooner and closer than their previous appointments.

She canceled the Horse Cave and Norton appointments. On March 5, Bowers was vaccinated. On the 6th, her mom was.

Bowers’ advice to others is trying to familiarize yourself with websites’ screening questions, so you can answer them quickly.

Daniel Hargrove, 43, wasn’t eligible for most vaccination appointments in Louisville last week, even though he’s in the 1C category for health reasons. But, he was able to secure a dose early that would have otherwise gone to waste.

Hargrove got a phone number for UofL Health (502-588-7004) and called six to eight times a day for two days. When someone finally answered the phone on the third day, he asked if he could be put on their list for leftover doses. Vaccines that aren’t used by the end of the day — whether because of canceled appointments or some other reason — might be thrown away.

Hargrove told the UofL employee that he was in the 1C category. They asked for basic information like his age and race, and that was that. One week later, the hospital called Hargrove as he was leaving his job at 4:30 p.m. Hargrove was asked whether he could get to the downtown UofL site by 5 p.m.. It was just a few blocks away from the Humana building Hargrove works in.

Hargrove encourages other people who are not yet eligible to at least try to get on a leftover vaccine list. Pharmacies have them, too.

“There’s always going to be cancellations for some reason,” he said. “That’s always going to happen. And then there’s not enough time for somebody to schedule, there’s nobody online looking for that appointment right then, but if you’re on a list or if you’ve got it, it’s going to go to waste if somebody doesn’t use it, you know?”

The Louisville health department’s line is, “the most important thing is getting the community vaccinated.”

Dani DeVincentis’ vaccination experience took about three hours of her Saturday and some miles on the road, but she got the shot quicker than if she had only looked in Louisville.

DeVincentis, who is 32 and in 1C for medical reasons, drove to Lexington to get her shot with hundreds of others at UK’s mass vaccination site. Kentuckians in 1C are able to get vaccinated at almost any site in the state. (This LEO reporter also got her 1C vaccine in Lexington but through the state’s regional vaccination center ran by Kroger at the Kentucky Horse Park).

At first, DeVincentis, who works for Wiley Education Center, was more concerned with getting her mother and grandparents vaccinated, because they are also medically vulnerable. But, her friends kept telling her about how she could get the shot, too.

DeVincentis found two sites where she could sign up for a waiting list: Owensboro Health and UK Healthcare. On March 5, DiVincentis requested an appointment for both. Four days later, Owensboro Health got back to her, and she picked a slot over a week out in Leitchfield. The next day, though, she got a notification that she could sign up for a UK appointment, which was closer and sooner.

Meanwhile, DeVincentis’ mother was able to schedule her vaccination appointment when she drove DiVincentis’ grandmother to her appointment with UofL. They put her on a waitlist when she asked and called her the next day.

On March 13, DeVincentis drove to Lexington and waited in a long, outdoor line. The entire process, including waiting under observation in the event of any side effects, took around 45 minutes.

DeVincentis said she knows she was privileged to be able to get vaccinated so far out of town.

“I have a car; it wasn’t a big deal. I was able to take time off work. But, all of those things would be barriers to somebody that has to work weekends or doesn’t have their own transportation or that short of thing,” she said.

At the same time, she encourages others to do everything they can to schedule an appointment.

“Try everything,” she said. “If you have the ability to travel, I wouldn’t let that hold you back. Like, if you can, do it.”

The Rev. Ryan Eller, 38, didn’t just get his vaccination at the LouVax Center in Louisville, he helped others get theirs, too.

Volunteers at the LouVax Center are eligible for doses after they’ve worked for 40 hours.

But, to Eller, the promise of vaccination was just a perk of an experience he called hopeful and humbling. And, it was not one without risk.

“Volunteering as a way to get the vaccine, folks should not take it lightly,” said the founder of the nonprofit New Moral Majority, a religious-based political action group. “Because particularly in those early days, I mean, it was — I think we all knew we were risking our lives by volunteering.”

To volunteer, you can sign up here. Eller said it was difficult, at times, to find available volunteer slots. At the site, he mostly screened people as they drove in, asking them health and safety questions, or he would help them with their paperwork and take temperatures.

After around 40 to 50 hours of volunteering, Eller got an email saying he was eligible to sign up for a vaccination. About three and a half weeks after he started volunteering, Eller was driving into Broadbent Arena for a volunteer to check him into his appointment instead of the other way around.

Eller was grateful for the vaccine, but also for the experience of volunteering.

“I’m a faith leader, and I tend to think that for most of us, if we have an opportunity during our lives to be a part of something bigger than ourselves, to save even a single life, then we will have lived a life of meaning,” he said.

As someone over the age of 60, Alice Baldwin became eligible to receive the COVID vaccine at most Louisville sites on March 1.

She tried to schedule an appointment via a UofL Health link she found online, but the website said that the hospital’s appointments were booked until at least the end of April, said Baldwin, who is the props master for the Kentucky Opera.

Two days later, her husband found another link on Nextdoor. She tried it at 8 p.m. and found an appointment for the following day.

Baldwin had an easy time scheduling her appointment, but she’s had friends who had to drive to Lexington or Somerset.

“I think my takeaway from all of this has been, it really is random,” she said. “It’s not a terribly well put together system. But if you can get it, it runs real smoothly once you get that appointment.”