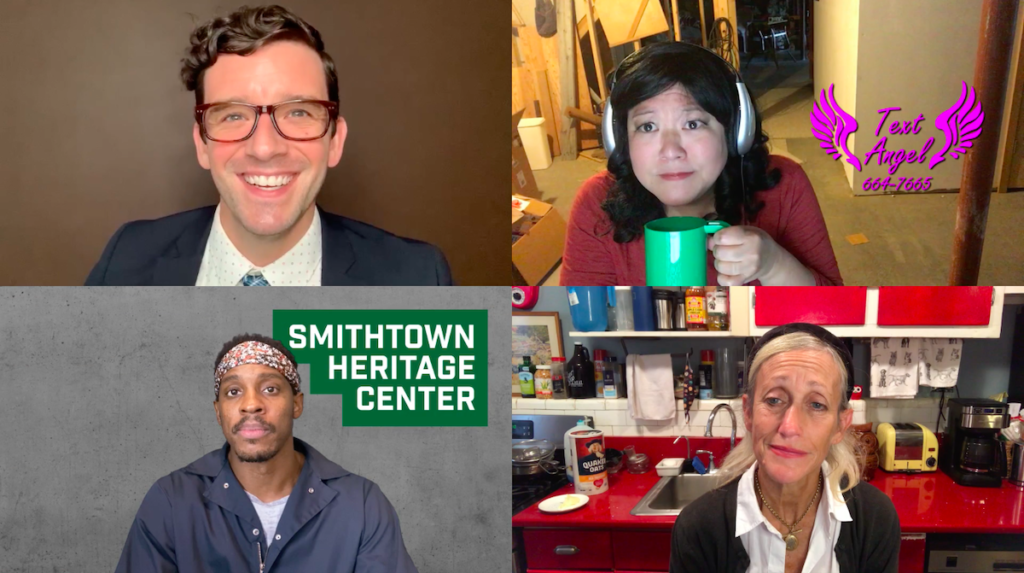 For two-and-a-half millennia theatrical storytelling has been rooted in conflict and connectedness. From Sophocles to Lin-Manuel Miranda, a playwright’s main tactic has been to put people on a stage, give them something to contest, and see what happens.

We still live in a world filled with conflict, of course. But we also live in a moment when the central paradox of our time is that physically most of us are profoundly isolated but — apart from the occasional frozen Zoom screen — more immediately connected to others in the world than ever before, at least if we’re part of the privileged, affluent, technically advanced, networked world.

Over the past year, theater companies have used technology to make connections in myriad ways.

The astonishing thing about Drew Larimore’s play “Smithtown,” which is streaming in a production by The Studios of Key West (where Larimore serves as artist-in-residence), is that it is fundamentally a drama of profound disconnection. You might think of “Smithtown” as a kind of techno-twist on “Rashomon,” where a story is revealed in multiple accounts — except that the characters and accounts revealed in “Smithtown” will never confront one another or be adjudicated.

Larimore is a Louisville native who started writing plays pretty much as soon as he learned to hold a pencil and has never stopped. In 1999, when he was a sophomore at the Youth Performing Arts School, his play “Third Shift” was selected for production in a festival of short plays in New York City. In the years since, his plays and musicals have been staged in theaters everywhere from Off-Broadway to Australia.

“Smithtown,” Larimore said in a phone interview, was intended for the stage — and he hopes someday to see it play on stage. But as directed by Stephen Kitsakos, it turns out to be a perfect vehicle for streaming delivery.

I watched the stream. It’s a story told through a sequence of four relatively close-in monologues delivered by a quartet of remarkable actors whose vocal and facial tool sets transcend the physical stasis of the action.

The first monologue features actor Michael Urie (a busy TV, film and theater actor and director with a long list of credits and awards, including a stint on the TV show, “Ugly Betty”). Here, Urie plays Ian A. Bernstein, a bespectacled graduate student who is teaching the first day of a Smithtown College class dealing with the “ethics of technology.” This first lecture is an exercise in stilted academic pomp that soon goes off the rails. He plans to teach ethics based on “instances.” And when he sets out to explain what he means by an “instance,” he tells his class about a night months earlier when his longtime girlfriend jilted him by text, and he set out to get revenge by enticing another girl, Melissa, whom he describes as a well-known “doormat,” to send him some indiscreet selfies. Ian forwards those to his girlfriend as an act of vengeful power, but what follows is a predictable viral onslaught that inevitably leads to tragedy — a tragedy that, in Urie’s remarkably fraught performance, Ian has somehow managed to isolate as an “instance” to dissect rather than a cruel act for which he must account.

The second monologue brings us Bonnie, a tensely upbeat “text angel” whose business is sending people upbeat motivational texts by subscription. Played by Ann Harada (whose extensive theatre credits include Broadway roles in “Avenue Q,” “9 to 5,”  “Les Misérables” and more). Bonnie has a feverish caffeinated energy that borders on panic — and in this deftly written monologue, keeps us guessing about her connection to the first piece.

The third monologue, too, is a deft act of misdirection — with a finely-honed comic edge from actor Colby Lewis, whose acting credits include “One Tree Hill” and “Chicago Med.” Here he’s Eugene, a photographer, videographer, social media manager and apparent curator of a wildly implausible collection of “heritage” artifacts who is looking forward to the dedication of the Heritage Center’s new water fountain. And, he’s driven by a fierce desire to prove his worth as an artist — which, to him, means a cool-eyed, uninvolved observer of reality, no matter how cruel. This monologue, which veers from droll ironies to gut-wrenching horror, could well become an audition piece for a generation of performers. It’s a superb piece of writing, and a great performance — and I feel duty-bound to observe that it probably deserves a trigger warning for its depiction of the play’s defining event.

The final monologue likewise is a fine piece of writing, performed with devastating emotional impact — especially if you’re watching this up close on a handheld portable device. Constance Shulman, another performer with an arms-length list of credits (including  “Orange is the New Black”)  plays a woman who is welcoming strangers with sweets and inane chatter that gradually unwinds to reveal her own tragic reality.

“Smithtown” is an unsettling and extreme collection of provocations — and if you are looking for naturalism and a hefty dose of plausibility, it may not pass your test. But that’s true of much theater. The intriguing thing here — apart from the nakedly exposed performances given by experienced performers working in close proximity to a camera — is Larimore’s lateral approach to this dark narrative.

“Smithtown” streams through March 13. For information and tickets, connect to The Studios of Key West: tskw.org/smithtown-2/