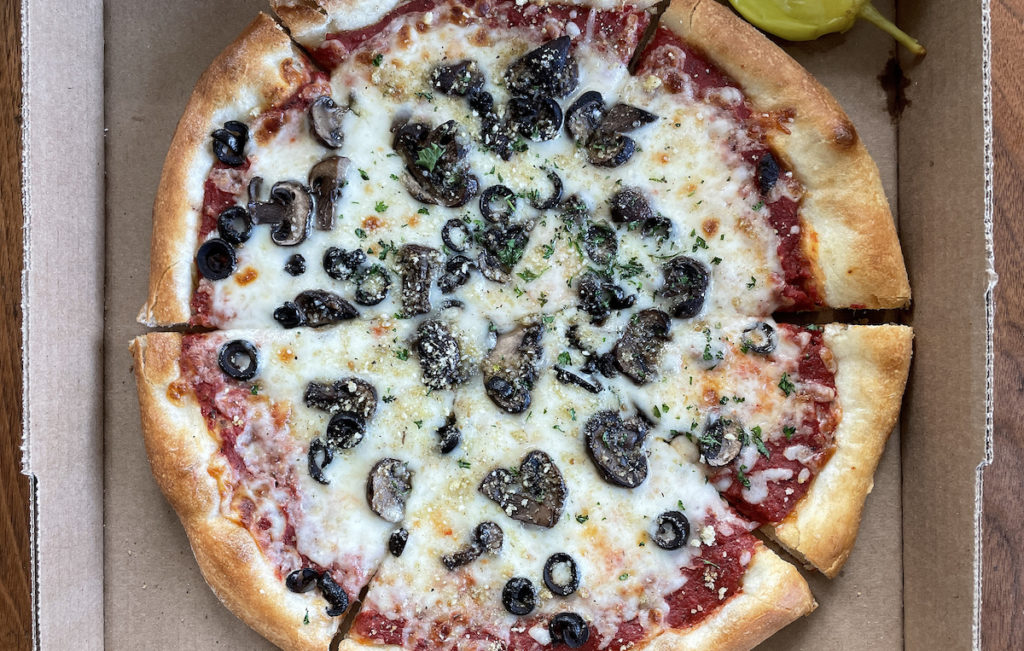 When one door closes, another opens, the sages say. And this simple wisdom appears to be true, at least insofar as the city’s pizza scene goes.

It was sad news for local pizza lovers when Butchertown Pizza, one of the city’s best, closed its doors in September 2019. Then more bad dining news struck when Couvillion restaurant shut its doors last November.

But then those fabled doors started opening. The space that had housed Butchertown Pizza, nicely renovated, became home to Hog Father Pizza Shop last month. Better still, WLKY reported on its opening day, Couvillion’s head chef Crosby Reasor came on as Hog Father’s top chef, and brought much of the Couvillion crew along.

The restaurant’s name and its logo, a grinning hog with dapper hat and cane, puzzled me at first. Wouldn’t a personified pig be more suited to a barbecue joint than a pizzeria? Then I got it: Butchertown! What’s more, JBS Swift, the giant bacon makin’ plant, lies right across Story Avenue from the pizza shop.

As it turned out, I can see that Couvillion touch in creative and well-made side dishes and a salad that were all really top-notch. I wasn’t as whelmed by the main dishes we chose. A pizza and a smash burger were decent but uninspiring. Still, taken as a whole, I give it at least one and a half thumbs up, and would definitely go back for more.

The menu goes a bit beyond standard pizzeria fare, with random Butchertown-appropriate goodies such as pork rinds ($7), crispy Brussels sprouts with pork belly ($9) and a pork chop parm sandwich ($15). About 10 apps and salads range in price from $6 (for two of the salads or a snack bowl of bacon candy, kettle corn and candied peanuts) to $18 (for a dozen barbecue-spiced roasted or fried wings).

Five sandwiches range in price from $12 (for hot ham and cheese) to $15 (for the pork chop parm). The extensive pizza menu includes seven specialty pies with 10-inch or 14-inch hand-tossed crusts or a 10-inch cauliflower crust; they are priced from $14 to $19 depending on size and toppings. Build-your-own pies start at $10 for the 10-inch crust or $12 for the 14-incher, with a $3 upcharge for cauliflower crust. More than three dozen toppings add $1 to $4 each.

Hog Father’s fried giardiniera ($9) was outstanding. A mix of cauliflower florets and bits of of sweet onion and red bell pepper had been lightly pickled, quick fried with a tempura-crisp coating and liberally sprinkled with chopped green onion. The pop of pickle brine inside the crisp crust created a tasty mingling of flavors.

An arugula salad ($7 for a half size, $13 for a whole salad) was a winner, too, thoughtfully imagined and carefully prepared. The half salad was enormous; a full order would surely serve a party of four. Young, fresh arugula leaves were expertly prepped, dry and crisp, not limp. The greens were topped with crumbles of mild goat cheese and a few candied peanuts, very thin slices of granny smith apple and more sprinkles of goat cheese. A garlicky and light buttermilk ranch dressing was served on the side at our request.

A portion of crispy Brussels sprouts served as a $2-extra side to the burger spoke clearly of a chef who’s interested in combining textures and flavors and knows how to do it. Sprouts were halved lengthwise, grilled until charred and mixed with plenty of pumpkin seeds, thinly sliced radishes and tiny bits of crispy noodles. A distinct bite of heat lurked in the dressing.

I’ve never gotten the point of smash burgers. I like my burgers fat, juicy, and rare. Hog Father’s smash burger ($13) had potential, though, save for what had to be a kitchen accident: There was way too much salt on that meat, the kind of over-salting that has you gulping water all afternoon. Aside from that, it was a good burger, thin and very crisp, which is the point of a smash burger. It was served on a browned, buttery potato bun, topped with a melted slice of yellow cheese, a big glob of yellow mustard and several crisp, sweet pickle slices. It came with a pleasant “shop special sauce” that reminded me of remoulade.

I chose a build-your-own 10-inch pizza ($10, plus $2 for toppings) and decided to add umami to a meatless pie with a mix of smoked crimini mushrooms and black olives. I judged it a good pizza but not a great pizza. A thin, white, rather bland crust was a bit undercooked; firing the leftovers in our toaster oven for 10 minutes at 350º improved it. It was generously spread with a thick red sauce flavored with a little too much Italian herb mix for my liking, and a heavy blanket of melted mozzarella and Parmesan. The toppings were relatively scant but tasty; the smoked brown mushrooms were a particularly nice touch.

Our meal for two wasn’t cheap at $45.58 plus a 20 percent tip, but it was generous, providing enough food for a couple of days.