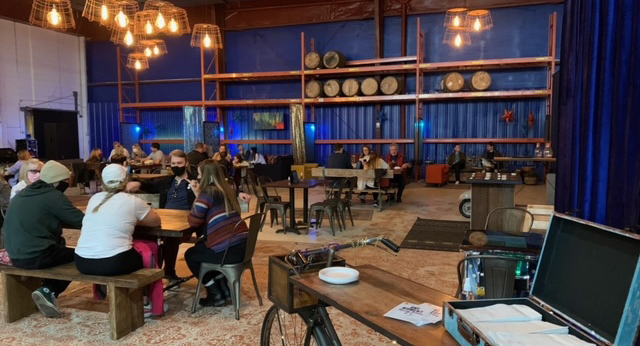 The pandemic may have lightened our pocket books, made us want to disown our children and generally crushed our souls but, on the plus side, it also made us drink a lot of good beer! So much so that the local beer scene has been able to continue to grow and expand. Since our last article, TEN20, West Sixth Nulu, and Butchertown Brewing have all opened their doors, and Monnik has added a second location in New Albany.

What else is on the horizon? Here are a few things we’re excited about:

Imagine it’s a beautiful spring day, perhaps in the first week of May. You’re sipping an Oaks Lily-inspired crisp cranberry and orange beer topped with a spritz of wood-aged blackberry sour beer, while staring at the sparkling Louisville skyline and listening to the gentle waves of the Ohio. Now, look to your left and wave at the cool couple at the table next to you, because… trust us, we’ll be there! The space that used to be Buckhead Mountain Grill in Jeffersonville will soon have solid food, wine, liquor and an upgraded patio with a free-flowing environment between the inside and out.  “We’re doubling down on what is the clear showpiece of that space—the view,” says Upland president David Bower.

Oh, and they’ll have beer. Flowing from the 24 taps in Jeffersonville will be a mix of Upland’s flagship products as well as sours and small batch experimental stuff coming from their three Indiana-based breweries. We are excited to try taproom-exclusive small-batch stuff, like the Lily-inspired beer described above, or the recent Teddy Bear Kisses Russian Imperial Stout variant with hefeweizen yeast, which adds banana and clove notes. “Whatever keeps the brewers [and us beer snobs!] entertained,” says Bower.

Upland also enjoys collaborating with other breweries and hopes that once they are “officially locals,” there will be opportunities to partner with our other fine beer creators. Personally, I just hope other collabs are as fun as the Overcompensation Double IPA battle Upland does with Against the Grain. Google it to find excellent two-way trash talk like, “sure, the guys and gals at Against the Grain have better tattoos than us and the uncanny ability to shotgun beers with more C-list celebrities, but…”

Since they began distributing here two years ago, Louisvillians have been enthusiastic consumers of Asheville, North Carolina-based Hi-Wire beer. This is one of the reasons Hi-Wire chose Louisville for its sixth taproom — they already know we like them. Previous patrons of Phoenix Hill Tavern will be able to retrace their drunken steps and grab a beer once more. This time, however, they can expect an open, bright, whimsical space with plenty of light-hearted, family-friendly, fun vibes. The taproom will have 21 taps pouring Hi-Wire beer, plus one local cider and three wine taps. They will not have liquor, and food will be available through other tenants of the mixed-use complex, including Carali’s Rotisserie Chicken.

Hi-Wire brews a little bit of everything from lagers (which co-owner Chris Frosaker is especially proud of) to hoppy beers, sours, dark beers, etc. The location will have a small pilot system where Hi-Wire brewers can tinker when they come visit. Hi-Wire is also excited about collaborating with other local breweries as they have in the past with Against the Grain.

Hi-Wire is all about FUN, and the taproom will offer plenty of ways to entertain yourself while you savor the flavors. In addition to ping-pong,-foosball and shuffleboards, the taproom will also have a 20-by-30 foot soccer pool field (Frosaker describes it as playing billiards with soccer balls). But what could be a somewhat unique differentiator for Hi-Wire is how they embody family-friendly fun. In our personal (and rather extensive) experience in taprooms across the country, we’ve found that many beer establishments say “family friendly,” but really mean “mildly kid tolerant.” North Carolina breweries, however (more so than anywhere else we’ve spent time) have actually found ways to create environments enjoyed by grownups and kids like. “Everyone deserves to have fun,” says Frosaker, “and that includes parents.” Thank you, Chris! We feel so seen.

Wait, what? That brewery opened like two years ago. While that is technically true, a combination of circumstances limited brews coming out of the Logan Street Market-based brewery to a few collaboration beers. However, the 15-barrel, three-tank system is now fully operational and ready to churn out beers created by new brewer, Blake Cotton. A native Louisvillian and Eastern High School (and UofL) grad, Cotton cut his brewing teeth at Fullsteam Brewery in Durham, North Carolina. Fullsteam specializes in “Farm, Foraged, and Value Added” ingredients, and we can expect Cotton to bring this experience to Wild Hops, working with locally-sourced ingredients. For example, Cotton once led a group on a foraging expedition at a nature preserve where they picked invasive species and then incorporated those ingredients (think elderflower, black walnuts, etc.) into beers. Go check out Cotton’s inaugural brew — a Kentucky common — and enjoy it in the recently-completed, large, lounge-like space next to the bar within the Market.

Lastly, I want to thank Upland’s president David Bower for validating our almost spiritual reverence for beer. As a philosophy major, Bower explains that, “Philosophy is about finding ways to solve for the mysteries of life and finding connections between people and concepts. And beer helps do that too.” Yes it does, David. Yes it does.