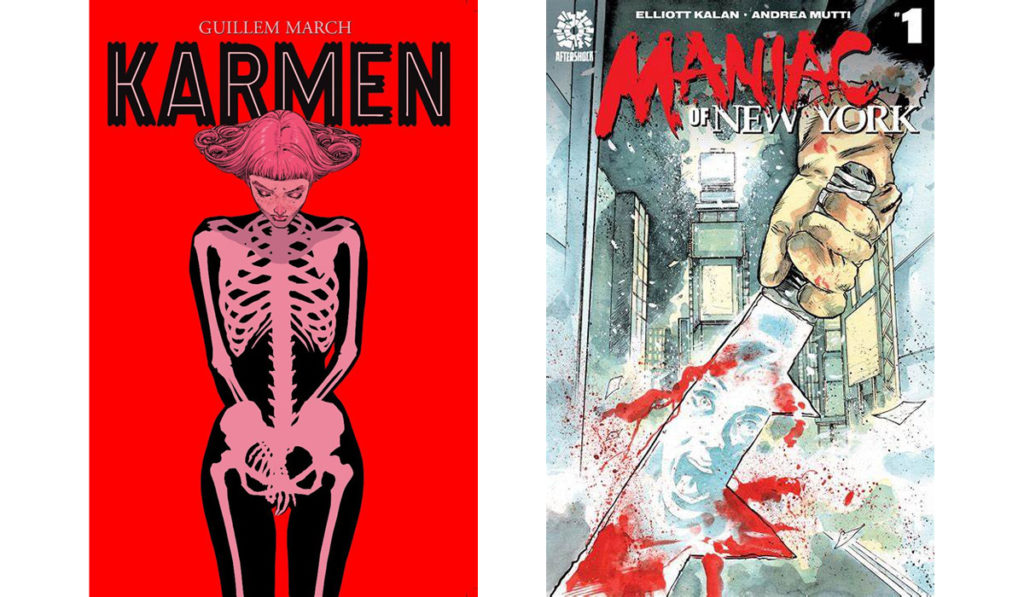 Karmen No. 1
Story and Art by Guillem March
Review by Krystal Moore, The Great Escape

Guillem March is a Spanish artist and writer best known for his work on DC Comics’ Batman, Catwoman and Harley Quinn, but don’t shy away from this book thinking it’s in the superhero genre because of that. The art and story are very different in this Image book than the typical good guy/bad guy stuff. That said, if you’re a fan of Sandman, you’ll be right at home!

There’s almost nothing I can say about the characters that wouldn’t be giving too much away. There is a love story at the center, and that is the reason for all the things that are happening, but it’s most definitely not a simple story of two people falling in and out of love. There is a supernatural spin here, but I wouldn’t call the story supernatural, at least not yet. I know that doesn’t make sense, but maybe it will once you read it. The art is gorgeous, giving even more meaning to the words. This is a pretty perfect book. Please, do yourself a favor and pick up Karmen No. 1. Hopefully, each book in this five part series will be as amazing as this first chapter.

Maniac of New York No. 1
Written by Elliott Kalan
Art by Andrea Mutti
Review by Atticus Moore, The Great Escape

I initially picked up “Maniac of New York” excited to see a new take on the slasher genre mixed with social commentary about systemic issues in America and how they’re ignored by those in power. The concept is interesting: A masked killer has been terrorizing New York for so long that the city accepts this as just an unfortunate aspect of life. The art style is unique and works perfectly for this kind of story. This is clearly a passion project, and I look forward to what comes in the following issues. Unfortunately, this first issue is so heavy handed with its themes that it almost comes off as parody. The comic holds your hand and makes sure to eliminate any subtlety by having the characters spew out exposition on every page.

Another let down was this issue’s handling of the slasher genre and its lack of awareness of what actually makes those movies entertaining. I could definitely understand the lack of interest from the cops if this was like an actual slasher flick with Harry showing up once or twice a year to kill a handful of camp counselors or college kids at a party. That could work. Harry showing up and killing hundreds of people every year in public and no one cares? It’s too much of a stretch, and the world isn’t fleshed out nearly enough for it to make sense. I’m hoping that issue No. 2 feels more organic and that the writers start playing around more with the subgenre.