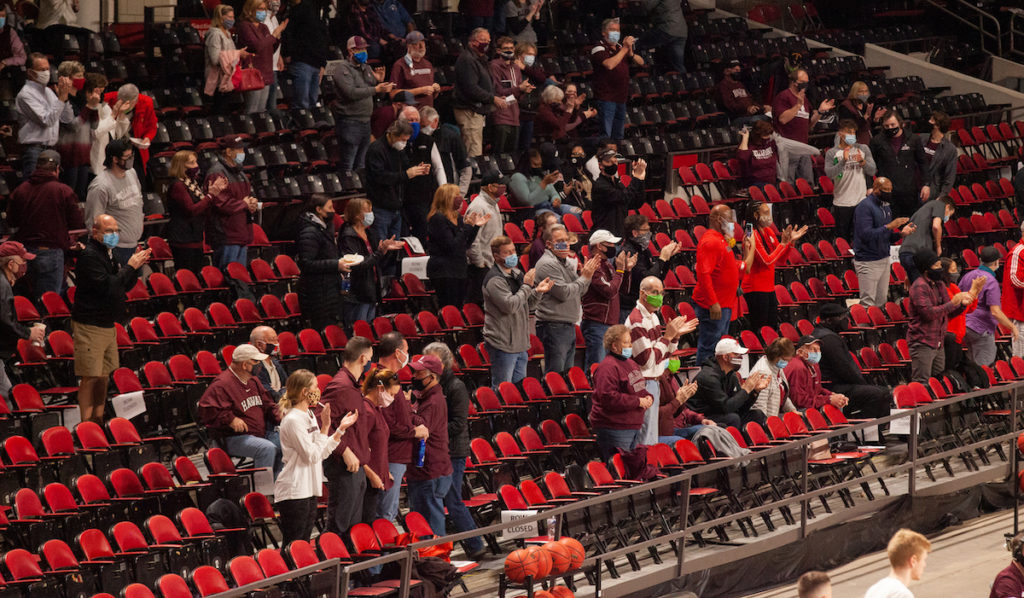 After a year without most concerts and live events, Freedom Hall is starting the year by bringing thousands of fans to the venue — a slow but impactful start on Louisville’s road to economic recovery. As performers and athletes return to Freedom Hall, fans and tourism officials are hopeful that it will be a bellwether for a return to normalcy.

Christian hip-hop performer Toby McKeehan, better known by his stage name, TobyMac, performed at Freedom Hall last Friday night with a few other Christian groups and performers. The concert was the first indoor show that Freedom Hall has hosted since the World’s Championship Horse show held during the Kentucky State Fair with only close contacts of the riders in attendance, and it was the first arena concert in Louisville since The Lumineers played at the KFC Yum! Center last March.

McKeehan is not the first Christian artist to return to live shows. In Kentuckiana, larger-scale touring groups, including the Australian Christian pop duo for KING & COUNTRY, have performed. KING & COUNTRY did a drive-in show at the Kentucky Exposition Center in October. A week before that, Casting Crowns performed at a drive-in in Mitchell, Indiana.

McKeehan, through both his touring company Awakening Events and his PR representative, Velvet Kelm, declined multiple requests for comment and did not allow any media passes to the show.

But his fans — who call themselves “Diverse Citizens,” after TobyMac’s touring musicians, DiverseCity — shared photos and videos of the events throughout the night. In the videos, fans in masks danced to his songs.

The next day, fans of the Bellarmine University men’s basketball team brought that same enthusiasm to the arena for the team’s last game of the regular season, their tenth in Freedom Hall. Even throughout the gestures of a normal game — standing up to clap and cheer, yelling at the referees about a contentious call — most fans kept their masks on and stayed in their “pods,” groups of seats in the same row. Freedom Hall also had hand sanitizer stations and signs about mask-wearing posted throughout the venue.

The team normally plays in Bellarmine’s own Knights Hall, but a recommendation from Gov. Andy Beshear to limit venue capacity to 15% meant that the team had to find a larger venue for their games, according to a press release from Bellarmine Athletics. In a regular year, Freedom Hall can accommodate more than 18,000 people.

On Saturday, 2,787 fans showed up to that final Bellarmine game — nearly 600 more than a totally-packed game at Knights Hall in a normal year would have allowed. By comparison, the UofL men’s basketball game at the Yum! Center against UK brought 3,281 fans, according to the game notes.

It’s not just the fans who are feeling the impact of a return to arena shows. Officials in the tourism industry are also grateful that venues like Freedom Hall are starting to drive people back to events that generate income for the city’s economy.

Stacey Yates, vice president of marketing communications for Louisville Tourism, says that bringing shows back, even at reduced capacity, is a hopeful sign for the industry as a whole.

“It seems so small when we were comparing numbers of 10,000 and 20,000 at concerts previously,” said Yates, “but it’s a step in the right direction.” She attributed the public’s interest in live events to “pent-up demand,” which she feels will be a significant impetus for tourism.

Yates said that before the pandemic, Louisville’s reputation as a tourist destination was on a “positive trajectory.” She added, “Once doors fully open, we have no reason to believe that we won’t pretty quickly recapture that.”

One significant key to the city’s recovery, though, isn’t inside Freedom Hall — it’s outside, in the parking lots. Medical professionals are using the parking lots outside the KEC complex, which includes Freedom Hall, as sites for vaccine distribution. While not as exciting as a championship game or a concert, getting Louisville vaccinated will be the strongest way forward to make sure that the return to live events ends on a high note.