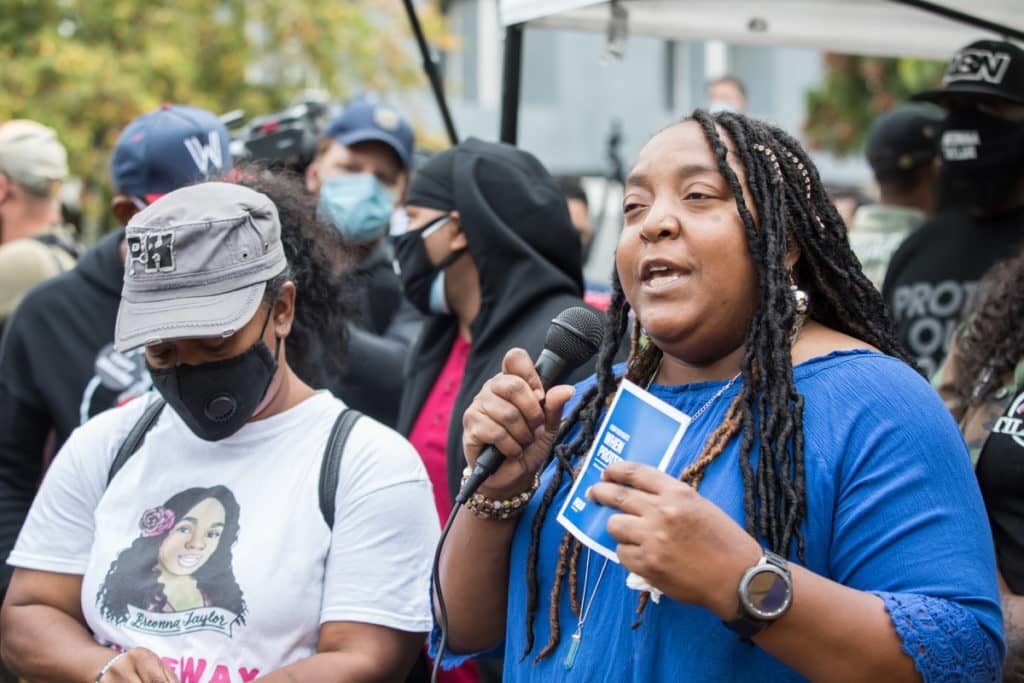 This is the final part of a two part series about grassroots candidates in the 2022 Louisville mayoral race.

When Tom Owen ran against “the power brokers and the tall downtown buildings” in the 1998 Democratic primary for Louisville mayor, he nearly beat them.

“I think the election came too soon. We were actually building momentum,” he said with a laugh. “I had been on town council as a moderately visible council member for eight years, but [former Kentucky Attorney General] Dave Armstrong had such a — much, much more name recognition than I did. So, he was able to raise almost instantly much more money than I did. But we were catching up on the fundraising, and if the election had been three weeks later, we might well have beat him.”

Twenty years later, when Ryan Fenwick, a progressive lawyer, ran a campaign against incumbent Mayor Greg Fischer, he finished with just over 12,052 votes compared to Fischer’s 54,554: far short, he said, but much better than many expected.

A candidate outside the political or business elite, running a grassroots campaign fueled by normally-disenfranchised voters, hasn’t won Louisville mayor’s race since at least before Owen ran. This year, some Kentucky political observers expect more to declare for the Democratic primary than usual because of a community politically energized by Louisville’s racial justice movement and the killing of Breonna Taylor. One already has announced: Shameka Parrish-Wright, a community organizer and bail fund manager who says she wants to be the voice of the people. But, how can a grassroots candidate win? An outsider candidate is still a long shot, according to Owen, but he and Fenwick see a path. It involves uniting voters, creating new ones and savvy fundraising.

Nationally, candidates leading grassroots campaigns have won in different types of races. U.S. Rep. Alexandria Ocasio-Cortez, a bartender with limited political connections, beat a longtime incumbent by energizing young voters and utilizing social media. Past Louisville mayor’s races have had roadblocks to grassroots campaigns that may no longer be there. Owen needed more time to win his election. Parrish-Wright has that, having announced her candidacy 16 months before the primary. Fenwick was a lone David facing a Goliath. A large field is expected in the Democratic primary, and Fenwick said that might benefit Parrish-Wright.

“Now, if you start to look at a primary like the one we’re going to come up with next, with about eight candidates in it or six candidates or 12 candidates, you get a deep primary like that, if someone who’s progressive can find a similar 12,000 voters, it may take even less than to win such a crowded primary,” he said. “So I have a lot of optimism that a candidate like Shameka, with a lot of credibility in the progressive circles of our city, I think she can do great.”

If there’s a crowded primary, Owen said he could see the new voter base created at Jefferson Square Park (the heart of the protests) electing a candidate like Parrish-Wright. But, he also expects a “winnowing” of grassroots candidates the closer the election draws. As that happens, the question becomes “how do you winnow without abrasion,” according to Owen. Because, if you lose grassroots candidates and their supporters don’t want to back a remaining option, the political outsiders remain iced out.

Fenwick said that, for a progressive candidate to win the primary, he thinks Louisville’s most left-leaning voters are going to have to unite behind one candidate who’s really going to change the city.

“Everyone who runs in this primary is going to run as a progressive and a lot of the candidates who aren’t, by my standards progressives, are going to spend millions and millions of dollars making the point, you know, five, six times a day on television in 30 second advertisements, that they’re progressive,” he said. “And I hate to say, that’s going to work on people if, you know, we progressives aren’t willing to get out there, talk to our neighbors and really help everyone see that it’s really in all of our best interest to help elect somebody who’s really going to be focused on the working class and really be able to get to it and fix some of things that are wrong in this city.”

To win, a grassroots candidate would have to significantly broaden their base, said Owen.

“One of the things that I’m going to do is include those voters that are registered who typically can’t vote,” she said.

Since she announced her candidacy, she’s already been contacted by her 20-year-old daughter’s friends and people with felonies who recently had their voting rights restored, telling her that they haven’t been voting, but they’ll vote for her. Fundraising is also an important component to a successful grassroots candidate’s campaign (as it is to any campaign). Fenwick believes that the role of money has changed in elections with the prominence of social media.

Fenwick raised money for his campaign primarily through small donations from people with Kentuckians for the Commonwealth, the Democratic Socialists of America and from other corners of the city. And, he thinks Parrish-Wright can do better than he did. Parrish-Wright said she has experience with grassroots fundraising, and she plans to heavily rely on individual donations from all over the city, state and the country. But, she also wants to approach the wealthy families of Louisville that fund mainstream campaigns and make her case to them, too.

“I might not have all the direct connections from those families, but I’ve been at many tables with them and I am going to pitch my campaign to them as something that the people believe in,” she said.