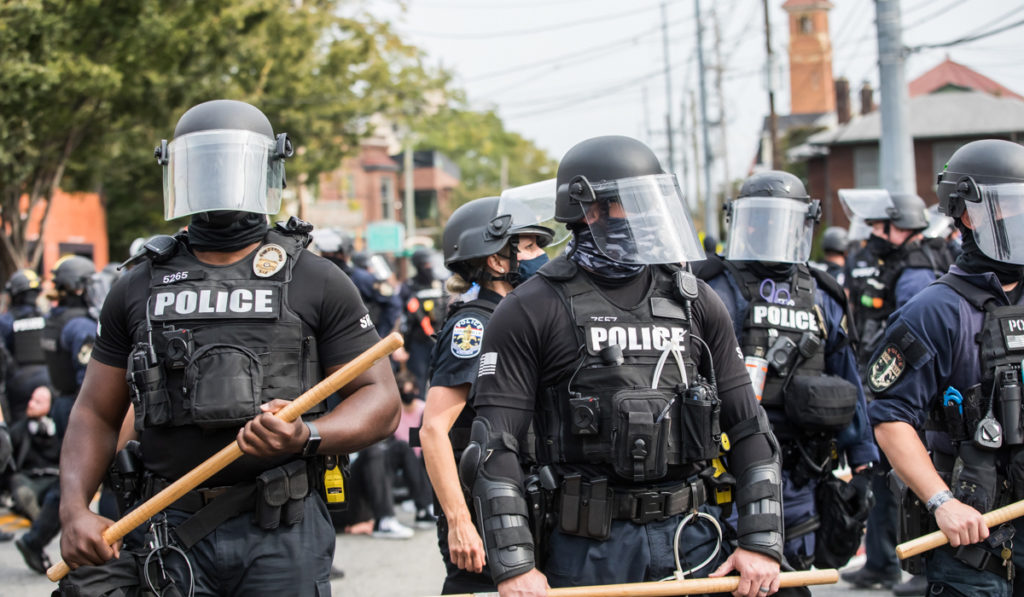 Police formed a perimeter around protesters who had been arrested last September.

Some police reform bills are seeing bipartisan support in the Republican-controlled Kentucky legislature after a year that saw several well-publicized police killings of Black people across the country, including in the Bluegrass state, where Louisville Metro Police Department officers killed Breonna Taylor in a botched raid while executing a no-knock warrant.

“I think there’s no question that the events of the last year have moved the needle in my caucus and in the legislature as a whole,” said Republican state Sen. Whitney Westerfield, a co-sponsor of the sexual assault bill and the chair of the Senate Judiciary Committee, who called Breonna Taylor’s death, as well as George Floyd’s, “horrific murders.”

State Rep. Nima Kulkarni, a Democrat who is also co-sponsoring several police reform bills, said when she was first elected in 2018, the conversation in the legislature mostly revolved around criminal justice reform. But this session, that has changed.

“I think suddenly policing reform is bipartisan on some level,” she said. “You’ve seen movement in the Senate, you’ve seen discussions.”

Legislators are still coming at the bills from their own perspectives: Kulkarni, who is co-sponsoring several reform bills in the House, is an immigration attorney who said she has seen the poor treatment of her clients at the boot of law enforcement, and she’s a Louisville legislator who has experienced living in one of the U.S. cities most roiled by police brutality protests. Sen. Danny Carroll, the primary sponsor of the decertification bill (SB 80), is a former police officer from a small town in southwestern Kentucky.

Also, some Democrat-sponsored police reform bills remain untouched by the majority party, including the ones Kulkarni is co-sponsoring — even Breonna’s Law, from state Rep. Attica Scott. That bill would ban no-knock warrants and require Kentucky law enforcement to wear body cameras while on the job.

A Senate bill regulating no-knock warrants hyped by Republican Senate President Robert Stivers has also not appeared yet. But, Kulkarni still has hope for the rest of the session.

To get meaningful reform passed, Kulkarni said that all stakeholders must come together: legislators, community members and players in the criminal justice system.

When Minneapolis police officer Derek Chauvin knelt on the neck of George Floyd, killing him for nothing more than suspicion that he had tried to pass off a counterfeit $20 bill, Daviess County Sheriff Keith Cain said that police officers from all over found the situation unacceptable and wanted the officers responsible held accountable.

Cain also spoke at an Interim Joint Committee On Local Government in July for the Kentucky Sheriffs’ Association about possible no-knock warrant legislation. There, he said that no sheriffs in the state he spoke to supported their use.

Last week, Cain told LEO that tragedies like Floyd’s death can wear down trust between police and their communities, even in distant jurisdictions like in Kentucky. And, he said that these frayed relationships need to be addressed.

“We understand that in a time when many of our communities have serious questions about whether the people who are sworn to protect them will actually be held accountable if they violate that oath, I think it’s incumbent upon us to answer those questions,” he said.

Police reform was already something on Rep. Kulkarni’s mind prior to 2020, but police reaction to Louisville protesters and revelations that Kentucky State Police training materials contained quotes from Adolf Hitler have also impacted how she thinks about reform.

Sen. Carroll, the sponsor of SB 80, seems to have been influenced by this year’s protests against police brutality, too. He did not respond to a request to comment from LEO, but he did speak at a committee hearing about his bill.

“You all know over the past year it seems law enforcement in the United States has been under attack like never before in the history of our country,” said Carroll. “These attacks have been based on the action of a few officers.”

This philosophy, that police reform is a matter of rooting out the “bad apples,” is a popular one. But, Kulkarni said that this approach doesn’t get to the root of the problem.

“There is something very fundamentally wrong with the way we police our communities,” said Kulkarni, “and that is going to require reaching into the why we have such disparate treatment of Black and brown communities.”

Even with organizations and legislators publicly saying they’re supportive of reforms, though, some bills are having trouble getting anywhere.

THE BILLS AND THEIR PROGRESS

This summer, Sen. Stivers started drafting a bill to regulate no-knock warrants. He said he hoped that it would be a priority for the General Assembly. But, Stivers has not publicly addressed the bill since the session began. He also did not respond to a request for comment from LEO.

Rep. Scott, meanwhile, pre-filed Breonna’s Law before the session started. In addition to banning no-knock warrants entirely, her bill would require law enforcement agencies to release body camera footage to the public in the event of a misconduct complaint (and no privacy concerns) and require drug and alcohol testing for officers involved in a “deadly incident.”

Scott told LEO she was too busy to be interviewed for this article and referred comment to her co-sponsors, Rep. Kulkarni and Rep. Lisa Willner.

Kate Miller, the advocacy director for the ACLU of Kentucky, which has endorsed Breonna’s Law said that, typically, bills that have Republican sponsors are more likely to pass. Breonna’s Law only has Democrat sponsors and has yet to be assigned to a committee.

Such is the case for additional bills that Scott, Kulkarni and other House Democrats are co-sponsoring, including a “demilitarization bill,” HB 244, that would ban police departments from receiving surplus military equipment, require de-escalation training, limit the use of crowd-control weaponry at protests and ban a tactic called kettling, which involves boxing protesters in. Another bill, HB 245, would reinforce existing law that allows the public to record police officers.

The police reform bills that are making progress are bipartisan. SB 80 is sponsored by Republicans and Sen. David Yates, a Louisville Democrat. And, SB 52, the bill outlawing officers from sexual activities with those in custody, is sponsored by Democrats with the exception of Sen. Westerfield. (It also mirrors a bill sponsored in the House by Reps. Scott and Kulkarni.)

SB 80 would expand the kinds of offenses that a Kentucky police officer could be decertified for, adding excessive or deadly force; interference in the fair administration of justice; and engagement in a sexual relationship with a victim, witness, defendant or informant in a criminal investigation. Officers would no longer be allowed to resign or retire before internal investigations are complete, which can be done currently to avoid decertification. Finally, the bill would require officers to intervene if a colleague was using excessive or deadly force.

But, the legislative session is not over, and neither are hopes for more progress on police reform bills.

The deadline to file legislation for this session has been extended to Feb. 23. Cain said he was told by the Kentucky Sheriffs’ Association’s legislative committee that Stivers’ no-knock legislation might still be introduced.

Kulkarni, too, said she is weighing the possibility of introducing another reform bill she thinks might have bipartisan support: Legislation that would provide funding and consistent policies for police body cams across the state.

To ensure holistic reform, Kulkarni said she hopes to see work on police reform continue after the session ends — in the interim, before the next convening of the General Assembly.

“It’s the time when you’re not voting on bills but you can have discussions and you can have real, in-depth analysis of what bills could be introduced… what are the real issues,” she said.