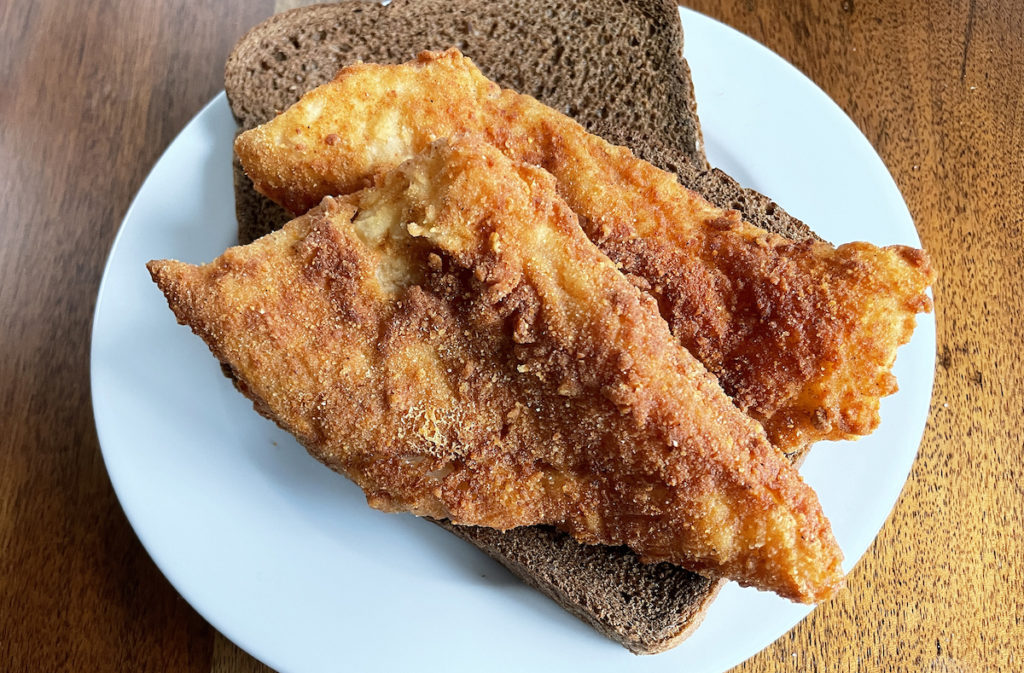 Sal's offers its fresh-fried Icelandic cod on your choice of white bread or dark, aromatic rye.

I realized the other day that Ash Wednesday and Lent are coming up, so this is the season when Louisville food writers are supposed to talk about fried fish … and all the Friday fish fries at Catholic (and a few Episcopal) churches around town.

This was a challenge. Like just about everyone in Louisville, I love fried fish. But I love pizza too. Could I do both?

Luckily, one of my favorite neighborhood pubs, Sal’s Pizza & Sports Pub in Lyndon, has both good, old-school pizza and one of the best fried-cod sandwiches around.

Before we get to that, though, what’s up with the Lenten fish fries in this pandemic year? Like the rest of the restaurant scene, things look different. “Parishes are having fish fries, but they’re almost all carry-out or order ahead, and in some cases the menu may be more limited,” said Cecelia Price, chief communications officer at the Archdiocese of Louisville.

Despite our inland location, Louisville loves seafood all year ‘round, and that’s been so for generations, all the way back to the late 1800s, when L&N express trains would rush fresh fish and oysters on ice up from the Gulf to a hungry public. A lot of that hunger was driven by German and Irish Catholic immigrants who chose fish on Fridays, especially during Lent; and the tradition endures to this day.

Several local eateries serve seafood and fish, and many of them feature mild white fish, often cod, fried in a crunchy coating. It may be served on a bun or bland white bread, but deep Louisville tradition calls for rye bread — perhaps in a nod to the German share of our immigrant heritage.

I’d be hard pressed to name a local favorite, but I keep coming back for the fish sandwich at Sal’s Pizza & Sports Pub. Pizza may be the eatery’s middle name, but that cod sandwich, which they not-so-shyly call “Our Famous Fish,” is as good as I ever ate.

Sal’s fish sandwich is $9.99 with two pieces of Icelandic cod, a bag of potato chips and a pickle; as a platter with cole slaw, hushpuppies and fries. It’s $15.99 with white, wheat or rye bread. I recommend the rye.

There’s a kids menu, a $30 pizza for families that will feed 8-10 and, of course, Sal’s cozy neighborhood bar stocked with liquor, beer and wine.

I called in our order and picked up dinner just after Sal’s 3 p.m. weekday opening time. I’m pleased to note that a thoughtful notch in the paper bag to let out steam might have otherwise turned that crisp breading mushy.

The fried fish sandwich ($9.99) was moist and flaky with steam still rising from the fish after the trip home. It came with two large slices of dark rye and two boneless cod fillets even bigger than the bread. The fish was coated with a crisp, golden cornmeal crust that was a bit on the salty side but not enough to complain about. The cod was pure, flaky and delicious, mild as cod should be with a good, clean fish flavor. The rye was thick-sliced, dark brown and seedless, with just a touch of sweetness and that good, robust rye flavor that goes so well with fish.

After all that talk about fish, I hate to give the pizza short shrift. It’s a good, simple pie, nothing artisanal or elevated about it, just a good, old-school Louisville thin-crust pizza that shows its family-Italian roots. I added mushrooms to a 10-inch pizza ($9.99 plus $1.59 for the topping). The crust was thin and cracker-crisp, adding a light char to its wheaty goodness from the pizza oven. The tomato sauce was lightly applied, as it should be, rough-textured with a deep tomato flavor and just enough peppery spice to give it a little kick. The mushroom bits were tiny and tender, completely covered by a thick blanket of stretchy mozzarella.

A side order of Sal’s slaw ($1.99) was well-made and appetizing: Chopped crisp cabbage with bits of carrot julienne and green onion tossed in a thick, creamy slaw dressing.

A filling meal with plenty of leftovers came to a very reasonable $24.97, plus a $7 tip.