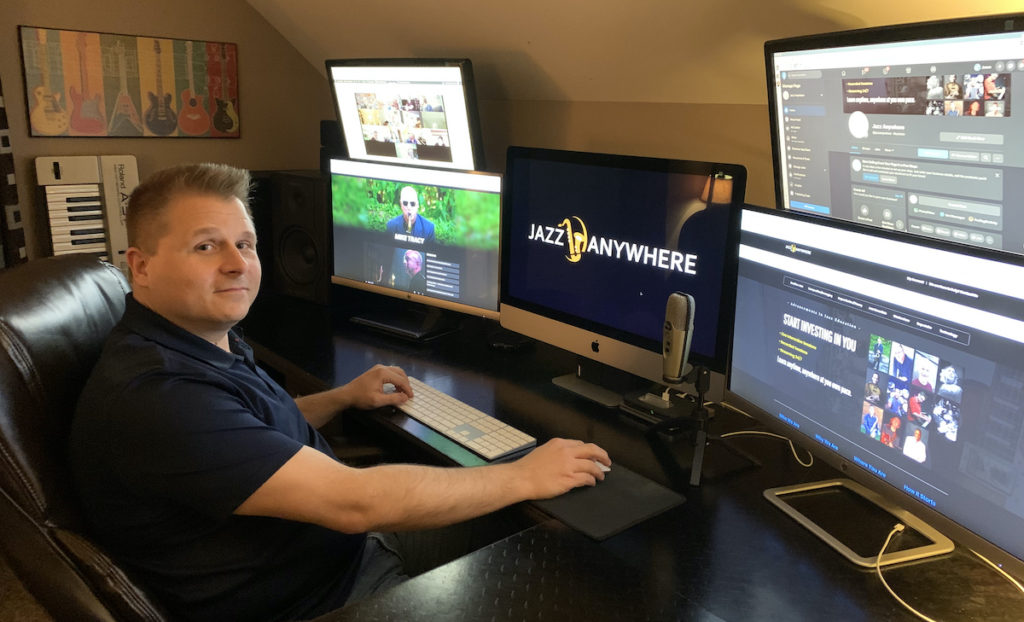 In 1964, when a saxophonist named Jerry Coker published a slender self-instruction book called “Improvising Jazz,” the reaction in some quarters was hostile.

Rudi Blesh, one of the most influential jazz critics and historians of the time, wrote, “The usefulness, or the advisability even, of this book may be seriously questioned. The project of jazz pedagogy smells faintly but unmistakably of the smug arrogance of the current academic belief that aesthetic creativity can be taught. This is rubbish, as any real artist knows.”

It was a prevalent romantic dogma that jazz could not be “taught.” And, for the most part, nobody was trying to. In 1964, only a single American university — the University of North Texas — offered degrees in jazz.

Coker’s book has never gone out of print. And, for generations of aspiring musicians, it represented a radical idea: that you could study jazz anywhere. That’s the very idea that animates Jason Lindsey, who has recently launched a jazz education website called, appropriately enough, Jazz Anywhere.

Lindsey is a web developer (DreamchaserDesign.com) who is deeply connected to the world of jazz pedagogy. As a teen, he took a job with Jamey Aebersold, whose library of instructional jazz recordings is an influential force around the world.

In addition to furnishing tech support and consultation to Aebersold, for 20 years he’s been the administrator of Aebersold’s annual summer jazz workshops, sprawling affairs that bring students from all over the world to work with renowned players and teachers in Louisville, where the workshops have long been hosted by the UofL School of Music Jamey Aebersold Jazz Studies Program, which is led directed by saxophonist Mike Tracy.

In a phone interview, Lindsey said that in 2017 he had an insight. For years he’d been observing the urgency, the excitement and the sense of community forged during the summer camps. He was immersed in the technical innovations around audio, video and wireless communication. And though he wasn’t sure how it might all come together, he purchased the web domain jazzanywhere.com.

It wasn’t on Lindsey’s “front burner,” he said.

And then came the pandemic. And the cancellation of the jazz workshops. And then came a conversation with Tracy, who was thinking of offering a few online Zoom classes just as a stopgap summer offering.

And gradually an idea took shape: instead of just a few one-off sessions, why not build out a fully-functional educational platform, robust and flexible enough to serve the musical and pedagogical  needs of both jazz instructors and students, while building in ways to give students the individual feedback and sense of community that are so prominent during the face-to-face summer workshops?

That is what jazzanywhere.com has rapidly become. A few months ago, I observed an early offering: a saxophone master class taught by Tracy. The students on the Zoom screen were dispersed across the continent, instruments at their sides. Earlier, they had sent Tracy recordings of solos they’d played over backing tracks. And the discussion after recording was animated and engaged. A two-minute solo stimulated not just technical issues, but reflections on taste and aesthetics, specific suggestions and observations. Although it was a “master” class, everyone in the session took part — and all this with instruments in hand.

In some ways, we’re living in a golden age of online musical instruction. Via YouTube, you can find lessons on just about any subject. But the core essence of musical instruction is getting feedback from an expert teacher who listens and gives feedback, and that’s a rare, and generally expensive commodity.

Jazz Anywhere classes typically run eight weeks and cost $150. Some are fully live, some are a mix of live and/or recorded instruction. All classes are archived for attendees to view at any time, and into the future.

This week a slate of more than a dozen courses are open for registration. Students can register late, without missing anything. And this is a small enterprise, not a large bureaucracy. Lindsey says that messages left on the websites contact link go directly to him. So if you have a question, send it on.

Offerings are available for interests broad and specific. There are five sessions on Latin jazz, ranging from introductory concepts to full-blown studies of Brazilian drumming. There are sessions on jazz composition, electronic media, master classes for sax and piano and varied approaches to harmony and improvisation. There is also Tracy’s “Listening to Jazz” course, which sounds like an old-fashioned listening party where great music is played — and then discussed in the detail by a critical ear.