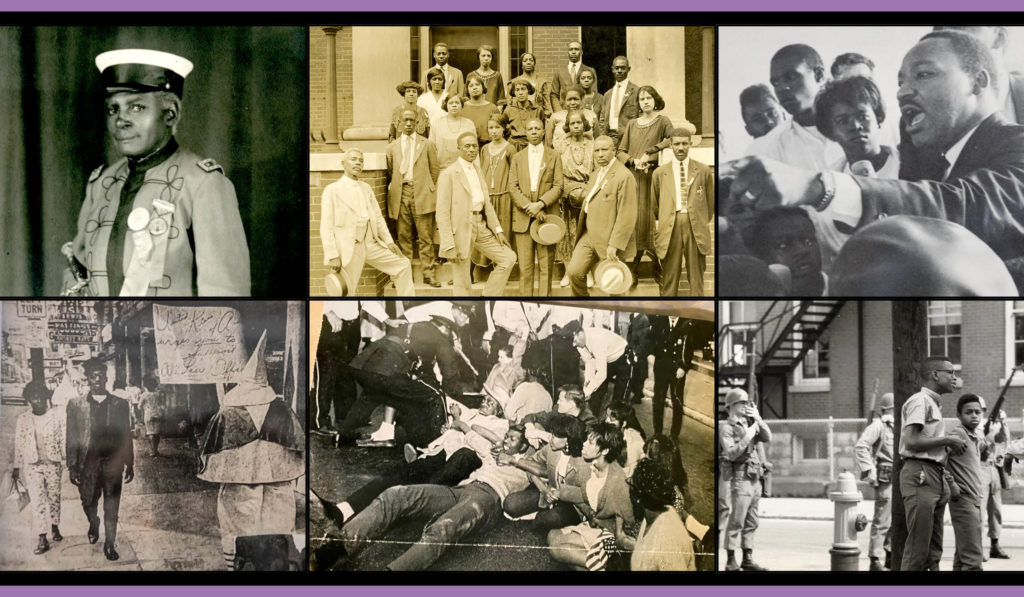 From top left: Dinnie Thompson (c. 1857-1939) is pictured in her lodge clothing of the “Sisters of the Mysterious Ten,” the women’s auxiliary of the United Brothers of Friendship, a black benevolent association in Louisville; Mammoth Life and Accident Insurance, Co. Photograph Collection (1915-1992) was one of the largest Black-owned and operated companies in Kentucky's history; Martin Luther King, Jr. speaking; The Ku Klux Klan on 4th Street; A Civil Rights protest in Louisville; National Guard in Louisville following the assassination of Dr. Martin Luther King, Jr. | Photos made possible by Roots 101: African American Museum, Kentucky Center for African American Heritage and The Filson Historical Society.

On the 19th of December, 1875, the father of Black history was born. Twenty-two years later, he walked through Berea College’s doors and enrolled as a student. It was a miracle of determination. Like many Black children of his time, his labor was necessary, his education secondary. His parents walked right out of American slavery into abject poverty. Toiling on farms and working the dusky Virginian coal mines robbed his childhood of formal education. As a young Black man in 20th-century America, he’d beat all odds making it to the university. His name was Carter G. Woodson.

I wonder if it was while studying literature at that small college in Kentucky where the lack of Black history became visible. For it was invisible everywhere, on the book-filled shelves of public libraries, on the crisp pages of school textbooks, from the lips of college history professors, and the consciousness of young Black boys and girls.

Perhaps Woodson was like many students today, noticing the absence of humanity in Black narratives. Like the many disillusioned with history. Wondering why Black people have yet to be considered, for example, as an integral part of American history, and as such, are not part of mainstream American memory.

I’ve long noticed that Black history is segregated and taught in isolation — kept away from white narratives like a form of academic apartheid. Expressing these same frustrations, Woodson created Black History Week in 1926, which later became Black History Month. The idea was to deepen the knowledge and study of Black history all year long. So in his mind’s eye, Woodson saw a future where this short celebration would no longer be necessary. Hopeful that America would embrace Black people and their past as part of the American present. And here we are. Celebrating Black History Month nearly 100 years later.

The only time America gets long-winded about Black history is during the shortest month of the year. In February, we learn about the civil rights struggle of Martin King. The million-dollar dreams of Madam C.J. Walker, and the peanut inventions of George Washington Carver. All presented as noble and heroic. Real as that may be, this history does not tell the whole truth of Black history. It’s a highlight reel. We get a glimpse of exciting moments, but it doesn’t show you the entire game.

Where are the sprawling empires of Africa in our studies? What about the Black presence in Europe? In these short 28 days, we don’t dive deep enough into the slave trade, historic prison systems, Jim Crow, lynchings, police brutality, redlining, voter discrimination or institutional racism. I imagine this is the real reason why white society doesn’t want to integrate Black history. To do so, you’d have to talk about American atrocity, which doesn’t fit the American branding of the brilliant founding fathers and the grand ideals of American democracy.

Then there is the 90-plus% of white Kentucky teachers who struggle to teach Black history in meaningful ways. Let’s not pretend that unconscious bias, racial anxiety and stereotypes don’t make it into classrooms. So our Black children, having seen the spectacular failure of American institutions to include their history, begin to see themselves outside of America — they fail to see themselves. White kids, some with little to no other encounters with Black people, only see them through pop culture, music and media.

What do we do in the face of all this? It seems to me that, the same institutions that mandate Black students to show up to be educated, should be mandated to teach those students the breadth and depth of their history. They owe it to all students to provide a diverse history education. It also makes sense that those who know they are ignorant of this history take the initiative to learn it, even if they are already into adulthood.

James Baldwin said, “History is not the past. It is the present. We carry our history with us. We are our history. If we pretend otherwise, we are literally criminals.” It is criminal. Criminal that we don’t acknowledge, for instance, that our police forces started as a slave patrol and that many of those historical tactics and attitudes toward Black communities exist today. Criminal that we don’t admit that redlining has been flatlining Black opportunity since the 1930s. Or that Louisville has never been neutral. They say our city joined the Confederacy after the Civil War was over. Because ex-Confederate officers entered all significant institutions and took control of the town. It turns out, this history is alive and well, thriving in the present than most ever wanted to acknowledge.

The fact is real Black history should affirm Black humanity in all the fullness of the human experience. It should demonstrate Black achievements from all over the world — from the medieval empires of Africa to the first Black Republic of Haiti, to the stories of Black musical genius. Then teach everything in between. It needs to show that Black achievement lies in revolution toward democracy just as much as it does in hitting a baseball or being the first doctor in a white institution. It should strive to tell the truth about racism, slavery and American brutality.

As long as America embraces Black History Month as it is, we are saying we are fine with its segregation and separation. That a short 28 days is enough for Black people — the rest of the year, America can forget about it. So no, it isn’t enough to highlight a few Black celebrities and activists with sanitized legacies. Black History Month should affirm a commitment to advancing real solutions to anti-Black racism and also affirm the uniqueness of the Black experience. It’s not only a time to celebrate achievements, but to tell the entire story and the truth about racial inequality.

With considerable voids in the average person’s Black history knowledge, it’d be a shame to leave you without recommending some books. For only knowledge of a thing can replace the absence of it. Yet, it is impossible to narrow down a limitless Black history into a few book covers. So don’t take this as an attempt. Instead, it is a list of books that shine brightly in my mind, ones that, in all their brilliance, have found permanent residence on my ever-expanding bookshelf.

I chose this humble collection to share here because it spans global, American and Kentucky Black history. Let these books be but a stop, a place to pause and reflect. Then, continue your lifelong journey to explore Black historical narratives.

“Racial Violence In Kentucky: Lynchings, Mob Rule, and ‘Legal Lynchings’” by George C. Wright
George C. Wright brings to life a forgotten chapter in Kentucky history of great importance — anti-Black violence still brutally relevant in our own time. He shows how Jim Crow racial terror was prominent in Kentucky and how Black people resisted and fought against it. I highly recommend this book to anyone. Kentuckians cannot afford to avoid this painful past.

“Black Reconstruction, 1860-1880” by W.E. Burghardt Du Bois
At 700 pages, this book is deep. But as it is with many precious gems, the ones buried deepest often shine brightest. It is a truly phenomenal work on the Reconstruction period in America. It will enrich you. It is beautifully written by Du Bois, who is, among many great minds, one of my favorite scholars and the one who most often connects history to the present. His main argument is this: America failed Black people after slavery and failed to uphold its ideals of democracy. A must-read.

“Africana: The Encyclopedia of the African and African American Experience” by Kwame Anthony Appiah and Henry Louis Gates
Never underestimate the power of a good encyclopedia, as they hold a wealth of knowledge. This one-volume encyclopedia attempts the impossible — cataloging the African diaspora’s entire history, all within a massive 2,095-page book. No one could do it, but no one could make a better attempt than Appiah and Gates. Get this one used. If you find a new one, the price tag is as hefty as the book.

“Bone Black: Memories of Girlhood” by Bell Hooks
Bell Hooks stands out as a towering foremother of Black feminist thought, but many forget she was first a daughter of Kentucky. This poetic memoir tells the story of a poor Black girl growing up within a racially-segregated Appalachia. In it, she covers everything from racism to domestic violence.

“Autobiography of Malcolm X” by Malcolm X & Alex Haley
Every once in a while, you read a book, and it changes your entire life. For me, “The Autobiography of Malcolm X” is one of those books. It stands as overwhelming proof that people can change. No, not change, but completely and utterly transform themselves. Malcolm X was willing to question society with anger as extreme as the extreme conditions of Black people in America. He speaks to the tragic, but by the end of his life, also to the hope found in the human experience. This book will challenge the way you view race in America. A masterpiece. Words could never do this autobiography justice.

“A Black Women’s History of the United States” by Daina Ramey Berry & Kali Nicole Gross
Women, and especially Black women, have been underrepresented and unheard in the American historical narrative. This book seeks to solve that problem. The authors, importantly, both Black women, take a survey of Black women’s place in over 400 years of American history. A difficult task, no doubt, but the result is phenomenal. The lives and narratives of these women in history are presented in a way that makes you feel like you know them — highly recommended. •

A Special Thanks To The Photo Providers

The historic photos in this article were made possible by local organizations. We wanted to give a special thank you to Roots 101: African American Museum, Kentucky Center for African American Heritage and The Filson Historical Society for donating their resources and time to this article. Roots 101: African American Museum is currently accepting donations via GoFundMe. The Filson Historical Society actively seeks family photographs and materials that help document and preserve a more inclusive story. Questions? Contact Heather Potter, curator of photographs and prints: [email protected] And learn more about the Kentucky Center for African American Heritage’s latest events and exhibits at kcaah.org.