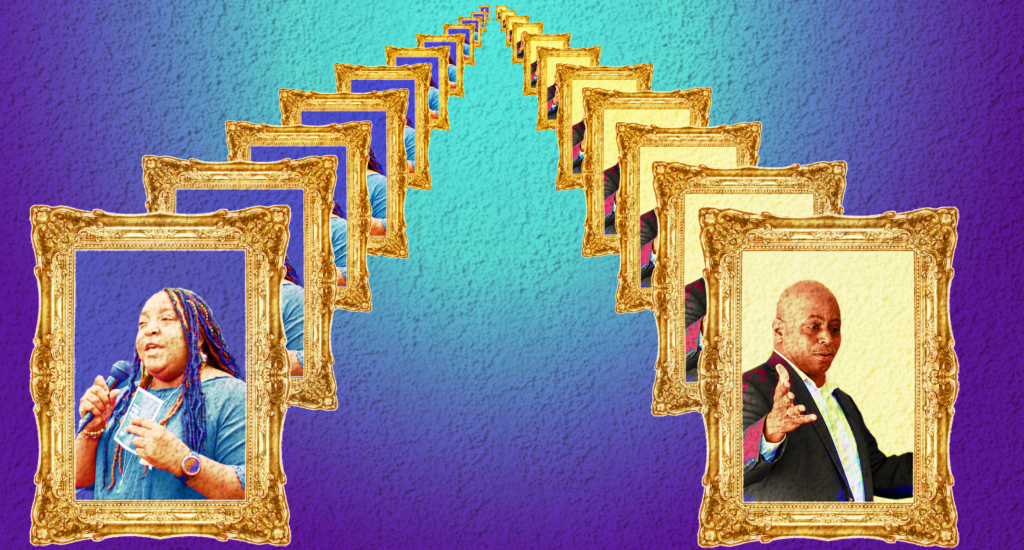 This is part one of a two part series on grassroots candidates in the 2022 mayoral race.

Shameka Parrish-Wright was lying in a hotel bed on Jan. 6 after a day of campaigning in Georgia for the recent Senate runoff election when she received confirmation that Mayor Greg Fischer would be naming Erika Shields as Louisville’s new police chief. Shields, who resigned from her post in Atlanta after a white police officer killed a Black man, Rayshard Brooks, would now be in charge of the police department responsible for killing Breonna Taylor, a Black woman.

So, Parrish-Wright, a bail fund manager and community organizer who has been active at this past year’s racial justice protests in Louisville, posted some news of her own: She’d be running to replace Fischer, who cannot seek reelection in 2022 due to term limits.

“We’ve been saying that behind our protest fist is policy…being elected to office, getting on these boards and planning commissions,” said Parrish-Wright, who is now back home in Louisville. “All of those things are necessary steps to bringing social justice and human services to a level where you and I are directly impacted by it. So we couldn’t choose the chief; we couldn’t decide if those officers are fired, arrested and prosecuted. But, we can get people in place that are going to hold their word and that are going to listen to the people and bring the people’s voice in every way.”

Louisville could see more Democratic mayoral candidates like Parrish-Wright this year — those running from outside the establishment — than in races past, according to some Kentucky political observers. Sixteen months out from the primary, Ricky Jones, a professor and chair of UofL’s Pan-African Studies Department, has also publicly expressed an interest in running. This predicted influx in nontraditional candidates is because of Louisville’s transformative and challenging year, with protests over Taylor’s killing and other racial injustices extending over 150 days (although Jones said this was not one of his reasons for entertaining a run). Grassroots candidates will still be competing against more traditional options for mayor, such as Metro Council President David James, a Democrat who announced his candidacy a little over two weeks after Parrish-Wright did. Louisville residents will have to choose which type of candidate is best for the city: Someone whose draw is experience, or a political outsider with a new perspective.

Colmon Elridge, who was recently elected as the Kentucky Democratic Party’s first Black chair, is one of those who believes Louisville’s racial justice movement will inspire more grassroots candidates to run.

“I think we will see that, and I think we should see that,” he said. “Because, frankly, you know, politicians don’t have a hold on leadership and service. And I think that is important to remember, as well. I don’t dismiss the importance of serving and having an understanding of the mechanics of government. But, you know, I think we’re just at a place where, as important as that is, it’s also going to be important how you connect in the community and how you have carried some of the burdens of the community that haven’t always made their way to the most powerful seats in government.”

Tom Owen, a retired councilman who ran a grassroots campaign for mayor in 1998, said that Taylor’s killing and subsequent protests have created a new coalition of voters.

“In the last 10 months, there’s been some upturning, overturning of the apple cart,” said Owen, who is also a UofL archivist for regional history. “There’s a newly energized voter constituency that came through Black Lives Matter and Breonna Taylor and the controversies there — and new alliances struck. I guess you would say white, African American, progressive alliances are probably deepened.”

He guesses that seven to 12 grassroots candidates might be energized to run for mayor.

Both Elridge and Owen expect that the Democratic primary will be packed with candidates. And that some of those mayoral hopefuls will be more traditional.

James has been long-rumored to be a successor to Fischer. Owen sees him as an obvious candidate by virtue of James being in government so long. James has been on Louisville Metro Council for 10 years. Before that, he was a local police officer and president of the Louisville police union, although, as a council member he has at times criticized the Louisville Metro Police Department ­— notably, former Chief Steve Conrad and the administration’s handling of the Explorer sex abuse scandal. At James’ campaign announcement at a Teamsters Union hall, he told LEO that he sees himself as “experienced” not “establishment.”

“I think that the condition that Louisville finds itself in now, it needs someone with experience and day-to-day operational know-how to get the city back on its feet,” he said.

The day after James’ announcement, Jones, the UofL academic, tweeted his own interest in Fischer’s seat, “I would like to announce that I’m considering running for mayor of Louisville. [thinking emoji] Why not?”

Jones said he wasn’t inspired to run by Louisville’s racial justice movement, exactly, but, partially, by the state of the nation: The country is on a possible “precipice of change” after four years of Donald Trump being president, during which “so many ills” were exposed, such as racial and economic inequality, said Jones.

“So being on that possible precipice opens the door for people who actually are innovators and different thinkers to step into that gap and make some of that change,” he said.

Anthony Oxendine, the owner of Spring Valley Funeral Home and a former candidate for Floyd County, Indiana, coroner, has also said he is running, according to the Courier Journal.

Parrish-Wright, who has experienced homelessness before, said that she would be a different candidate than the rich, white men who have run in the past. And, she agrees that Louisville’s racial justice movement has created a more hospitable environment for her to run in.

“The short answer is yes,” she said. “We are primed for better leadership, for leadership that’s more inclusive, that’s more inviting and is not more of the same, and I think that you have that with me as mayor of Louisville.”

When asked the same question, Ryan Fenwick, who ran a grassroots campaign for mayor in the primary against Fischer in 2018, cautioned against getting too “galaxy brained” about the consequences of a local “inflection point”, but he said he’s excited by what he’s seen happening with constituents in the city.

“That movement has brought out the righteous anger of thousands of people in the city who have never been politically active,” he said. “And I think that can translate into the urgent fact that we have to change things electorally here in the city.”

Fenwick said he is not interested in running again, but he is energized by Parrish-Wright, a movement leader, doing so.

In Jones’ opinion, the people who have announced their candidacy and who are rumored to do so are, for the most part, “wedded to the status quo.”

“It doesn’t seem to me at least, nothing that I have seen or heard thus far, anything that speaks to any type of serious progressive innovation,” he said. “And when I say progressive, I’m not speaking of politically-leaning. I’m talking about progress itself, progressive innovation, or difference from what we have — people who are really rich in thought and rich in creating a new city or a new world.”

Jones, who said he is not fully committed to running, but not fully joking about doing so, either, said he, ideally, could be that person.

Parrish-Wright said, as mayor, she would invest in underfunded programs, such as homeless outreach groups FEED Louisville and Hip Hop Cares, as well as parks, community centers, pools and public health. In her announcement post, Parrish-Wright invoked pretrial incarceration reform, or what is often called bail reform. She also wants police reform, but Parrish-Wright said she is not anti-police. (“What I want is police to be held accountable just the way you and I would if something was to happen.”) And, she isn’t anti-business either. (“I think if we do this right, we can attract the new businesses, we can attract the bigger corporations. We can stop them shutting their office doors and moving to cheaper locales and stay with us and invest in our community.”)

Elridge, the KDP chair, said he appreciates that both announced candidates, Parrish-Wright and James, are different from those who have been mayor before in at least one way: Louisville has never had a Black person in its executive office.

“I am elated to see two African Americans who may have different reasons for running, but who are committed to building a better Louisville,” he said. “As the first African American to chair this party, that is a clear sign to me of where we are going as a Commonwealth.”