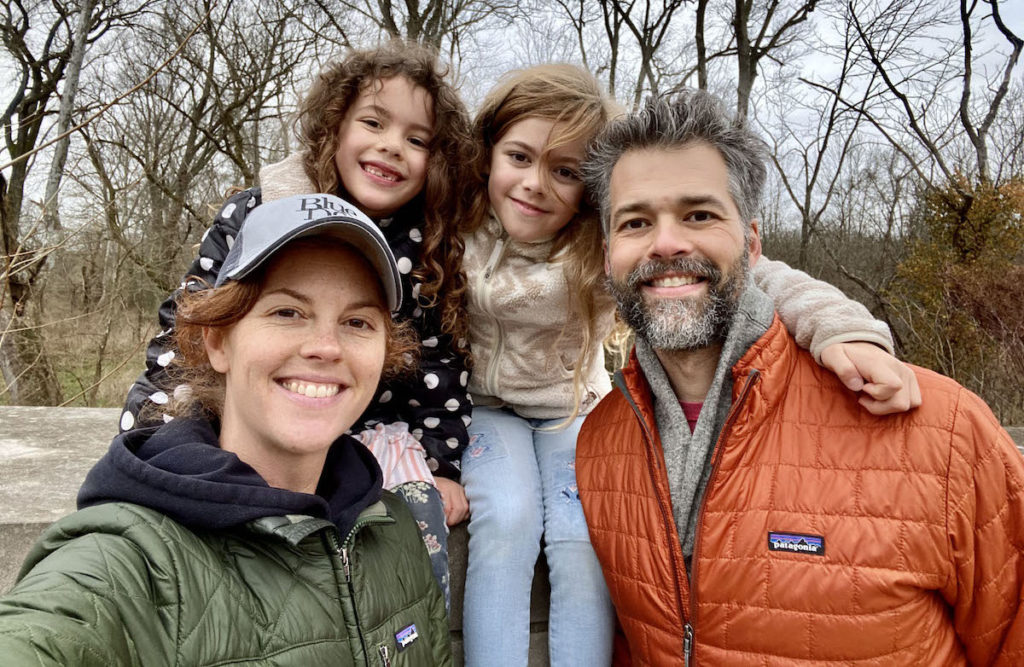 This week, I spoke with five local artists who are trying to answer the “how” about creating with kids, during a pandemic. Some have found a well of creativity, while others are struggling to just feel human. All of the artists for this piece are working with the aid of a supportive partner. That fact can’t be lost. Most are married and some already work at home. These particular sets of circumstances add to the ability for these creators to work. Artists who parent solo don’t have the same luxuries. Sadly, we may find that we are losing valuable work because there simply isn’t enough targeted support for artists in these situations. I invite any artist, who is also solo parenting, to “Talk Back” in the comments and tell LEO how you are managing your work.

Skylar Smith is an artist, an educator and a curator. Smith launched her curatorial “BallotBox” project during the week the first pandemic shutdowns were announced. The almost year-long project, first supported by the city of Louisville and housed in Metro Hall, quickly morphed into an online virtual exhibition supported by 21C Museum Hotels.

Smith is also a mother to two girls, Forest (10) and Eleanor (7). When the pandemic began, she went through the same anxieties as most. There were so many unknowns and she wondered what would happen to her “BallotBox” show.

“When it first started happening, I couldn’t go anywhere,” she said. “Normally I’m out and about. I was doing ‘BallotBox,’ meeting people and that was shut down.”

She wasn’t sure what to do but quickly decided that she needed to focus on something that she could control.

“With COVID and not being able to go anywhere and all the anxiety and questions that we had, it was like making art was saving my life.”

Something felt different about making art during quarantine. It became necessary.

“I’ve never felt like making art mattered as much,” she said.

She found relief in her home studio despite the added challenge of helping her kids with their online schooling. Whenever she can steal a moment, she goes to her studio and tries to do something creative.

“I can work on something for an hour then go help a kid,” she said.

She has scaled her work to a smaller size, letting the constraints of space and on-hand materials dictate what she creates. She chose to use materials that she already had in her home.

Some of the works she conceptualized before the pandemic, but they took on new significance after.

Swiss psychologist Carl Jung believed creating mandalas offered a “safe refuge of inner reconciliation and wholeness,” providing a sacred space to invite the “Self.” He used them to calm his patients.

Making time to create, Smith believes, will make her a better person for her kids.

“I think they know that, too.”

Spoken word artist and Lipstick Wars poetry slam creator, Rheonna Nicole, as she is known on stage, wakes up early to get started on her writing.

“For me, I like to get up early in the morning,” she said. “It seems to be when my brain is operating the best.”

In the wee morning hours, Thornton is either at her desk or hiding in a dark bathroom working on new poems.

Her child is young, so homeschool or NTI hasn’t entered the picture, but the challenges of COVID have touched her as a mom and artist.

“This is a process for both of us,” she says of parenting a toddler who is moving about and learning quickly.

“A lot of times, I’ll perform or write to myself and use her as the person I’m reciting to,” Thornton said, laughing. “She’ll just stop or she’ll start yelling out with me. That’s fun to see how she’ll react to things I say.”

In the pre-pandemic days, Thornton felt that she had more outlets for her daughter whether that was with family or the ability to get out of the house. “Before, I would be able to do a playdate or I felt comfortable going to the park and having her interact with other kids.”

COVID created some sticky situations for Thornton when she had to cancel events.

“Last year was supposed to be one of the biggest years for my poetry events,” she said. “When this happened, this all just came to a crashing halt. It caused me to think outside the box.”

She discovered that by holding virtual events and licensing her “Lipstick Wars” name to venues through the country, she was able to reach a bigger audience and have Lipstick Wars subsidiary events in more places. This included Nashville, Chicago and New York City.

Like Thornton, Gibbs Rounsavall is another early riser, waking up around four in the morning to get started for his day. He and his wife, Sara have two daughters, Edith (9) and Thea (6). At the beginning of the pandemic, he was in a unique position to relocate from his studio behind the house to his new studio at the end of the dining room table.

“I was already primed to handle this in a certain way, but my studio is not conducive to learning,” he said. “So, I had to adjust to working in my house.”

At the other end of the dining room table are his daughters doing schoolwork.

“I don’t even sit down because I’m moving between what I’m doing and what they’re doing so often that it’s inefficient for me to be seated.”

Efficiency is important to Rounsavall, an artist whose work can be seen in public around the city and in many private collections locally. He is a prolific creator usually making larger works. The revamped “studio” space has forced him to also consider the scale of his pieces.

“It’s been interesting, in that, I like to work big in scale but when I moved into the house, that wasn’t really practical,” he said.

He’s also been working in series, which is another change for Rounsavall, who typically would finish one piece and begin something not necessarily related. He’s been able to generate more work.

“I, like everyone else, hit a wall of anxiety,” he said. “I was able to work. I felt a sense of urgency to work.”

Despite working fervently on his creative projects, Rounsavall knew that his kids were going to need a structured environment. Since he had the educational background as an art educator with JCPS, he felt prepared.

“I turned into Mr. Rounsavall on day one,” he said.

He feels that as much as this is a test for his daughters, it’s also “pass or fail for us too.”

“We definitely had a system in place where one of us is usually home,” he said. His wife Sara is an independent food stylist.

Rounsavall feels this time has been precious and that the pandemic has given life a “frontier-like quality.” Despite the isolation, he feels that this moment in history has given his kids something they’ll never forget.

“We are bonded,” he emphasized. “It’s kind of a beautiful thing.”

Lance Newman II (aka Mr. SpreadLove) is well known in Louisville as a multifaceted creative force. His credits are long. Newman is a writer, a poet, a playwright, both a visual and teaching artist. He is busy. To boot, he’s father to four children.

“My 9 year old is homeschooled,” he said. “While the younger children are at daycare, my 9 year old and I are balancing our time between CORE curriculums and our own personal one.”

Creating during the pandemic with even one kid at home is a challenge, but Newman doesn’t shy away from those. He’s gotten used to the ebbs and flows of not having enough time.

“This life of an artist has always fluctuated,” Newman said. “So I’ve learned to be flexible with the timing of artistry and responsibility.”

Newman was a member of the inaugural group of Hadley Creatives. Hadley Creatives is a professional development fellowship for artists sponsored by the Mary Alice Hadley trust through the Community Foundation of Louisville.

He spends much of his time teaching creative writing and performing under his “SpreadLovEnterprise” moniker. Pre-pandemic, he hosted the KMAC Poetry Slam, which was one of the longest running poetry events in the city of Louisville.

Currently, he is using the break to offer virtual poetry workshops via KMAC’s website. The video classes feature both poetry readings and instruction on crafting poems to help future slam poets to sharpen their skills.

“As we speak, I’m fighting off my 4 year old who is pretending he’s a superhero and I’m a bad guy, while my 1 year old imitates her older brother.”

Newman doesn’t believe that the artist has a choice about creating.

“The times are ever changing but the artist must remain consistent in their production,” he said.

He will be playing Mercutio in the Actors Theatre of Louisville production of “Romeo and Juliet” due to air sometime in February.

Laurie Hrdina Shepherd moved to the area from California a little over two years ago. First, she and her husband, Caleb and their little ones, Etta (5) and Gus (2), settled in Sellersburg. Soon after they moved to New Albany.

Shepherd realized that she enjoyed creating as a young child but didn’t explore it deeply. It wasn’t until she finished cosmetology school that she felt the pull of the artist’s life.

“I just started to paint a lot for fun,” she said. “I signed up for a class at a community college. The day before it started, I almost backed out.”

Her fear soon turned to joy. She felt that she thrived in the class and made the decision to return to school for a degree in studio art.

“When I finished with that, I did a short summer program with Yale in France,” she said. “It wore me out.”

She’d been signed up to enter a graduate program, but the pressure of the Yale program made that option unattractive, and she backed off going.

She decided to just explore art on her own.

“Now, I have kids,” she said. “It totally changed it [my art] because I don’t have time anymore.”

For Shepherd, finding time to work is difficult. Her kids are young and require more face time.

Her husband supports her by scheduling his vacations so that she has time to paint.

“We’ve been in survival mode all year,” she said. “It was easier to do art before the pandemic. I was more rested because I got more time away from the kids.”