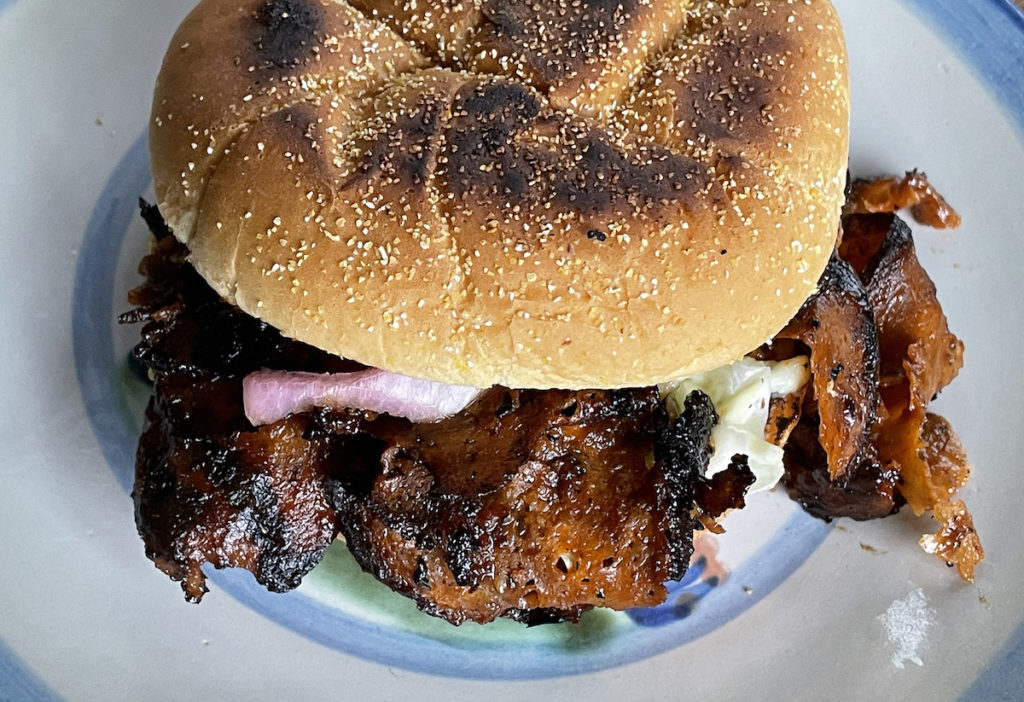 You won't believe you're eating nothing but vegetables when you bite into in V-Grits' delicious pit beef BBQ sandwich with its tender vegan beef with crisp burnt ends and sweet-hot, horseradish-spicy barbecue sauce.

I had a pit beef barbecue sandwich the other day that was so good it made my head spin. And here’s the kicker: This sandwich was vegan, made from vegetables, without a trace of meat.

What do I like so much about V-Grits? We have to start with the food, of course. Chef/owner Kristina J. Addington makes it happen with a commitment to making vegan comfort food – and craft beer, too – entirely from scratch. Addington builds excellent fare that could pass for beef, pork, chicken, ham and more, entirely from vegetables, without any highly-processed or additive-loaded ingredients.

Supporting this toothsome vegan fare is a green, spare-the-Earth-and-all-that-is-in-it philosophy, one that V-Grits expresses on its website: “V-Grits vegan restaurant and Chimera Brewing have strong values — social justice, racial equality, access to healthy food for all, animal rights, sustainability. Join us for vegan comfort food and brewing with benefits.”

What’s “brewing with benefits,” you ask? It’s a commitment of Chimera Brewing Co., the in-house brewery that Addington and her husband, Jeff Hennis, purchased from former in-house brewery tenant False Idol just over two months ago. Every sale of Chimera’s 10 beers returns a portion of its proceeds to a Louisville nonprofit supporting racial equality, food justice, animal rights, foster care and other worthy causes for social change.

V-Grits was around for years as a food truck, meal service and product line, but it landed as a full-service, brick-and-mortar restaurant and brewery in October 2018, taking over a space where The Highlands meets Germantown. The building was once a dry cleaner, that had long housed The Monkey Wrench.

“We are committed to making every ingredient from scratch, including all of our vegan meats and cheeses,” the website pledges. “Let us prove that you can still enjoy flavorful comfort food without animal products. Please use us as a resource for your own food journey. We will patiently answer and help with any dilemma you may face, from wondering where your protein will come from, to attending family barbecues.”

The “vegan Southern comfort food” menu is extensive, with more than three dozen items subdivided into salads, snacks, mac and cheese, skillet fries, sandwiches and such, entrees and a bunch of sides. Pricing makes meat look expensive, though, with entrees and some of the sandwiches topping out at $13.

The menu is not coy about calling vegan protein meat, either. They don’t put quotes around meat or cheese, and they don’t come up with funky names like “chik’n” or “beefy.” It is what it is, and what it is is good.

We snacked on a set of three fried mac bites ($8). Three crisp, thickly-breaded and perfectly-fried spheres the size of ping-pong balls were filled with a rich, creamy portion of mac and spicy vegan cheese made from cashews.

A vegan beans & greens bowl ($12) would have been a complete success even without the grilled vegan chicken on the side. Smoky, tender pinto beans were mixed with a combination of long and slow cooked kale, collard and turnip greens atop a mound of well prepared white rice. Bite-size cubes of vegan chicken were dense and chewy, perhaps not a perfect match for bird meat but flavorful in its own right. Addington said it’s a mix of wheat-gluten seitan with silken tofu seasoned with poultry spices and veggie broth.

A huge chef salad (a $2 upgrade with a sandwich) was very good, prepared with attentive care. The romaine was torn into large, green and crisp pieces, dressed with a rainbow of halved grape tomatoes that were red, yellow, orange and purple, as well as thick cucumber slices, skin on, and long strips of red onion. Bits of vegan ham, turkey, coconut bacon and crisp croutons topped it off. A tub of creamy vegan ranch dressing made it complete.

And then there was that pit beef BBQ sandwich ($12). I’m still marveling over its deliciousness. Built on an excellent burger bun made with brioche, it featured a layer of thin-cut meat, juicy and properly charred with burned bits to contrast with bites of toothsome deliciousness, dripping with a tangy, hot-sweet barbecue sauce and finished with crisp, quick-pickled onions and layer of creamy slaw, Memphis style.

It was amazing, and I couldn’t figure out how they did it, so I asked Addington via Facebook Messenger. “It is seitan,” she said, “wheat gluten with cremini mushrooms processed down to a paste, and lots of spices. After baking and cooling it, we cut it on a traditional deli meat slicer to get it as thin as possible. Then it is seared to order on our flattop grill with our housemade horseradish BBQ sauce.”

So there you have it. I would go back for more of that sandwich in a Memphis minute.