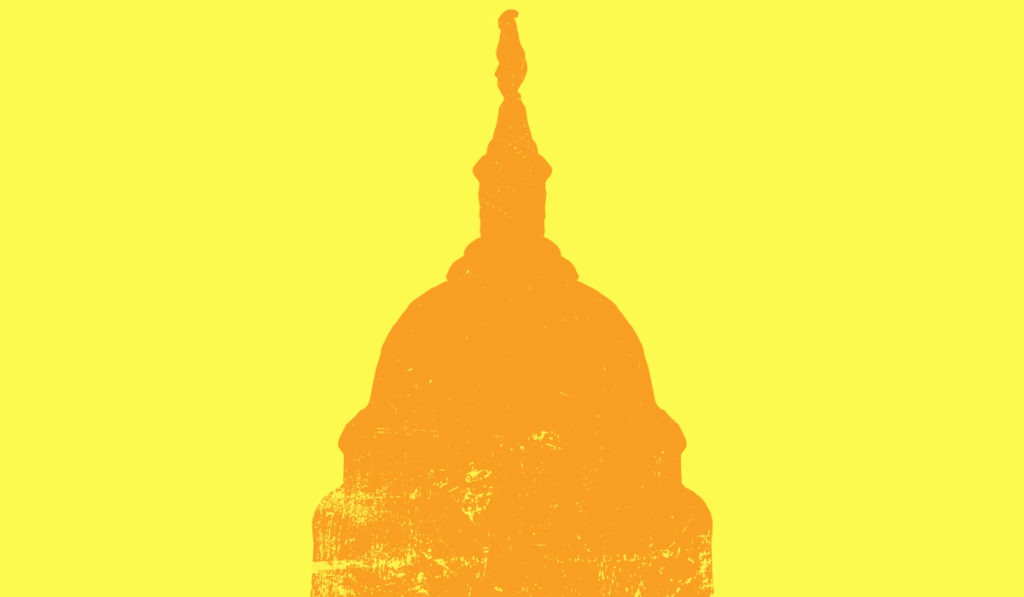 It was during the last civil rights movement that Sam Cooke penned “A Change Is Gonna Come.” And it did. During this year’s racial justice movement and coronavirus pandemic, people have been asking for a change, too. If they’re depending on the state legislature, though, they might have to wait.

“They’ll pass a budget; they’ll limit Beshear’s emergency authority. And beyond that, it’s hard to see that much big that will get done,” said Al Cross, a political columnist and the director of the University of Kentucky’s Institute for Rural Journalism and Community Issues.

It’s not like Kentucky’s Republican “super-duper majority” is likely to pass much in the way of racial justice reform, anyway, (our words).

Because of this anomaly, though, Cross said lawmakers are more likely than usual to stuff the budget with items that would normally have been standalone bills. This strategy is usually implemented to pass laws that have consensus or that are pet projects of legislative leaders.

What Republican legislators do have time for is thwarting Gov. Andy Beshear. While he’s waved his executive order wand to mandate masks and shut down businesses in response to the pandemic, Kentucky Republicans have seethed. And they’ve now pre-filed at least six bills that would limit his orders.

Senate Republicans have other priorities beyond the budget and emergency orders. Cross said an abortion bill that has yet to be filed mandating that doctors provide life-sustaining care to fetuses in botched procedures is likely to pass, because new lawmakers will be eager to prove their anti-abortion stance. But, a priority for Senate President Robert Stivers, R-Manchester — banning no-knock warrants — will be more complicated. State Rep. Attica Scott, D-Louisville, has already introduced her own, likely more sweeping, no-knock ban called Breonna’s Law.

Solo Republicans have pre-filed other coronavirus legislation beyond their leadership’s priorities. But not to help you, silly.

The bills would cater to businesses angered by Beshear’s orders and allow anti-vaxxers to gallivant around the state by making it illegal for colleges and employers to require the coronavirus cure. Cross said it’s hard to say how those bills will do.

“They may have some competition for who can be the most anti-Beshear,” he said. “And that may send them over in the ditch. Overreact, as I said in a recent column. It’ll be up to [House Speaker David] Osborne and Stivers to try to make sure that those measures get proper deliberation.”

Other bills that cover recent events are in question, too: criminal justice reform, voting access and race disparities. We cover them in more depth below.

And, there are still more priorities that have yet to be filed, including pension reform and a liability reform bill to protect businesses from COVID-19 related lawsuits.

There are criminal justice reform bills that have a chance this year and those that don’t. And the main difference is who’s proposing them.

The reform bills pre-filed by Republicans, and therefore more likely to pass, begin with BR 236 by Rep. James Tipton, R-Taylorsville, which would allow Kentuckians with past felony convictions to obtain Kentucky Educational Excellence Scholarships, which are given to high school and GED graduates based on academic metrics to help pay for college. Another bill, BR 9, by Rep. Ed Massey, R-Hebron, would make it more difficult to be charged with felony theft by raising the threshold from $500 to $1,000.

Kentucky Democrats have proposed their own reforms. BR 220 from Rep. Rachel Roberts, D-Newport, and Reps. Tina Bojanowski and Attica Scott of Louisville would criminalize law enforcement officers having sex with a person who is in custody or under arrest.

BR 80, from Rep. Buddy Wheatley, D-Covington, would place limitations on solitary confinement for juveniles in detention — shortening the amount of time they are allowed to remain in confinement to no more than four hours in a 24-hour time period. The bill, if passed, would also require a medical professional to assess the juvenile as soon as possible after they’re placed in solitary, and detention centers would have to start logging details of each instance of such confinement.

BR 462, pre-filed by Sen. Gerald Neal, D-Louisville, says that its purpose is to prevent new criminal justice policies from having unintended consequences on minority communities. It would require assessments for some types of criminal justice legislation regarding how they might impact racial and ethnic communities. Applicable bills, resolutions and amendments would be those that affect pretrial detention, sentencing, probation or parole policies and those that modify crimes or offenses. (Neal has pre-filed another bill, BR 97, that would do something similar for legislation that might have a disparate health impact on minorities.)

BR 336 and BR 448 would not involve restructuring courts or detention centers, but they would prevent crime and abuse victims from being punished financially. The former, by Rep. Roberts, as well as Rep. Joni Jenkins and Rep. Lisa Willner (both Louisville Democrats), would prevent employers from firing or retaliating against employees who are crime victims if they take time off to go to court. The latter, from Rep. Nima Kulkarni, D-Louisville, would prohibit domestic violence victims from being disqualified from unemployment benefits if they can no longer work because of any abuse.

Two Republicans, meanwhile, have proposed bills that would shield those traditionally in power within the criminal justice system from having personal identifying information revealed about them. BR 960 by Sen. Danny Carroll, R-Paducah, would prevent the release of records revealing the addresses of law enforcement officers, judges, prosecutors, corrections officers and more who opt out. BR 985 by Rep. John Blanton, R-Salyersville, would protect judges, prosecutors and police officers from having their names, dates of birth, addresses, email addresses,  phone numbers and other info revealed in open records requests or on the internet by government agencies.

A ban on no-knock warrants is an idea that Sen. Stivers has expressed support for. But the only bill pre-filed so far that would carry out this reform is by Rep. Scott, and all of her co-sponsors are Democrats. BR 22 would require law enforcement officers to knock and announce before executing a search warrant. It would also require officers to wear body cameras while engaging in law enforcement activity, require the agency to release body camera footage to the public if there is a misconduct complaint (and no privacy concerns), expand the scope of permissible lawsuits against state and local governments and require drug and alcohol testing for officers involved in a “deadly incident.”

Rep. Scott has filed several bills to protect Black people against discrimination. One, BR 169, co-sponsored by Rep. Bojanowski and known as the C.R.O.W.N. Act, would add hair texture and protective styles, such as braids, locks and twists, to a list of traits that cannot be used to discriminate against an individual — including within schools. Another pre-filed bill from the two Louisville lawmakers, BR 77, would implement evidence-based implicit bias training for all health care providers involved in pregnancy care. This is similar to a pre-filed bill by Rep. Reginald Thomas, D-Lexington, BR 499, that would require cultural diversity training for suicide assessment, treatment and management training.

The pandemic introduced us to what voting could be like, with expanded absentee voting and early voting, and some legislators would like for casting a ballot to be made more accessible permanently.

Secretary of State Michael Adams has said that he is interested in expanding early voting to a few days before the election but doesn’t want to do the same for absentee ballots. Reps. Roberts and Wheatley, however, are barreling ahead with the pre-filed BR 223 to expand absentee voting to anyone. Currently, you have to be unavailable on election day and unable to cast an in-person absentee ballot at any time in order to be eligible.

Rep. Wheatley also has a more modest proposal with BR 217: He would like to extend the hours of voting in Kentucky from 6 a.m. to 6 p.m. to 6 a.m. to 7 p.m. But, he’s also interested, via BR 371, along with Rep. Roberts in removing straight-party voting as a ballot option in regular elections.

Republicans are responding to the coronavirus pandemic with legislation, although not in the way you may want.

The federal government has no plans to mandate a vaccine, but Kentucky lawmakers are worried that some other entity, the state or an employer for example, could require one. At least two proposed bills would allow Kentuckians to dodge these requirements. BR 301— by Rep. Savannah Maddox, R-Dry Ridge; Rep. Mark Hart, R-Falmouth; Rep. Kevin Bratcher, R-Louisville; Rep. Joseph Fischer, R-Ft. Thomas; Rep. Thomas Huff, R-Shepherdsville; and Rep. Richard White, R-Morehead — would prohibit any “state agency or instrumentality” from requiring a COVID-19 vaccine. Currently, the state government is not allowed to do this anyway in normal situations. But, if there is an epidemic, it does have the authority. BR 418 by Sen. Rick Girdler, R-Somerset, would expand the previous bill to include employers. And, BR 892 by Rep. Hart, would add colleges to the mix.

Two bills retaliate against Gov. Andy Beshear’s executive orders shutting down businesses. One is BR 234, by Rep. Maddox, which would prohibit the denial of some permits for restaurants violating the orders. The other, BR 234, by Rep. Hart would allow businesses to sue the state for damages if they had been negatively affected by Beshear’s actions.

More pre-filed bills would attack Gov. Beshear’s executive orders, forever preventing a governor from using them in the sweeping way he has. There are at least six bills that would allow the General Assembly to block executive orders in a couple of different ways. Most would limit the amount of time the order could last. The most restrictive, BR 130, would limit such an order to 14 days. The longest, BR 73 and BR 41, would shorten it to 30 days. After the order expires, the governor could not file an order extension unless the General Assembly approved one. BR 98 would automatically convene the General Assembly if the governor issued a state of emergency and legislators were not already in session. Then, legislators would have the ability to “consider” any subsequent orders issued.