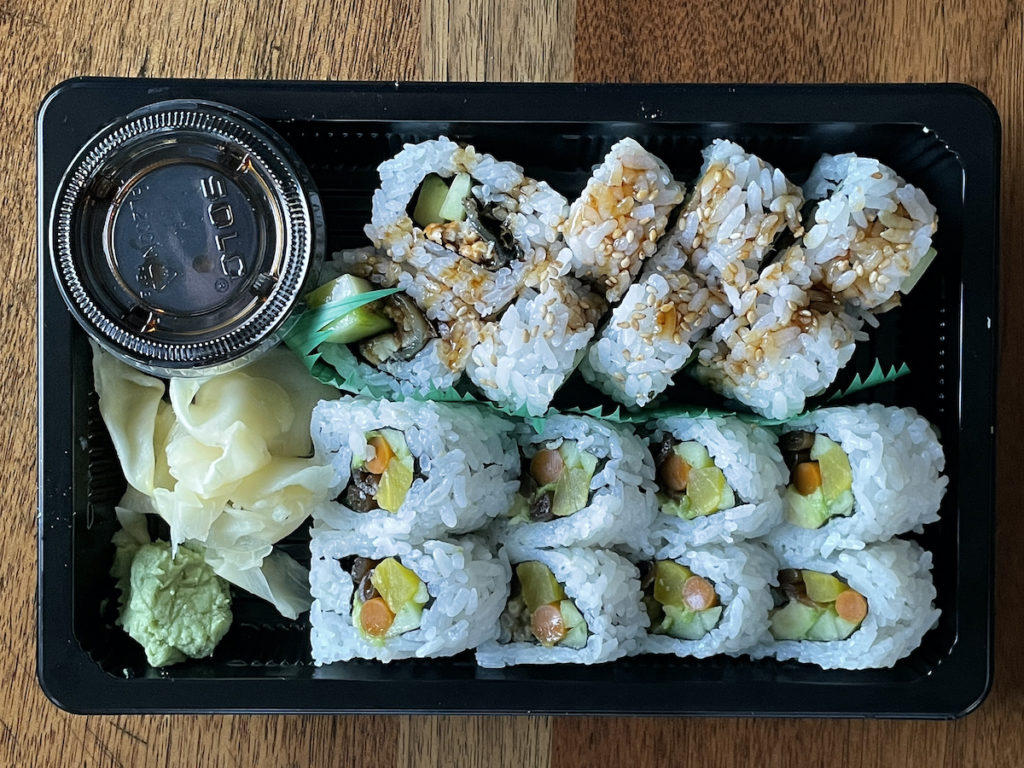 Two sushi rolls at hiko-A-mon: Eel roll at the top and veggie roll beneath, with pickled ginger, wasabi paste, and a tub of soy sauce on the side.

Back when Louisville had its first taste of locally-made sushi, served over a Fourth Street drugstore lunch counter on Thursdays only, the idea of sushi was a bit divisive. A few of us yelled “Yay!” Some responded, “Yuck! Raw fish!”

Times have surely changed. Now that we can get boxes of sushi at the neighborhood grocery or even, if we dare, at a gas station, sushi is no longer strange and exotic. Just about everyone yells “Yay” nowadays, but there’s a gotcha: The most popular boxed sushi is maki, the familiar rice-wrapped sushi rolls, built in a tube and sliced into convenient rounds.

Nigiri sushi, the bite-size treat that features a healthy chunk of raw seafood or fish spread atop a ball of sushi rice with a dab of fiery green wasabi horseradish, wins praise from sushi geeks. So does the even more basic sashimi, which features artfully cut bits of fish laid out on a plate for consumption au naturel. If I just heard a “Yuck” from the peanut gallery, my point is made.

I could be a sushi snob and demand that you join me in a nigiri and sashimi feast today, but let’s save that for another occasion. Rather, let’s talk about quality maki rolls from one of the best Japanese restaurants around town: hiko-A-mon in Westport Village.

One of the first tenants of the renovated East End shopping complex, hiko-A-mon has earned deserved popularity with Kyoto-born Chef Hiko (who goes by only the single name) at the helm. We usually go there to sit down at the sushi bar to watch in wonder as the sushi chefs slice, dice and gently set one delicious and colorful wonder after another on your plate.

That’s a wonderful way to do sushi, but we’re in a pandemic right now, and I’m not ready to sit among strangers doffing our masks to enjoy sushi even with proper social distancing until herd immunity arrives. Not to mention that unlimited sushi can add up in price. That’s an issue, too, during the pandemic economy.

But wait! This is where the roll comes in! A couple of good rolls, a Japanese salad and a colorful dish of oshinko pickles don’t add up to all that much. They’re served cold, so there’s no issue with getting them home. And they’re really, really good to eat.

Suiting action to thought, I pulled up hiko-A-mon’s online menu and put in an order, passing over the many fine entrees ($15-$45) as well as fried items like tempura, on my way to the apps and rolls.

It’s hard for me to think of a better use for iceberg lettuce than a Japanese-restaurant salad. And the refreshing hiko-A-mon salad ($6 regular, $3 small) is a good one. The lettuce was crisp and cold, neatly chopped into bite-size squares. The traditional dressing mix of ginger, garlic, onion and carrot was more textured than smooth, a pleasant variation on the typical creamy sauce.

A bowl of miso soup ($3) was warm and nourishing, an umami-rich broth of white miso and dashi bonito flakes with a few tiny cubes of tofu and strips of dark-green seaweed enjoying a warm bath. A plastic-foam cup provides sufficient insulation to keep the soup hot all the way home.

Moving on to the sushi rolls. We ordered a pair: eel roll ($9) and veggie roll ($7). Both were served in the same attractive takeout box, cut into eight pieces each and neatly arranged with pickled ginger and wasabi paste at one end and a tub of soy sauce on the side.

The eel roll was perfect. This roll is customarily served with a generous ration of sweet, thick “eel sauce” on top, but they complied with my request to keep it light and painted on only just enough to keep it traditional without turning it into dessert. The roll contained thin-cut strips of eel — a dark, oily, unctuous fish — contrasting with crisp, julienned cucumber. It was all tightly wrapped in crisp nori seaweed with tender, sticky sushi rice rolled around it on the outside.

The vegetable roll ($7) was also a treat, assembling strips of crisp cucumber, crunchy carrot and soft, earthy, dark mushrooms to achieve an appealing contrast of flavor and texture within the standard nori-and-rice inside-out roll.

Wrapping it up, an order of oshinko ($4.50), four different Japanese pickles, made a crisp and colorful side dish. The contrasting yellow, green and brownish colors of pickled seaweed, green and yellow peppers, plus gingery mushrooms were a treat for the eyes and palate.

Our bill for a delicious sushi treat came to $34.34, including a 20 percent tip, tax and a $1.49 service charge from the online menu provider.