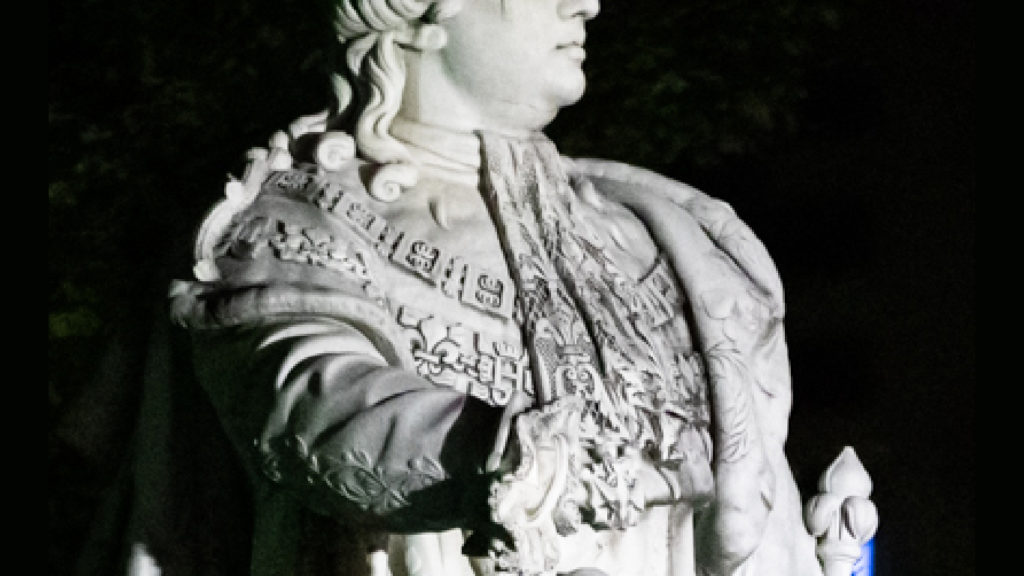 The King Louis XVI statue downtown lost a hand on the first night of protests. | Photo by Kathryn Harrington.

A resolution to repair the King Louis XVI statue and reinstall it as quickly as possible outside of Metro Hall passed 6-4 out of a council committee Tuesday.

The marble depiction of the French ruler for whom Louisville was named was damaged by graffiti and lost a hand during protests over the police killing of Breonna Taylor earlier this year. It was removed on Sept. 3.  The resolution to repair the statue now heads before Metro Council with amendments addressing concerns.

Sponsors of the resolution said that the quick restoration of the statue was important because the city must repair its property that is vandalized.

“Normally, when damage is done, especially when damage like this is done, as a result of the evenings that folks were expressing legitimate frustrations — windows were broken, graffiti was painted, things were burned — typically, when those things happen, you repair that damage, and you try to get back to some sense of community that appreciates and respects one another and the property that belongs to all of the citizens of Louisville,” said Councilman Kevin Kramer, R-District 11, the primary sponsor of the resolution.

Opponents of the resolution said they were concerned about prioritizing replacing the statue without a full assessment of its condition and cost. That assessment will contain a cost estimate, and it might say the statue is not durable enough to be returned outside.

“I think we’re just jumping ahead of things,” said Councilman Bill Hollander, D-District 9. “We’re saying, first of all, we want to restore it no matter what the cost. And two, we want to be at this location, even if it’s not the best location to preserve it in the future.”

In response to some concerns from colleagues, Kramer added two amendments. One stipulated that the mayor’s office would have to present the cost of repairing the statue to the council if it requires city funds to do so. The other amendment altered a sentence in the original resolution that said the mayor should pursue federal coronavirus-related funds, in addition to other third-party funds, before using city money to pay for the repairs. Now, the resolution says only that the mayor should first pursue philanthropic, federal and/or other third-party funds before dipping into municipal coffers.

The council did not address suggestions from some community members that the statue not be replaced at all.

In a recent interview with LEO, Ramona Lindsey, a member of the city’s Commission on Public Art, said the vandalism of the statue is a sign that the public might be divided on it — and that returning the statue to its  prominent location might not be appropriate now.

“I think that public art should have significance to a large scope of the city, that our monuments should reflect the demographics and composition of our city as a whole,” Lindsey said. “And, I’m not sure how this statue does that.”

Her concern about the statue’s popularity was echoed by the full commission in a statement sent to council members. The statement asked that council members consider the resolution in the context of public art guidelines that were developed in the midst of calls to remove the John B. Castleman statue from Cherokee Triangle. The guidelines were created in 2018 to help officials evaluate whether controversial public art in the city collection should be altered, preserved or removed.

Is Louis another Castleman?

Councilman Anthony Piagentini R District 19, a co-sponsor of the resolution, told LEO in a recent interview he does not consider the King Louis statue to be one of the city’s examples of disputed public art, such as the Confederate monument at UofL, which was removed in 2016.

But Lindsey does regard King Louis as a controversial figure. He was beheaded by his own people during the French Revolution, which was partly sparked by the economic divide between France’s commoners and its rich, ruling class. Louisville is named after the monarch because he provided financial support to fight the British during the Revolutionary War. But, this was also one of the reasons King Louis’ people rebelled against him, because it drove the country to the brink of bankruptcy.

The statue was commissioned by King Louis’ daughter in the 1800s as she worked to restore her family’s rule, but it was removed from its place in Montpellier, France’s public square soon after it was installed. The nine-ton, marble statue remained in storage for 136 years until Montpellier became Louisville’s sister city, and the French town gifted the statue to Louisville in 1966.

The Metro Council resolution, sponsored by four Republicans and one Democrat, calls the statue a “historic piece of international art” and says the statue symbolizes the “close relationship” between Louisville and Montpellier.

But, the statue’s history is part of the reason Lindsey thinks it might not belong on public display.

“I think it’s an interesting gift,” she said. “It kind of reminds me of dirty Santa since we’re approaching the holiday season. When you get a dirty Santa gift that someone puts in the bag, but they really don’t want it and they hope somebody will take it?”

The public art report that the arts commission asked the Council to consider comes from the Public Art and Monuments Advisory Committee. It says monuments on their own are not history but are “sanctioned versions of history.”

“They reveal some parts of history and hide others, while imposing on us notions of who we are and where we come from,” the report reads.

The report also contains four criteria that should be considered when the city is making a decision about a “contested” monument, including deciding whether to conserve it. One of the criteria asks whether the piece celebrates “a part of history that a majority of Louisvillians believe is fundamental to who we are and what we value.”

“Monuments should reflect ‘us’ not ‘some of us,’” the report says.

Piagentini told LEO he believes the majority of Louisville citizens would like to see the statue returned. But, Lindsey said she would like for the public to have a say in what they think of the statue before a conversation begins about whether it should be repaired and reinstalled.

Piagentini warned that failing to reinstall the statue will send a harmful message.

“[If] we start making movement as a public entity, as the city, because of illegal activity where does that end?” he said. “That would reduce the stability of the city’s operation so that the public would be left certain of our ability to remain stable through difficult times.”

LEO asked Piagentini about the timing of the resolution, as the city faces issues of racial discord, police wrongdoing and financial strain.

Piagentini said he thinks the city’s problems can be worked on at the same time.

At November’s Government Oversight and Audit Committee public meeting, council members delayed discussion on the King Louis statue in favor of one on Elliott Avenue and the Place Based Investigations squad, which was involved in Breonna Taylor’s death.

As did Hollander, the Commission on Public Art asked the council to wait until a full assessment of the statue’s condition is completed before voting to repair and reinstall it.

“The initial assessment that the public art administrator has received from conservators is that the damage is so significant, not just from recent vandalism, but prior vandalism, that it will be extremely expensive if not nearly impossible to restore,” said Lindsey.

The statue was damaged 20 years ago, said Louisville Public Art Administrator Sarah Lindgren at the commission’s last meeting. And, the statue’s repairs have become vulnerable with the washing the statue has undergone recently.

Piagentini said that the resolution is a statement of intent, not a final action. But, barring a shockingly expensive fix for the statue (something like the cost of rebuilding a building), he doesn’t foresee it being reneged on if passed.

“Yes, this is going to cost us money, yes we need to know how much before we take final action. There’s no question about that,” he said. “But, the cost is the reason why we need to take vandalism more seriously. The cost is not a reason to not replace the statue.”

The statue has also been damaged because marble is not suitable for the outdoors, according to an initial conservation assessment by a Louisville restorer, Falls Art Foundry. The report recommends that the statue stay indoors and away from public access.

Piagentini wants to work around that, perhaps by creating a permanent covering for the statue. The Falls Art assessment does not address whether this would work. Another suggestion is that the city could create a duplicate statue to install on the corner of Sixth and Jefferson streets. That one comes from Steve Wiser, an architect who wrote an op-ed for the Courier Journal about the statue.

Falls Art Foundry was not able to provide a cost estimate for the statue because of the severity of damage, Lindgren said at a commission meeting. She is in the process of consulting other specialists. •