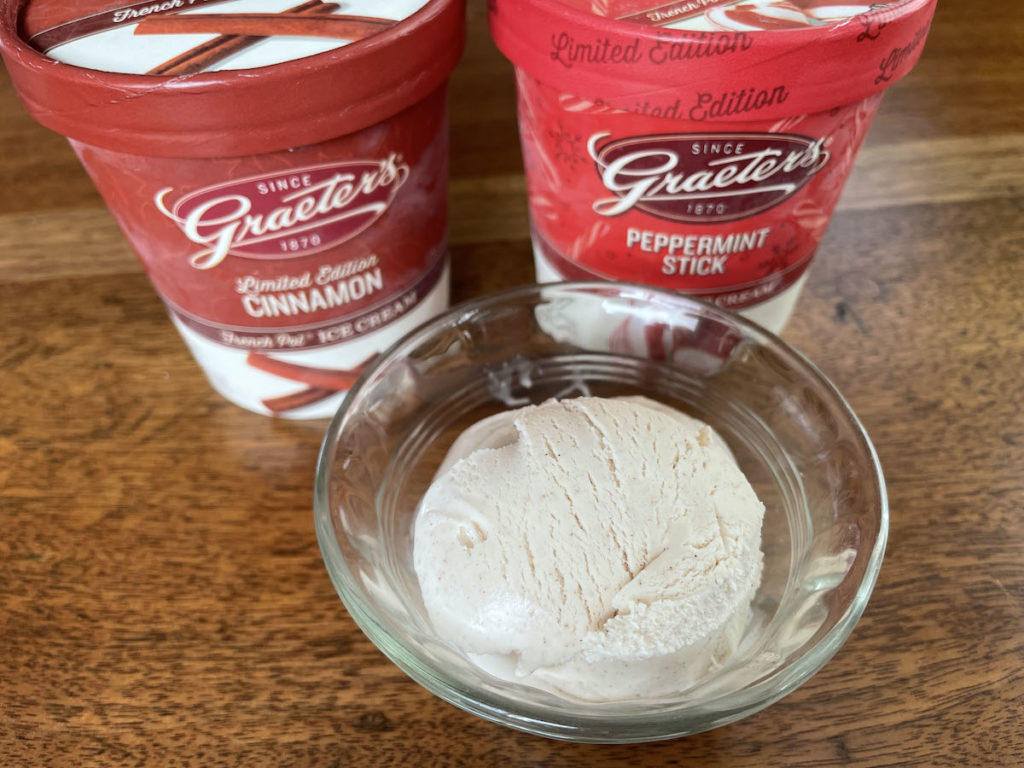 A scoop of Graeter's Cinnamon ice cream and pints of cinnamon and peppermint stick.

Tell me about favorite desserts and sweet treats for the holidays: What have you got? If you celebrated Hanukkah in your household, you’ve enjoyed such deliciousness as hamantaschen, jelly donuts and all manner of fried sweets. Christmas brings a wealth of sugary delights, from gingerbread cookies and Yule log cakes to the ubiquitous fruitcake and whatever the hell sugar plums are.

But wait! Where’s the ice cream?

Yes, knocking back a pint of frozen cream can bring down your core temperature, but inside a warm and cozy house, in front of a fireplace, ice cream can be a festive treat.

We checked in at Comfy Cow, Homemade Ice Cream & Pie Kitchen and Graeter’s this week and found all three offering flavors that work for the holidays, some of them billed as special seasonal flavors.

Graeter’s, for instance, has three seasonal flavors for the holidays: cinnamon, peppermint stick and pumpkin ($5.18 for a pint). Comfy Cow’s Westport Village shop offered us its branded Cinnamon Mon and peppermint stick ($7.50 for a pint) as seasonal treats. And over at Homemade’s St. Matthews shop, they weren’t earmarking seasonal flavors, but we picked up a cup of cinnamon to match the other two, plus a cup of coconut flake just because ($4 for a cup).

Since we ended up with three samples of cinnamon ice cream, it made sense to try them all together. I’m happy to say that they’re all pretty good. I like cinnamon, but I also have my limits and probably wouldn’t want to eat the stuff all year. But right now while it’s seasonal, sure! It’s a better pick for me than pumpkin spice. Cinnamon good. Cinnamon, nutmeg, cloves, allspice and ginger, a little too much.

But I digress: We’re talking about cinnamon ice cream and here were three samples. They were all, well, cinnamony, yet each was distinctly different.

Graeter’s, a beloved Cincinnati brand that reached out to Louisville years ago, boasts of its classy “French pot” cooking method. This involves starting with an egg custard base that imparts a mouth-coating texture that’s different from the usual cream churned with sweeteners and flavorings. It worked for Graeter’s with a pale-tan cinnamon color and a delicate, refined flavor that’s thick, rich and yet subtle. It also doesn’t melt as fast in your dish, an advantage if you’re a slow eater.

Comfy Cow’s Cinnamon Mon flavor was significantly darker in color and boasted a much stronger cinnamon flavor, which might be an advantage for you if you like your cinnamon. This one is right in your face with a spicy, almost pungent cinnamon vibe.

I was a little wary of Homemade’s cinnamon at first because I could see that the freezer container was almost empty, requiring our server to scrape it off the edges in smallish bits. I was dead set on cinnamon, though, and she did a good job, with the unexpected result that the ice cream was full of tiny bits of fat that had frozen on the edges, sort of like delicious cinnamon chips. I don’t know how you could replicate that other than waiting for them to almost finish a container, but it’s worth knowing about. Once they melted, we still had a decent, middle-of-the-road ice cream with a very light color and a balanced, sweet cinnamon flavor about midway between the other two in intensity.

So, three different cinnamon ice creams, three different approaches. I liked them all, each in its own way, so let’s call it a triple dead heat. You may want to make your choice based on the style you prefer.

Before we move on to the two peppermint ice creams, I should probably be candid with you: I’m not really crazy about peppermint in general. I don’t like candy canes, I don’t like peppermint schnapps, I’m not even interested in peppermint flavor in my toothpaste. So I approached these more for the sake of science than love and relied on Mary to backstop my opinions. That said, our two samples were clearly different.

Graeter’s French pot technique paid off in refinement and subtlety again: It was mild, resistant to quick melting, smooth and light. Tiny bits of broken-up peppermint stick studded the ice cream and imparted an intense pink peppermint color and flavor into the surrounding ice cream.

Comfy Cow’s peppermint stick ice cream was a much brighter, bolder, pink, almost neon in contrast with Graeter’s pretty pale pink. The flavor of the Cow’s thick, dense ice cream was bold and bright, too, an intense presence of peppermint.

Since Homemade Ice Cream and Pie Kitchen didn’t have any peppermint this day, we tried a flavor called coconut flake, reasoning that the white treat would resemble snow studded with snowflakes. Okay, I’m lying. It just looked good. It was flaky indeed, with big flakes of coconut meat mixed into a delicious coconut-flavor cream, fresh and pure coconut, not heavy or cloying.

Ice cream for the holidays? Why not?