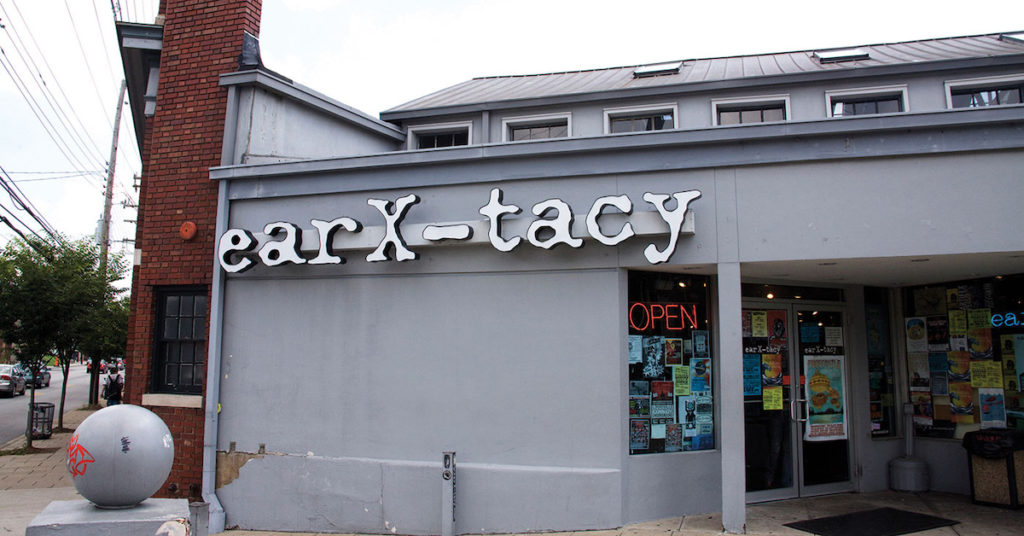 For music lovers in Louisville, it’s almost a citywide shared memory: You carve out some time, head to ear X-tacy in The Highlands and get lost for the next two hours checking out new music on the many listening stations scattered around the store.

The hope was you’d hear that next band or artist that you were about to fall in love with and listen to incessantly, as the thrill of “discovering” that new favorite band is something that cannot be explained, only experienced.

The iconic store opened Aug. 1, 1985, at 4264 Poplar Level Road, moved to a space next door to Great Escape where it did business for three years, then to the 1534 Bardstown Road location that became its long-time home. It ultimately landed in a smaller spot down the street, at Douglass Loop, before closing for good in late 2011. The classic Bardstown Road space then became a Panera restaurant, adding insult to injury. Ear X-tacy’s legacy would spark the 2012 documentary “Brick and Mortar and Love,” and many remain wistful for those days of browsing through albums and CDs and soaking in the quirky atmosphere of the destination music shop.

Founder John Timmons, now a daytime host on WFPK, doesn’t necessarily remember the store the way much of Louisville does, however.

“I get it now,” Timmons told LEO Weekly. “I didn’t see the story like you would until long after it was gone. As an owner, it was a totally different take. Now I can see it was a good store. I couldn’t see that for a very long time.”

Here we are nearly a decade later. Several music stores have been born in ear X-tacy’s wake, while stores such as Better Days Records and Underground Sounds continue on. This is in no small part due to a vinyl revolution that’s been building steam for several years now.

According to a recent report from Business Insider, Americans are spending more on vinyl records than CDs for the first time since the 1980s; the report estimates the Recording Industry Association of America show vinyl sales through the first half of 2020 totaled $232.1 million, nearly double the $129.9 million raked in from CD sales.

And Billboard reported that — boosted by Record Store Day on Aug. 29 — vinyl sales in the week ending Sept. 3 rose to 802,000, a 63% increase over the previous week and second only in history to the Christmas-fueled week ending Dec. 26, 2019, citing numbers from Nielsen Music/MRC Data.

So, the question we set out to answer, at least in theory, was: Would ear X-tacy survive during the modern vinyl revolution? Even in a pandemic?

While Timmons was busy building a business, he didn’t realize he was building a community space that would become socially legendary. After about six months in the original spot, he relocated the store to a slightly larger spot on Bardstown Road, next door to The Great Escape.

As business grew, so did inventory and so did the need to have a store that would be able to welcome more people. Moving to the two-level, 10,000-square-foot building at 1534 Bardstown Road a couple of years later proved huge results. Timmons added video, T-shirts and other swag, quirky and fun novelty products, a record label and more.

In-store performances became more and more frequent, with acts such as Queens of the Stone Age, The Black Keys, Drive-By Truckers, Cage the Elephant and Tenacious D, interspersing with acoustic gigs, album release performances and local bands from Cooler to Tim Krekel.

But as the cost of the lease on the spot went up each year, revenues gradually decreased. Downloading of MP3 files transitioned into services such as iTunes and Amazon selling music downloads, prompting many to skip the in-store experience and download music to their devices. Streaming was on the horizon, people were enjoying music differently, and brick-and-mortar retail felt it in a major way.

What was lost for many was an experience, even if the music was still available.

Lisa Foster, co-owner of Guestroom Records in Clifton, grew up in Campbellsville, Kentucky, making frequent trips to Louisville during her high school years with ear X-tacy a frequent focal point. When she went to college and later graduate school, trips home to visit family usually included a side trip to Louisville. It was a lifestyle thing, she said.

Matt Anthony, owner of Matt Anthony’s Record Shop, was a long-time ear X-tacy employee, giving him a different perspective. Asked his best memory of the place where he worked and socialized, he paused and said, “The lifetime friends I made at that shop. Working with the best of Louisville musicians, just hanging out. Working the counter with an incredible guitarist [Jason Noble of Rodan and other bands]. Black Keys playing for 20 people, and you’re right there. The White Stripes coming in, shopping, ringing them up. Hanging out with Jack Black.”

Brett Ralph, a musician and owner of Surface Noise, located at 600 Baxter Ave., was one of the early adopters of businesses like ear X-tacy, likening it to other long lost Highlands businesses like Twice Told and Hawley-Cooke Booksellers.

He loved ear X-tacy for the same reasons most of those who still mourn it loved it: for the experience of discovering new music. That’s the business he’s in now. He started out in vinyl sales renting a booth at the early versions of The Flea Off Market; he saw the vinyl trend growing around him.

But he pointed out that a key difference between his store or, say, Matt Anthony’s, which is on the other corner on Baxter at Payne Street, and ear X-tacy, is that the latter had grown into a huge, one-stop shop in its heyday, whereas his and other smaller stores are more focused on specific audiences.

For example, ear X-tacy was certainly selling a lot of indie punk records and CDs, but a lot of its bread was coming in the door by way of sales of Britney Spears and Limp Bizkit CDs. As Anthony put it, “We sold hundreds of those so we could sell one Gang of Four record, one Nina Simone CD.”

Better Days relied on sales of used music, with a lot of blues and jazz, while Underground Sounds took a deep dive into punk and underground (thus the name) to attract a specific audience. Modern Louisville record stores are doing the same thing.

For Ralph of Surface Noise, it’s hard-to-find used vinyl and classic vinyl, as well as a unique environment. The store also includes an evergreen art installation, in a space that Ralph said was curated to feel “like a cross between a museum and a living room.”

For Anthony, it’s about getting the right music to the right people, skipping selling modern pop hits in favor of classics: “The stuff that really matters: Marvin Gaye, ‘What’s Going On?’, Etta James’ ‘At Last.’ Those were made in the ’60s, and I still sell them every week.”

And there’s the rub. If ear X-tacy was the ultimate one-stop shop, it was also far closer to a big box store than most local stores ever get, in Louisville, at least. And big box music stores have been slowly falling by the wayside for a long time.

Jennifer Rubenstein is the director of Louisville Independent Business Alliance, and while she is quick to point out she is no music store expert, she quickly supports the point that today’s record stores look nothing like commercial record stores from the past.

“They’re a little bit more boutique-ish,” she said. “I think we’re going toward right-sizing the venue.”

And while she misses ear X-tacy like many Louisvillians, she pointed out that it was, basically, unfortunate timing to have a store like Timmons’ as CD sales were falling and downloads, and later streaming, were becoming the new norm: “I feel almost it was like the cross-point of a graph, you know?”

Guestroom’s Foster concurred, saying, “If it were alive in same market I would think it would absolutely be doing well, but operating at that level seems like it would be difficult. I’m not sure you would see ear X-tacy the exact same way that it was.”

Anthony pointed out that shops like his have an added point of sale — online — that ear X-tacy didn’t have and probably couldn’t have effectively managed. Given ear X-tacy’s massive inventory, it would have been difficult to simultaneously do in-store and online sales. When he gets a great new record in, he has it simultaneously for sale in multiple places, driving more and quicker sales while minimizing the overhead.

But the legacy of ear X-tacy isn’t lost — it just may exist in many different, more manageable, forms today in other, smaller stores.

“It created a void that a bunch of us were able to fill,” Ralph said of ear X-tacy’s demise. “I certainly miss ear X-tacy and what they offered to those of us who loved records but I feel like the record culture in Louisville is healthy right now.” 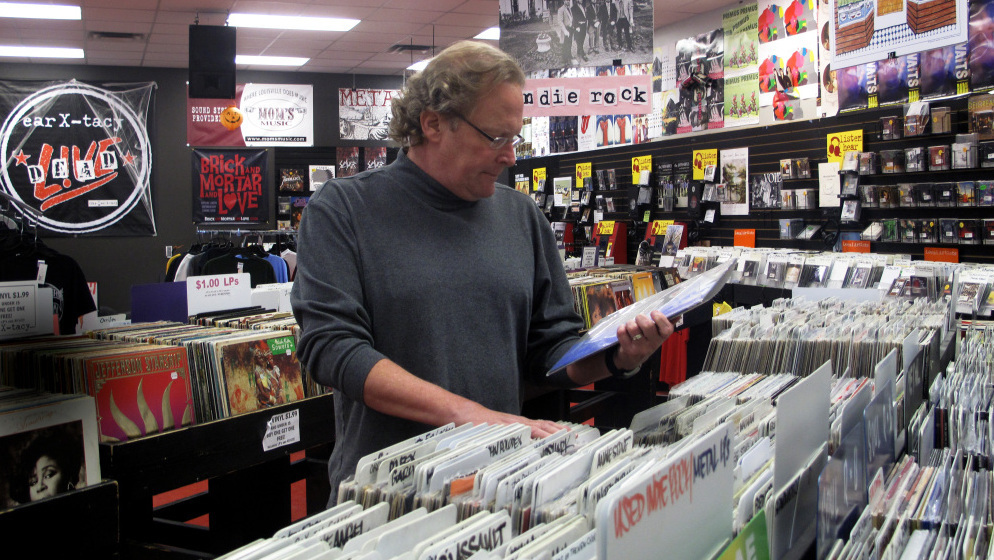 Timmons browsing the racks of his now-closed business.

The answer is “No.” And Timmons doesn’t even need time to think about it. And he’s amazed that people still, nearly a decade later, ask him if he’ll ever reopen ear X-tacy.

“Sometimes it’s a polite no,” he said. “Sometimes it’s a hell no. I wouldn’t be passionate about it at this point. The store could never be as good as it was — so hang on to those memories.”

And his more thoughtful response to such a question is, why not support the indie record stores that are in business now and help make sure they don’t have to close? Right now, the market is working at least somewhat in their favor.

And asked if ear X-tacy would survive in today’s economy and culture, Timmons isn’t sure.

“That’s an interesting question,” he said. “I’m not sure what the market looks like these days. I don’t know how ear X-tacy would do at this point. I don’t think it could be as large a store. I feel fortunate that it was able to hang on as long as it did in Louisville.” •