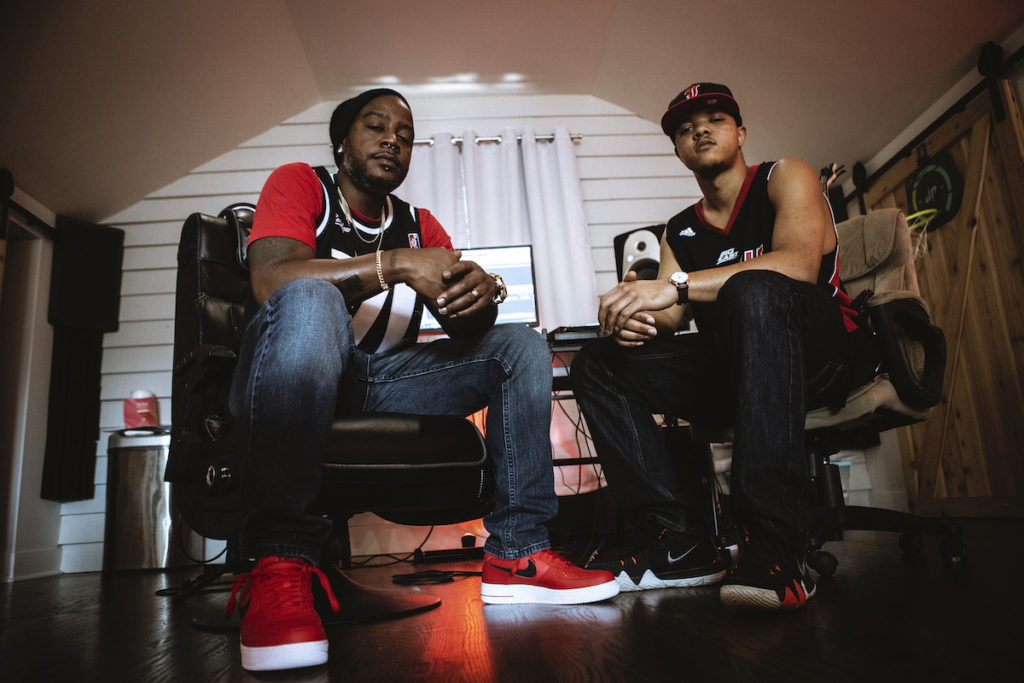 Romell Weaver (left) and Dom B.

Rmllw2llz’s new record started taking shape in a van somewhere between Louisville and Columbus, Ohio. Rmllw2llz, aka hip-hop artist Romell Weaver, and Dom B were out on tour, in between cities, and were ranking the albums that are the most important and influential to them and which ones they would remake if they had the chance. Weaver mentioned Kanye West’s 808s & Heartbreak, an introspective, stylistic record that rearranged a genre back in 2008. As they were talking, Weaver expressed interest in achieving a sound and tone similar to the chilly landscape of 808s. He outlined his idea for an unrecorded song for Dom B, a producer and rapper, who started building and sketching out the production for the track right there in the van, on a drum machine that was plugged into the car lighter port. That ended up being the start of “A New Safe,” the intro to the new Rmllw2llz EP, Concerto No.9 Movement II.V, which will be released on Thursday, Nov. 5.

“We got to Columbus, and he showed me the beat, and I was like, ‘Shit dude, you made this in the car!?’” Weaver told LEO.

“Movement II was me opening up, Movement II.V is me pushing the throttle a little bit more,” Weaver said. “I’m just being a little bit more open, personally, versus it all being socially conscious. It’s just me telling people how I feel. That it’s not always a sunny day.”

The five songs on the Movement II.V show a spectrum of emotions — there are songs in which he’s down and distressed, and there are others where he’s happy and counting his blessings. It’s very 2020 in that way — it’s hard not to be at least a little bit disgruntled this year, but, in some ways, it’s made us appreciate the people who are important in our lives. For instance, “Really Cool Love Song” is a breezy, sweet tribute to his wife, while “Fa Keeps” is rooted in the realities of a cold world.

“It’s a lot of gratitude with a little bit of attitude,” Weaver said.

Even though politics aren’t front and center in his music anymore, he still manages to weave in a few quick shots. On the song “My God,” during a story about a sleepless, thoughts-going-crazy sort of night, Weaver throws a jab at the president: “I feel like living is as unforgiving as Donald Trump / I ain’t as privileged plus I ain’t as dumb / So I say fuck it til the money comes / Until my cup runneth over and fuckin’ stains the rug.”

“I don’t know how to not be somewhat politically conscious or aware in my music,” Weaver said. “I just don’t want it to be all that anymore.”

Before the pandemic, Weaver was starting to tour more, having some success in other cities, but he said it’s hard for small artists who have success on the road and then come back to limited opportunities at home, especially in a year when live music has been almost at a standstill. But, he’s been trying to directly fight that for himself and others through his label, Kr8vn8vs Records, which has recently released music from Church Friends, Trap King Kai, Rob Lee and others.

“Every indie artist, in their city, at home, has felt this,” Weaver said. “At the beginning of their career, they feel… I don’t know, still not being taken seriously.

“But, in the same breath, I have the label, and being able to promote other artists and other things, has kept my mind on things moving forward for all of us, so I just got to keep my head down and keep working,” he continued.

For the past half decade, Weaver has been extremely active in the local music scene, not only through his music and his label but also with his home recording studio, his collaborative projects such as his duo Barrel & Biscuit with Kendall Elijah Dynamite and several other creative endeavors. Business-wise and creatively, his goals have stayed pretty consistent, with a keep-moving-forward mindset that always explores new paths. But, one thing that’s changed over the years is the way he writes songs, which now is a more direct and streamlined process.