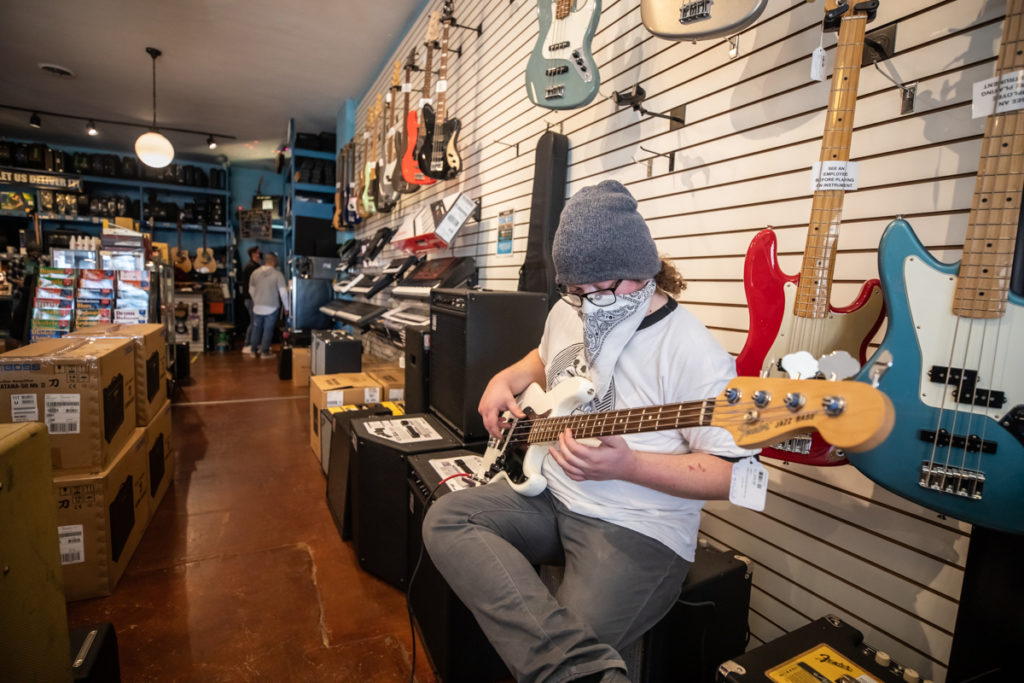 The pandemic has caused ups and downs for sales at the Doo Wop Shop, which rents and sells instruments, PA systems and other concert and event equipment. While in-store customer traffic went from nonexistent during the shutdown in the spring to currently extremely light, certain aspects of the business have thrived. For example, when everyone was staying home as the first wave of the virus circulated, people were bored. Learning to play music or picking up that old instrument became popular.

“At first, we actually had a strong bit of sales in beginner instruments,” said John Metcalf, manager of the Doo Wop Shop. “We sent the lights out of your $100 to $200 guitars, your keyboards, your cheap, beginner-level stuff. We had record numbers of guitar restrings every day because people were getting that guitar out of the closet that they haven’t played in 10 years, and they had some time to do it. As adults, often we say, ‘Well, if I still had the time to,’ and everybody did.”

That lasted only so long.

Now, with a drop in large orders of rental equipment, the Doo Wop Shop’s challenge has become to get customers into the store in a safe way. It has installed safety measures, including hand sanitization rules for people touching instruments and how rental gear is cleaned upon return.

“We had to do some serious homework before we unlocked the doors and quarantine kind of stopped and you could have people in,” Metcalf said. “One of our biggest issues was, how do we sanitize if someone wants to play a guitar? Who buys a guitar before they’ve played it?”

All of the music instrument shops that LEO spoke with echoed the sentiment that, throughout the pandemic, business has been an unpredictable mixture of high and low, with repairs and online shopping being up, and in-store foot traffic being down. Like many small businesses, music stores generally had to furlough some employees. And, most significantly, they’ve been attempting to adapt to a fluid situation that’s significantly changed people’s shopping habits.

Between the shutdown and  the holidays

Jerry Hill, owner of J&J Old Louisville Music Shop, said that late March and the beginning of the spring were tough, but when the federal government cut stimulus checks, he saw an increase in business.

“When the shutdown first happened, boy, that was scary. We were able to maintain doing curbside, but no one was doing any of that,” Hill said. “It really wasn’t until people got their stimulus checks that we started getting repairs come in, and people were buying strings and stuff. Everyone got a breath of fresh air, and had a little more confidence to do those things.”

Like the other shops, J&J has seen a drastic decrease with in-store browsing, but Hill said he’s been using social media to push new and popular items. And Hill hopes that the upcoming holiday season means that people searching for gifts for musicians will help the business survive through the winter.

When the pandemic started, Guitar Emporium furloughed all of its employees except Eric Whorton, who continued to do business via online sales for the store. Finding buyers hasn’t been a problem, since the Guitar Emporium has long done business all over the world, but Whorton said getting new inventory has been hard.

“We’re shipping stuff all over the world every day, and we’ve been doing that since the late ’70s,” Whorton said. “The difficult things were getting products from manufacturers, because manufacturers closed, and many products, the things that we are a dealer for, small accessories and stuff, that aren’t made in America, they come from China or wherever, a lot of that stuff gets tied up in customs and ports. So, it makes it hard to replace things once you’ve sold them.”

Currently, the Guitar Emporium allows only five people in at a time, which is much different from how the store operated pre-pandemic. Instrument shops, like a lot of other small specialty businesses, were often used as a gathering place for like-minded people and a cultural nerve center for some musicians. Whorton said the social aspect of the shop is missed, but it’s become more important to give the most in-store time to people who have the intention to purchase something.

“It’s a social hangout, which we love, and we understand, and it’s just that kind of a store,” Wharton said. “There are other businesses that are like that too — comic book stores, barbershops, places like that. However, you can’t pay the bills with bullshitting.”

Although the Guitar Emporium has had enough business to sustain itself, Wharton said, the store has only been able to bring back one of the four people they furloughed last spring. It’s something that he worries about — not just for the Guitar Emporium, but also other small businesses that are struggling.

“I wonder, in general, will all of these small businesses be able to employ their full amount of former employees again — restaurants, small merchandise stores like this,” Whorton said.