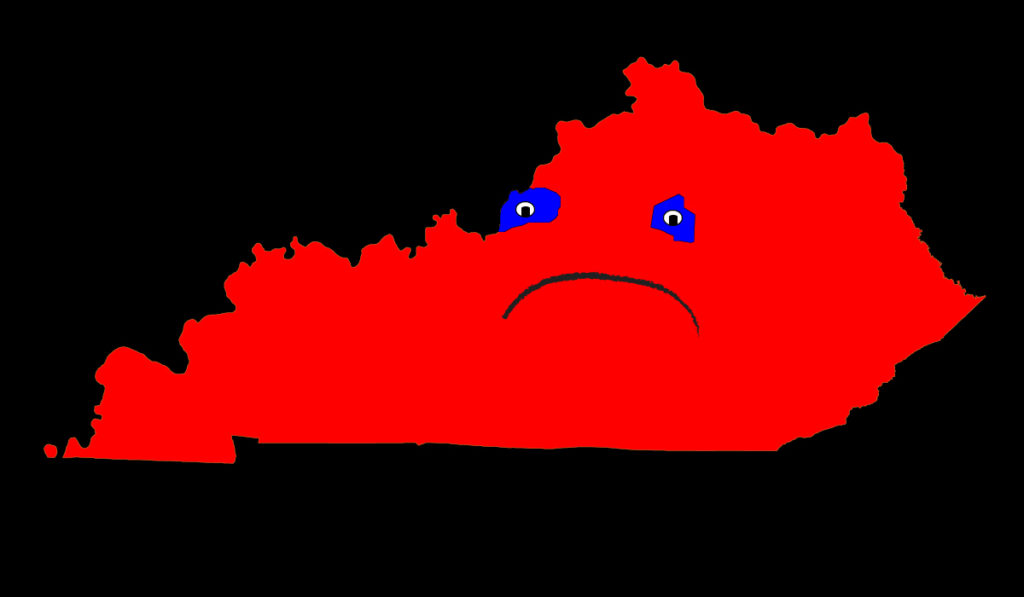 State Democrats got thumped. It was a “bloodbath,” a “whoopin’” and a “blowout,” according to political journalists and observers.

The party that once dominated Kentucky lost 13 seats in the state House and two in the Senate — further cementing state Republicans’ supermajority in the chambers. And, to possibly no one’s surprise, Marine and mom Amy McGrath caved to Senate Majority Leader Mitch McConnell — as did all Democrats who ran for Congress in Kentucky this year, save for U.S. Rep. John Yarmuth, LEO’s founder and longtime congressman in Louisville.

Kentucky Democrats LEO interviewed mostly agree that Donald Trump drove Kentucky Republicans’ success. (Just as in 2016, he carried the state and flipped Kentucky assembly seats in the process.) And, everyone we spoke to conceded that the state’s Democrats must not be communicating their message effectively across the state. But, they varied on how much of a shake-up the party needs. Some Dems suggested another round of post-election reflection. Others had a new proposal: Disband the party completely and invest in a grassroots strategy and candidates.

“I just think that we’ve heard that over and over again that Democrats — whatever hackneyed metaphor you want to use or expression — need to look in the mirror, do some soul searching,” said Chris Kolb, a Jefferson County Public Schools board member who ran for Metro Council as a Democrat in 2016. “I mean we’ve heard that every election cycle I can remember, and it just hasn’t happened.”

State House Minority Floor Leader Joni Jenkins, D-Shively, said there’s no need to throw the whole thing out — especially with party reorganization coming up. New members will be elected to the Kentucky Democratic Party’s State Central Executive Committee, and the chair and vice chair of the KDP, Ben Self and Cassie Chambers Armstrong have said that they are not returning to their positions.

“It’s a good opportunity to evaluate what worked and what didn’t work,” Jenkins said. “I am looking forward. And, I don’t really, have never really participated in pointing fingers; let’s just find solutions.”

There is an outline of a platform on its website: It mentions supporting “quality health care,” high wages, a strong public education system, financial stability for retirees, the right to unionize and infrastructure investment, such as reliable internet in the Appalachian region. The Kentucky lawmakers we spoke to all said health care, public education, and high wages along with access to a clean environment are issues important to them. But, they don’t think that’s being communicated to the public.

Jenkins said that the message was overrun by Republicans this election who wanted to portray Kentucky Democrats as being for defunding the police, a characterization she says is not accurate for most legislators in the House. “Reimagining” policing and dismantling systemic racism, sure. But not defunding.

“I think Kentucky Democrats tend to be on the more moderate, conservative side of Democrat,” Jenkins said. “And perhaps we need to come up with a strategy for when the other side is nationalizing these races.”

Al Cross, a longtime Kentucky political reporter and the director for UK’s Institute for Rural Journalism and Community Issues, said it’s hard to think of anything that will help Kentucky Democrats regain their power in the short-term — even with Trump no longer at the top of the ticket.

“There’s been a steady trend toward Republicanism, driven mainly by social issues,” he said. “Starting with civil rights and going to abortion and the Republican Party’s embrace of that — you know, the Republicans didn’t embrace it right away. And then it moves on to gay rights and gun issues and so on. The Republican Party has identified itself with the cultural and social values of the majority of Kentucky’s electorate.”

But, Democrats could do something by coming up with “bumper sticker” ways to describe what they stand for.

“Unless you’re able to communicate your philosophy and your beliefs in a succinct way, you’re not going to reach a certain portion of the electorate,” he said.

Cross doesn’t have much faith in Kentucky Democrats succeeding partly because it is now an urban party, he said. In the election, it lost its two representatives in Western Kentucky, leaving most of the state outside of the major cities represented by Republicans. Jenkins stressed the importance of closing the urban-rural divide in Kentucky and focusing on issues that people in the cities and people in the country agree on. It’s a strategy that Kolb and state Rep. Attica Scott, D-Louisville, believe in, too.

Scott said she has traveled to “every corner” of Kentucky to speak. And, while she visits, she tries to find similarities between what she wants and what people in the more rural areas want.

“And I say the same thing everywhere I go, because I’m a Black woman everywhere I go,” Scott said. “I say, if you care, if you don’t believe that I or my daughter have the right to make our own reproductive health decisions, then make sure that my daughter is paid a living wage. So that, should she get pregnant, she could take care of her child. If you’re concerned about socialism — which I would actually argue more people, if they really dig into what socialism is, actually agree with it more than disagree but we’ve allowed it to become a divisive term — then support public education and make sure public education is fully funded. Address the needs of people. If you care about your neighbors, let’s do the work of making sure that Martin County has clean bathing water and drinking water. Those are issues that across the Commonwealth of Kentucky, we should be concerned about.”

It’s a message reminiscent of “from the hood to the holler,” state Rep. Charles Booker’s informal campaign slogan when he was running against McGrath in the Democratic primary for McConnell’s seat. He wanted to unite Kentuckians across the state by focusing on the issues that they had in common.

Scott said she’s been talking to KDP staff about a listening session tour across the state for about a year. It has not materialized.

Kolb’s solution to the urban-rural divide is to stop focusing on maintaining a party and fully back progressive Democrats like Booker and Scott to build “a truly grassroots organization.”

Scott was elected to the statehouse in 2016 after succeeding in her primary against a longtime incumbent. The win was historic. With it, Scott became the first Black, female legislator to serve in the General Assembly in almost 20 years. Scott doesn’t remember this being acknowledged publicly by the KDP, and it has set the tone for her time in office. The KDP and influential members do not help candidates enough financially nor with free promotion on social media, Scott said.

This lack of support, according to Scott, is partly why Democrats lost so badly in Kentucky this election.

In an interview after this article was first published, KDP Vice Chair Cassie Chambers Armstrong said that the KDP has made progress on supporting Black leadership in the party and Black candidates, but there is still “a ways to go.” (She was not vice chair when Scott was elected.)

“We have Col. Pamela Stevenson, she’s going to be our second Black elected woman in the statehouse,” Chambers Armstrong said. “And, you know, we did have some really great Black candidates on the ballot this year. And, Democrats are having conversations about how we elevate Black leaders in our community, and I think those conversations are a good things to be having. And of course, those conversations need to be turned into action.”

When questioned about disbanding, Chambers Armstrong said that during reorganization, the party “totally rebuilds itself,” and this year, KDP has been reaching out to Black and brown communities, as well as LGBTQ+ Democrats to help bring new leadership in.

“I think it’s good to have new leaders and new voices and new ideas at the table,” she said. “And I think figuring out how we build a grassroots coalition all over the state is the big question facing our party. And I think it will be good to have a lot of new voices engaged in that.”

Gov. Andy Beshear is ultimately tasked with nominating the next chair and vice chair