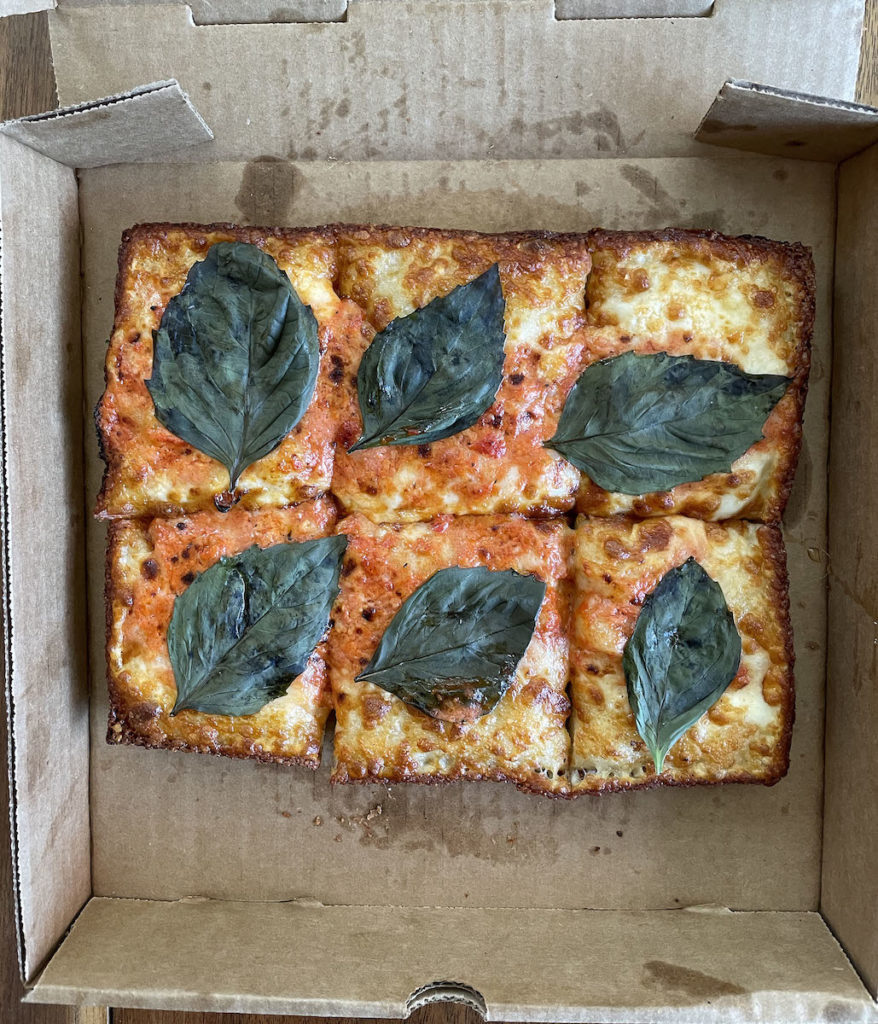 Pay attention, now, because what I’m about to tell you might not make sense if you hear it with only half an ear: A popular Brooklyn restaurant that features Detroit-style pizza has opened in Louisville.

Yes, that’s right: Say hello to Emmy Squared, new in NuLu, where you can get fine square pizzas in the fashion of Detroit, plus worthy burgers and a lot more goodies that you won’t find in your usual pizza joint.

Starting from its base in gentrifying Williamsburg, Brooklyn, in 2016, Emmy Squared is going national, with two more shops in Gotham plus Philly, Washington D.C. and most recently, Nashville, Tennessee and Louisville.

But we’re here to talk about pizza, and Emmy Squared makes a good one. The menu offers a broad selection of pizzas and quite a bit more. It starts with seven appetizer plates that include such Italian restaurant standards as cheesy garlic sticks ($8) and eggplant parm ($15), but goes on to add five variations on waffle fries (from $8 for plain fries to $13 for double chopped cheese topped with grass-fed beef, smoky queso and more).

Someday, I’m coming back for that Le Big Matt, but we were here for the pizza, and it did not disappoint. Nine red-sauced pizzas and eight white pies range in price from $13 (for a classic cheese-and-tomato-sauce model) to $19 (for a red-sauce pizza topped with Nashville hot chicken). You can also get creative with 16 added toppings, $2 for most veggie options, $3 for meats and $5 for creamy Italian burrata cheese.

I ordered online and was given only the option of an immediate (20 to 35 minute) pickup; but that didn’t matter since I was hungry for pizza and ready to dine. The menu also didn’t mention curbside pickup, but in fact you can call in when you arrive to have your order brought out. I didn’t bother and found my order waiting with my name on it on a large black shelf just inside.

A roasted cauliflower app ($10) sounded healthy and tasted delicious. Enough florets for two to share had been steamed until just tender but still showing an al dente bite; they gained an Indian vibe with enough turmeric to color them bright yellow plus a good dose of fiery chili flakes. Puffy golden raisins and toasted pine nuts added flavor surprises, with a squirt of lemon to bring it all together.

The kale Italian salad ($11) was a real winner. It did require some assembly, but that’s a good thing as you can mix it up fresh. Whole leaves of baby lacinato (“dinosaur”) kale and red Russian kale, crisp and dry, were nestled in a compostable cardboard box with other bits of deliciousness to mix in: chopped red peppadew peppers, halved green olives and quartered marinated halved artichoke hearts rubbed with hot paprika. One tub contained generous portions of pine nuts, and a second a delicious basil, Parmesan and olive oil vinaigrette. Once assembled, the interplay of flavors and textures made clear that real thought had gone into creating this salad. Two thumbs up!

But wait! I need more thumbs to hail the pizza. No, it’s not the classic Neapolitan or New York City style that I love in my heart, but it’s a mighty fine alternative, fashioned with quality King Arthur organic flour and made in that Motor City mode, fired in buttered rectangular pans so the crust turns extra crisp and buttery while its interior remains biscuity light and fluffy. It’s not a deep-dish pie but comes out about 3/4-inch thick.

Triggered by memories of the iconic penne with vodka sauce at beloved Italian-American restaurants in outer borough-New York and NYC expat eateries in South Florida, I went straight to Emmy Squared’s pizza with vodka sauce ($13). Contrary to its name, there’s nothing particularly boozy about vodka sauce: It’s a succulent blend of spicy tomato sauce, cream and small portions of red pepper flakes and vodka that seems to brighten the flavors.

A rectangular pie cut into four 4-by-4-inch squares filled a pizza box. A cousin to the classic margherita pie, it was topped with a thin layer of umami-rich and gently spicy vodka sauce; melted, earthy Pecorino cheese and a large fresh basil leaf on each square. The flavors worked together beautifully with the medium-thick, buttery crust and it was even better reheated in the toaster oven for lunch the next day.