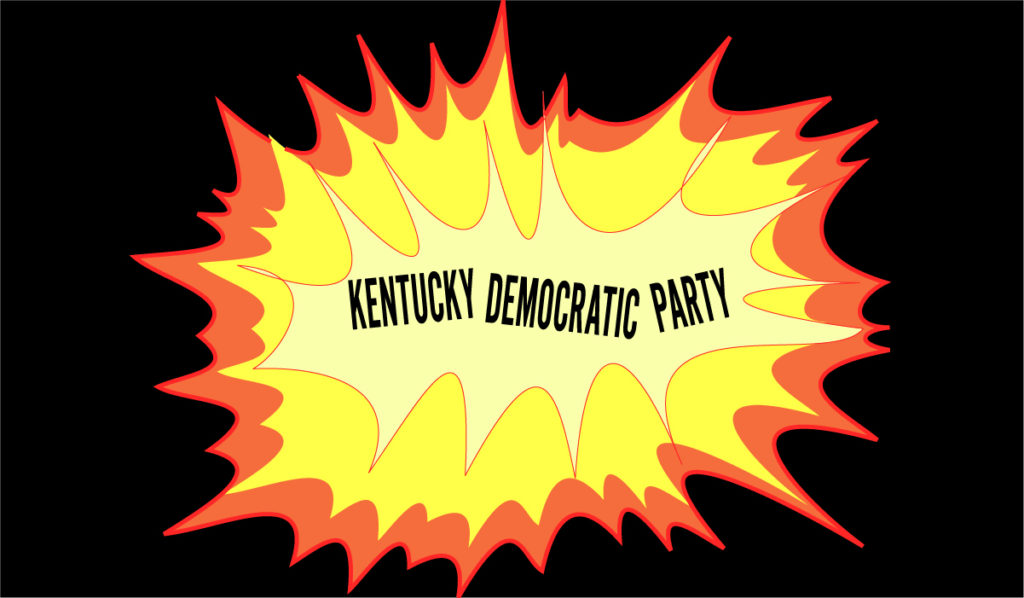 After the annihilation of Kentucky Democrats in last week’s election, we will inevitably hear that the state party has some “soul searching” to do. There’s only one problem: You can’t engage in soul searching if there’s no soul to search. No one has any idea what Democrats stand for. Democrats don’t seem to be fighting for anything in particular. Democrats offer no vision of a better Kentucky. But according to the Democrats, it’s always the voters who fail them as opposed to the other way around.

An organization this ineffectual and obtuse cannot be salvaged. The Kentucky Democratic Party should simply disband, and anyone who cares about our state should line up to give their money and volunteer time to state Rep. Attica Scott, state Rep. Charles Booker and anyone they invite to work with them to build a truly grassroots organization. Wealthy Democrats should write them blank checks with no strings attached.

Some may see this as overly idealistic, but in reality it’s the most practical strategy. Don’t buy it? Then please explain how Booker came within a few points of McGrath despite being outspent almost 10 to 1. Please explain how a socialist almost won the 2016 Kentucky presidential primary. Please explain how anyone could do worse than losing three-fourths of the state House and state Senate, being demolished in five of six statewide races in 2019 and only winning the governor’s office by 0.37% because Matt Bevin was loathed within his own party, insulted teachers and 2% of voters chose the Libertarian candidate.

Scott and Booker have proven that there is a strong appetite for working-class solidarity. “From the hood to the holler,” as Booker’s mantra goes. While Democrats chase the mythical political center, support for allegedly leftist policies is strong across party lines. A recent Fox News analysis of voters revealed that 72% support changing to a government-run healthcare plan, 72% believe undocumented immigrants should have a pathway to citizenship, 71% believe abortion rights established under Roe v. Wade should remain and 78% believe racism is a serious problem.

While Florida’s electoral votes went to Trump, voters there approved a $15 minimum wage. (Remember when Louisville’s Democratic mayor said $10.10 was too high?) As of Tuesday, 15 states have legalized recreational marijuana. This includes South Dakota, where Republicans control every elected office and Trump won by 30 points.  Moreover, throughout the Democratic primary, voters consistently held the most positive view of Bernie Sanders compared to other candidates, and Sanders is still the nation’s most popular senator. Sanders even went into the lion’s den of a Fox News town hall and won over the audience with his “far-left” positions.

What should really scare the hell out of Democrats though is that Trump just won the highest percentage of non-white votes of any Republican presidential candidate since 1960. Despite being the most openly racist president since the Reconstruction era, Trump actually improved his performance among non-whites compared to 2016. It seems a safe bet that most of these voters were registering their suspicion or contempt of Joe Biden rather than approval for Trump. Maybe it wasn’t the best idea for the Democratic establishment to rescue Biden’s primary campaign off the garbage heap to nominate someone who worked with segregationists to lock up millions of African Americans, who “led the charge” against school integration and who stated that Latinos were not a part of his path to victory.

Despite Trump’s long history of unrepentant misogyny, Biden also lost ground among women of all races. Perhaps many women would have preferred at least one candidate not be accused of serial sexual harassment and assault.

Solely blaming racism for the appeal of extremists like Donald Trump is a lazy position Democrats use to justify their failed strategies. Both nationally and in Kentucky, the Democratic Party has proven unwilling and incapable of articulating a vision in which ordinary people can find reason to hope and cause to fight. People who vote Republican know very well that the politicians they support are little more than tools the corporate elite use to consolidate their wealth and power. But at least Republicans don’t pretend to be something they’re not. Democrats, on the other hand, seem fundamentally disingenuous, resembling those the Bible speaks of as lukewarm souls of whom God says, “I will spit you out of my mouth.”

The only realistic path forward for the left must begin with embracing the types of universal government programs established by Franklin Delano Roosevelt in the New Deal. Without providing concrete help for the millions currently suffering and dying due to hunger, homelessness, racism, poverty and a lack of health care, our society will likely fall prey to violent extremism. While it will be Republicans that light the match, it’ll be Democrats who will have stacked the wood.

Chris Kolb, vice-chair of the Jefferson County Board of Education, has been elected to his second term. He is on Twitter @cmkolb and can be reached at [email protected]