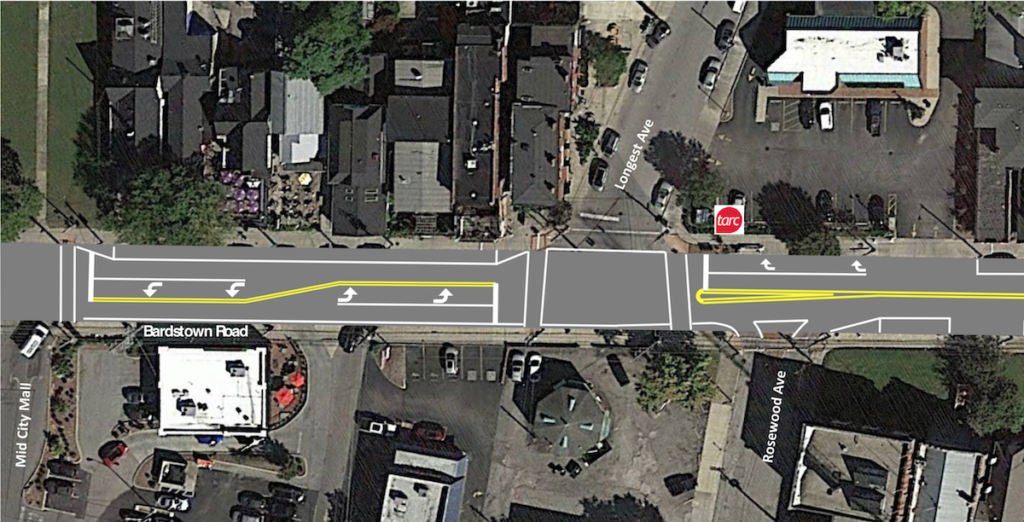 On Nov. 4 and 5, construction crews will convert a section of Bardstown Road through The Highlands into one lane both directions — the start of a plan that outgoing Councilman Brandon Coan hopes will turn it from a commuter highway into neighborhood street.

After Thursday, Bardstown Road from Eastern Parkway to Highland Avenue will no longer open up to four lanes during peak travel times. Instead, the on-again-off-again parking lanes will become permanent, with turn lanes at most signalized intersections and spots for TARC buses to pull off.

Reaction to the change on the private Highlands Neighborhood Facebook group was mixed, with some residents saying the same as Coan and cheering its potential to slow traffic and promote small businesses. But some of the same people also worried about increased traffic on neighboring streets, and others fretted about congestion. Westley Moore was conflicted.

“I’m trying to be open to this change but don’t understand the reasoning,” she commented. “If people just follow the AM/PM parking times, I really feel like traffic moved well.”

The changes are in accordance with the 2018 Bardstown Road Safety Study, which recommends the same lane treatment for the street as far as Princeton Drive, near the Douglass Loop. There are other alterations recommended for the corridor up to Brighton Drive. Coan said full implementation might occur in 2021.

This week’s project only includes striping; the lane lights will be turned off but will remain in place. Eventually, Coan said, he would also like to see them taken down along with the hanging street signs and utility polls. But, it will not happen under his leadership. Coan decided not to run for reelection this year and instead endorsed Cassie Chambers Armstrong, who takes his office in January.

In the past, Coan has told LEO that Bardstown Road’s problems date back to the ‘90s when the street became something of a highway for residents traveling from work downtown to their homes in the suburbs. Businesses serving drivers, such as fast food restaurants, gas stations and auto repair places, started popping up, Coan said. But, there are still many independent restaurants and shops along Bardstown Road that might flourish under the new road plan.

Jimmy Flaherty, co-owner of Parkside Bikes, said he is “thrilled” by the lane switch-up. “It’s going to be great for the neighborhood,” he gushed. “I see it being great for businesses. The street’s going to be way safer. I think it’s going to increase foot traffic and deter this being a through-highway hopefully.”

Flaherty said he often sees drivers going 50 mph on the 35-mph stretch past his store. He hopes the changes will slow them down, and the new parking, in particular, will encourage people to stop, get out of their cars and explore the local businesses. Still, there are more improvements that Flaherty would like to see: a reduced speed limit to 25 mph, perhaps, and more trees along the road.

The striping will cost around $50,000, Coan said, with money coming from District 8’s neighborhood discretionary and capital infrastructure funds.

A little over a year ago, Coan wrote a neighborhood newsletter proclaiming that the “The Doomsday Clock” for Bardstown Road was at “two minutes to midnight.” But, he also wrote in the newsletter that there was hope for the street despite a decline over the years. As he prepares to leave office, Coan feels good about where the corridor is headed.

“I’m actually really thrilled to see this beginning to be implemented before I left office,” he said. “I think that, obviously if we make it through COVID, as a world, with a vaccine and our economy starts to come back, I really think we’ve laid the groundwork. And transforming the road is really going to transform the corridor. And I’m optimistic that this is the beginning of really good times for Bardstown Road and for The Highlands again.”