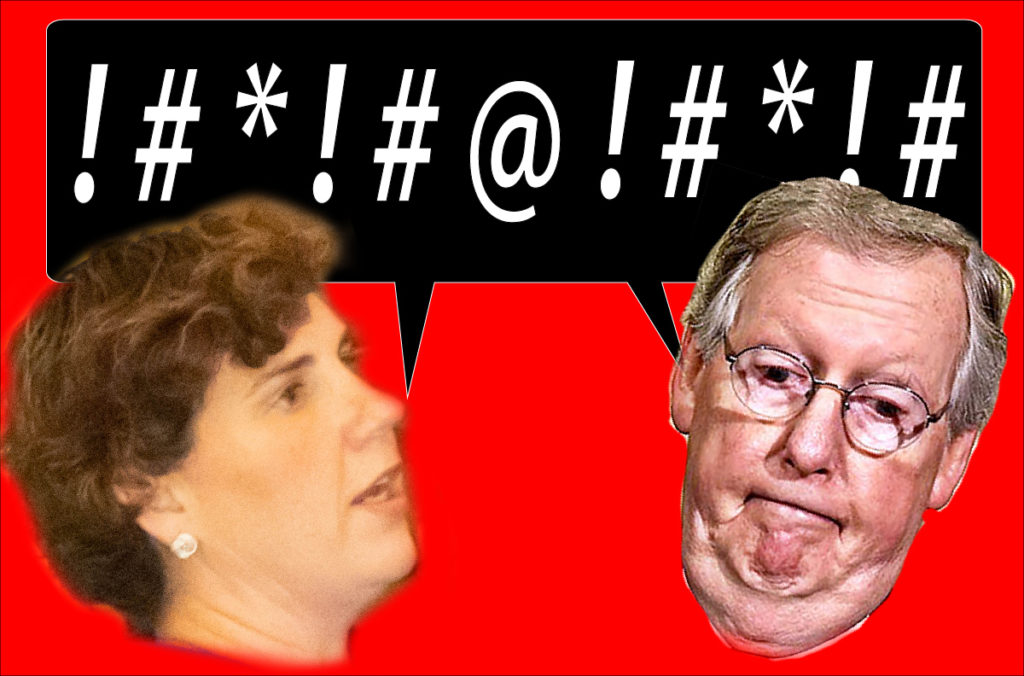 In the only debate of their race, U.S. Sen. Mitch McConnell and Amy McGrath painted very different pictures of the incumbent, on whom the election is essentially a referendum.

The Senate majority leader, seeking a seventh six-year term, portrayed himself Monday night as a supremely accomplished practitioner of politics who gives Kentucky an advantage when states compete for federal money.

“It’s not complicated,” said McConnell, who knows how to reduce complex issues to repetitive, memorable sound bites. “Do you want somebody from New York to be setting the agenda for America and not terribly interested in Kentucky? Or do you want to continue to have one of the four congressional leaders, from our state looking out for Kentucky, giving Kentucky an opportunity to punch above its weight, providing extra assistance for Kentucky?”

McConnell regularly delivers, as someone in his position should for a needy state. But in her last chance to catch and grab him, McGrath argued that he’s focused on being a party leader and not a national leader — not in so many words, but that was the essence of her opening broadside:

“He knew about the dangers of coronavirus way back in January, and did he tell us? Did he come back to Kentucky and say, ‘Hey, we need to prepare’? Did he get the nation prepared and get our president prepared for what was to be this crisis? No, he didn’t. The first time that he said the word ‘coronavirus’ wasn’t until the stock market crashed, and all along, he’s playing these very partisan political games, even now when Kentucky and America needs more aid.”

In response, McConnell blamed House Speaker Nancy Pelosi for wanting too much in the next pandemic relief bill. At that point, sorting out the truth became impossible for viewers, and nearly impossible even for us who try to keep up with Washington intrigue. But McGrath had a Trump card to play.

It’s not just McConnell who won’t pass Trump’s $1.8 trillion package; his fellow Republicans shot it down as too expensive and laden with Democratic goodies. Now, he’s planning a $500 million bill that almost surely won’t get enough Democratic votes to clear the Senate’s filibuster rule.

McGrath said, “If you want to call yourself a leader, you got to get things done,” so look for her to play the Trump card again. It’s her only path to a victory that savvy observers think is out of reach; Trump will carry Kentucky by double digits, so she must get a substantial number of his voters to choose her over McConnell.

That has always seemed like a nearly impossible trick, but McConnell is less popular than Trump in Kentucky, so in theory the trick can be done. However, McGrath has been anything but deft at it, starting with her campaign rollout, which made a ham-handed appeal to Trump voters that turned off Democratic liberals. Then those liberals found an alternative in state Rep. Charles Booker, who nearly upset McGrath in the primary, making any overt appeal to Trump voters even riskier.

But McGrath’s debate performance shored her up with Democrats who saw her as wishy-washy, and if there’s one thing liberal Democrats and Donald Trump agree on, it’s the need for a big relief bill. Unemployment remains high, renters are facing eviction, coronavirus cases are surging, schools are wit’s end, cold weather has arrived, and America faces a very dark winter.

All that should create problems for an incumbent who brags about his ability to deliver for his state and blames others when asked to deliver for our nation.

But as he always has, McConnell has made the election as much about his opponent as about him, and he’s had potent material to work with: her incautious statements in her 2018 House race about being a far-left progressive, opposing government involvement in abortion, and favoring single-payer health care, and her objection this spring to federal officers arresting people at “peaceful protests,” some of which turned into riots.

McConnell’s ads have put McGrath on the defensive in paid TV and down in polls. If she refocuses voters on immediate national needs, we may see McConnell ads tying himself to Trump, a tactic he has used sparingly, perhaps fearing that our unstable president could finally blow up and take many other Republicans with him.

Could that include McConnell? Almost surely not. Almost. Our nation is fraught, and I repeat what I said the night Trump won, and after this year’s primary: “Now almost anything can happen.”