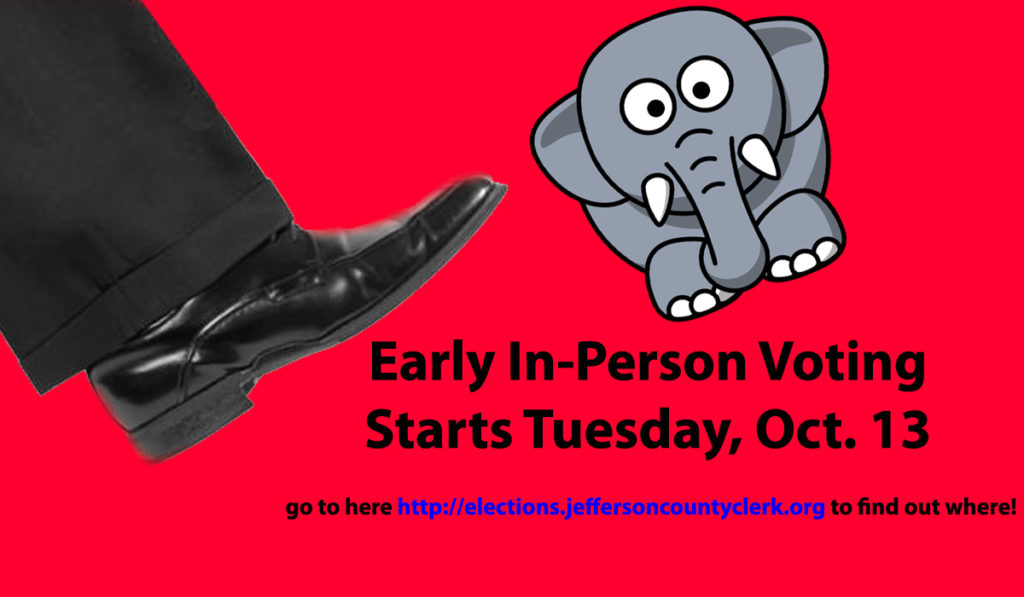 Police Contract Pressure
Anywhere
Free  |  Any time
Mayor Greg Fischer and the River City Fraternal Order of Police (the police union) have revealed their new short-term bargaining agreement, and it does almost nothing to reform the department. Instead, it gives new Louisville officers a pay raise and an option for free health insurance premiums, as well as housing credits meant to encourage officers to live in low-income areas. Louisville organizers are pushing for Metro Council members to vote no on the contract, which they say doesn’t fix existing disciplinary issues. Join them by emailing members of the Labor and Economic Development Committee which is meeting to discuss the contract changes on Tuesday. An auto-generated email with contacts can be found here, or you can craft your own personal message.

Early Voting!
Various locations
Free  |  8:30 a.m.-4:30 p.m.
Voting is fairly easy in Kentucky this year, and the choices are even easier. (Joe Biden or Agent of Chaos Donald Trump? Normal Person Amy McGrath or Grim Reaper Mitch McConnell — tune into their debate on Monday at 7 p.m. on WAVE).

Four early voting centers open on Tuesday, and they’ll be open Monday through Saturday, 8:30 a.m. to 4:30 p.m. until Election Day, Nov. 3: choose from the KFC Yum Center, the Kentucky Exposition Center, the Kentucky Center for African American Heritage or Louisville Marriott East. If you have requested an absentee ballot, you can return it by mail (or drop it off at one of the early voting locations or the Jefferson County Clerk’s Office Election Center by Nov. 3). Many people convicted of felonies are able to vote again in Kentucky, too. You can check to see if your rights were restored by going here.

With all this access, though, of course there’s a new law making voting more difficult: You must now have a photo ID to cast a regular ballot if you are voting in person. If you do not have a driver’s license, you can sign up for a free photo ID by visiting one of the county circuit court clerk’s open offices or the Kentucky Transportation Cabinet’s local regional office. You’ll need to bring a birth certificate, Social Security card and proof of residency.

Finally, make voting a community event by caravanning to the polls with the Louisville Urban League. The organization is hosting a pep rally with food and music on Tuesday at 11 a.m. at their offices. Then, at noon, the LUL will lead a caravan to the Kentucky Center for African American Heritage (one of the early voting locations). There will be LUL caravans each Saturday until E-day.

City-wide Virtual Book Club
Online
Free  |  6:30-8 p.m.
Author Robert P. Jones will talk about his book, “White Too Long: The Legacy of White Supremacy in American Christianity.” He’ll be joined by other local and national faith leaders and academics: Columbia University professor and author of “The Politics of Jesus” Obery Hendrick, Associate Coordinator of Strategic Operations and Outreach for the Cooperative Baptist Fellowship the Rev. Kasey Jones, Stated Clerk of the General Assembly of the Presbyterian Church (USA) the Rev. J. Herbert Nelson and EmpowerWest coordinator Chris Sanders. This virtual “book club” will be streamed on the Simmons College of Kentucky’s Facebook and YouTube pages.

Dinner & Drag in Paristown: A Tribute to Amirage
The Café
$15  |  6:30-9 p.m.
This dinner and drag event is also a tribute to Amirage Saling, a trailblazing trans woman working in HIV services who died last month. Performers are some of the best in Louisville: Karmen Kazzi, TB Sparrow, Shante, Leah Halston, AJ Allen Montrese, Gilda Wabbit, Ominous Situation and Felicia D. Knight. Your tickets are for your seat; you can also buy food and cocktails from The Café at the performance.

Spooky Carnival Movie Nights
Jefferson Square Park
Free  |  5 p.m.
The Black Women’s Collective is now hosting a weekly Halloween carnival at Jefferson Square Park — the hub for Louisville’s racial justice protests. This Friday, there will be a pumpkin decorating contest, food and two movies, including “The Nightmare Before Christmas” and “It Chapter 1.”

Petition: Protesters Schooling At-risk
Anywhere
Free  |  Any time
Ashanti Scott is a UofL student who was arrested while trying to make it to a sanctuary before curfew during Louisville’s protests following the Breonna Taylor charges announcement. The misdemeanors she’s charged with have threatened the financial assistance she receives to attend the school, she writes. Sign this petition to lobby UofL to save Scott’s schooling. It also calls on officials to drop all charges heaped on Louisville’s protesters including other students.

‘Give us the Ballot’
YouTube
Free  |  Any time
Watch Larry Muhammad’s latest work: a short film about Russell P. Lee, the first African American elected to Louisville’s Board of Alderman.

The Black Complex Membership
Encore on 4th
Free  |  9 a.m.-5 p.m.
For the month of October, receive free membership to a new Black business incubator and co-working space: The Black Complex. The Black Complex contains space for members to work, hold meetings and collaborate with other business owners, with WiFi, printing and faxing. Soon, The Black Complex will offer full-scale professional development and training services.

Donations: Black Women’s Health Matters
Various locations
Donation-based  |  Times vary
For the month of October, Change-Today, Change-Tomorrow is collecting health items at its Feed the West drop-off sites. Needed supplies include: new scarves, hats, gloves and socks; new menstruation productions; new breast pumps and other post-natal items such as baby food and diapers; and hair products appropriate for Black hair. Feed the West drop off sites are open every day except for Sunday and can be found here.