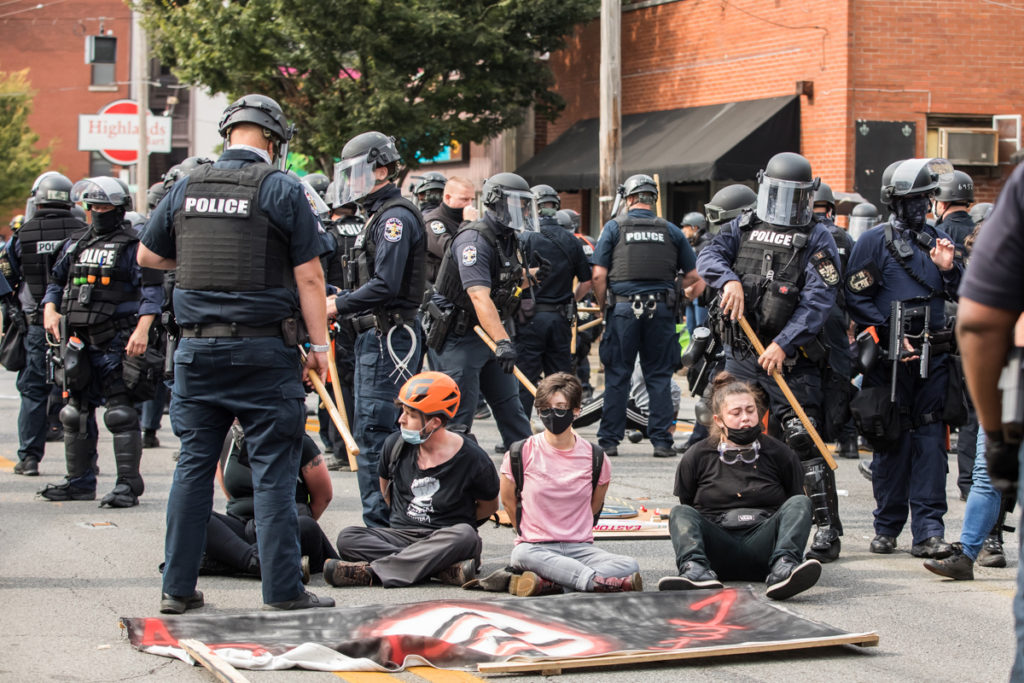 Protesters were ordered to sit after their arms were secured with zip ties. | Photo by Kathryn Harrington.

I don’t know how long I had my hands over my head before realizing I was doing it.

After Attorney General Daniel Cameron’s heartbreaking announcement, I heard the protesters were coming my direction. I went out to meet them and show some kind of support, taking a couple of pictures on my phone as the march approached. The crowd was full of intense energy. Anger and determination. Joy and sorrow. It was a beautiful, sunny day.

Looking north down Bardstown Road, I saw several young men with clubs and metal pipes, threatening the windows of a couple of businesses. One of them tested the window of Ramsi’s Cafe without any intent to break it. Nevertheless, when his pipe clanged against the glass, several from the main body of the demonstration chastised the group he was in. “Stop that shit! That’s not why we’re here. That’s not what we’re about.”

The crowd was policing itself.

This bears repeating: The crowd was policing itself.

As I watched, phone in hand, one demonstrator asked me not to film. I had thought about it, but agreed not to.

This demonstration needed to be documented but not by some bystander like me. This was a matter of literal life and death for many, not a parade for me to post on the internet. This was spectacular, but not a spectacle for my scrapbook. This woman’s polite request reminded me that to photograph in this manner contributed to more objectification of the protestors and the protest itself.

Already struggling with what I should be doing about racial injustice besides writing letters and having conversations, I hear a chant rise up: “Don’t film us. Join us.” And my feet were off the curb and I was with them. I was convinced.

Walking along in my khakis and button-down, I immediately felt like a poser. I needn’t have. I was greeted and welcomed by several people. Still, as the march progressed, I couldn’t bring myself to join the chants. To do so would have felt disingenuous, like I was misappropriating someone else’s grief. I still need to examine this.

A few blocks down Bardstown Road, just past Midland Avenue everything came to a halt. The road was blocked by police in riot gear. You’ve seen this imposing sight on TV perhaps: A phalanx of 20 or more, Kevlar-wearing, helmeted officers carrying sticks which resemble nothing if not baseball bats. A new chant went up, perfect in its simplicity, skewering the logic of the police blockade: “Why you wearing that riot gear? I don’t see no riot here.”

Then, another call: “We need all of our white allies to the front.” I moved forward. Why else was I there, after all, if not to play my part?

I am four deep from the armored wall of police when things go crazy. I heard later that the justification for what followed was because a shot was fired, a fight broke out and the crowd refused to comply with an order to disperse. Due to the piling up of marchers behind this choke-point, there were a few moments when shoving took place between police and protester. But a fight, no. An announcement to disperse: those are far too loud to miss. None was given. Finally, no shot was fired. If there had been, we all would have flinched or ducked. Police included. Didn’t happen.

What did happen was that 50 or so officers swiftly deployed down the sidewalks encircling the demonstrators. A cry goes out: “Don’t let them get behind you.” Many retreated down Bardstown to escape this flanking maneuver, but those up front were enclosed in one or more circles before we knew it.

Now, scuffles broke out as people were prevented from leaving. This is when I became aware that my arms were over my head; a very unusual posture to find myself in. The last time my hands were in the air like this I was at a party being told to “wave ‘em like you just don’t care.” This was no party and as the shoving began and I tried to move away from the chaos, my white ass began to freak out. Cowardice surfaced and I asked one of the officers if I could go home and said that I only lived two blocks away and this was clearly over anyway. His reply: “It’s too late for that. You’re in the circle, now.” I gotta tell you, that is some ominous-sounding shit to hear.

I was simultaneously scared, confused, mad and then, Oh my God, this is what many in the Black community feel like even on days when there is no protest.

Sitting on the curb, watching the people in my “circle” being handcuffed, I continued to plead my case. Eventually, one officer listened, saw the logic in my request and let me and two others go. I say logic, but maybe it was the khakis.

My drama lasted about an hour. I was both proud and ashamed. I continue to be astonished by the courage of those protesters who struggle with these feelings and face these consequences and worse, every day.

On this afternoon, simply put, the police were the aggressors. And I mean the LMPD as an institution. If they hadn’t blocked the street, or been there at all, most likely nothing beyond a temporary disturbance of the peace would have occurred. As it was, their actions closed Bardstown Road for hours, resulted in unnecessary arrests and sent at least two bloodied individuals to the hospital (I presume).

What philosophy leads to such aggression? What is there to do?

I am reminded that it was white people who voted to free the slaves and whose votes passed the Civil Rights and Voting Rights acts. This wasn’t because white people are so eff-ing great but because they were the ones with all the power. Today, we must use our unearned white privilege and all the power and influence that comes with it to help create a safe, equitable society for every citizen.

It can only be good for us. These protesters are leading the way out of fear and hypocrisy toward justice and peace. For everyone. We need to step off the curb more often and join them.

Epilogue: I was not arrested. The woman in front of me was the last in my “circle” to have the zip ties put on when I and the remaining two were released. •

Jeff Twyman is a licensed marriage and family therapist and Louisville resident.