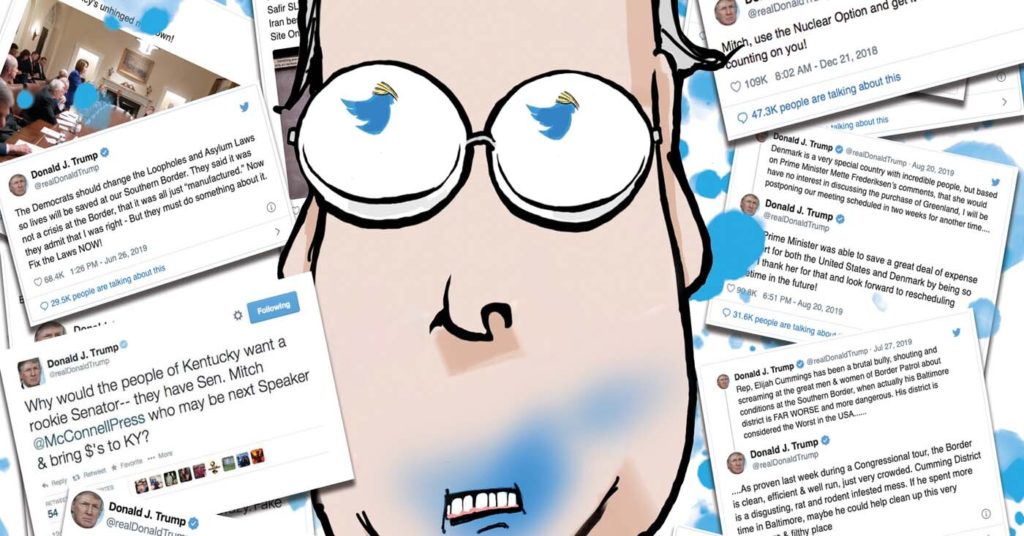 [Ed. note: On Wednesday, the day LEO published this analysis, The New York Times ran a story in which Miles Taylor, the former chief of staff at the Department of Homeland Security, says he is “Anonymous,” the author of “A Warning,” Read his full statement here.]

For two years, U.S. Sen. Mitch McConnell and Transportation Secretary Elaine Chao have played a secret family game to derail Donald Trump’s presidency. They tried hard to cover up their clandestine actions before next week’s election. But truth won, and the family secret is out.

My investigation also shows that Chao is the book author.

Who do I think helped her do this? Mitch McConnell’s speechwriter Andrew Quinn.

I suspected this in February, when LEO Weekly published my comparison of hundreds of pages of McConnell’s speeches to the book. There were multiple echoes of similar language and phrases lifted from speeches that appeared in the book. The high-minded power couple laughed off my evidence, which only encouraged me to hunt for more, and there was plenty to be found.

I have this simple belief that elected officials should have the guts to tell the truth and not lie. Not give us small white lies. Or blatant lies like this breathtaking one, which is up there with McConnell’s grand deceptions about replacing Supreme Court justices or tired arguments about Russian interference in elections.

You see, Mr. McConnell, I have a long memory of what it’s like being a speechwriter for one former senator you keep talking about: Joe Biden. Deceit is not what I witnessed as his Senate speechwriter. When he hired me, he compared me to a golf coach; he said if I tried to change his swing, we wouldn’t get along.

He swung dead straight. He never asked me to write about something during the day and then write the exact opposite at night. He always dealt straight with a fellow senator. He never had me working on the taxpayer’s dime for his wife. No, instead, Jill Biden would supply me stories from her students that I could use in her husband’s speeches.

Nor could I imagine what Fritz Hollings, another one of my former bosses and one of the Senate’s most candid members ever, would think of your antics. After he spoke on the floor, he would send me to the court reporters’ office to make sure every word was taken down correctly for the Congressional Record. He’d always say: “Let the record speak.”

It sure has. Through your recorded words, White House actions, press reports and reading between the lines, I found all the material I needed to link you to Anonymous. Dear readers, you be the judge:

During this month’s debate with Amy McGrath, McConnell continuously made the same argument: I am not from New York, like Chuck Schumer. If you vote for Amy McGrath, she’ll put this New Yorker in charge of the Senate.

But it was McConnell, not the senators from New York, who in June, with 40 million Americans out of work, ran to the Senate floor to express his displeasure that two New York Times editorial editors were pushed out of their jobs after publishing an inflammatory op-ed by Sen. Tom Cotton , R-Arkansas.

What relevance did it have to Kentucky? None.

What relevance did it have to McConnell? A lot.

The two editors are responsible for publishing the infamous op-ed under the Anonymous byline, but I believe they know the name. McConnell, Chao and Quinn have a deep interest in those editors, who have protected the identity of the op-ed writer for 25 months and counting.

Speechwriter Quinn, who previously worked at the American Enterprise Institute where he helped Arthur Brooks write 40 New York Times columns, was so pleased with McConnell’s floor speech, he tweeted about it — five times.

Quinn is an avid tweeter, and I found many tweets where he used the same words, in the same way Anonymous employed them in the book. Words like “snark” when talking about social media, or “circuit breaker” as a way to stop government. On Twitter, Quinn tweeted about “naked political threats,” while in the book Anonymous talked about “naked corruption” and “naked self-interest.” In Quinn’s Twitter profile he quoted George Orwell: “To see what is in front of one’s nose needs a constant struggle.” Who else is an Orwell fan? Anonymous, of course, who describes an “Orwellian up-is-down culture” in the White House.

When I pointed all of this out, Quinn made his Twitter site private; and then he re-opened it like it was a bill before Congress. He watered it down. Deleted the tweets. Even amended his profile — gone was the Orwell quote. What’s that tell you? Guilty?

As I released my analysis in February, the White House came up with the conclusion, through a whisper campaign, that Anonymous is Victoria Coates. The campaign was headed by White House aide, Peter Navarro, the same angry man who likes to wrongly slam Dr. Anthony Fauci. Coates moved from her position as deputy national security advisor to the Department of Energy. RealClearInvestigations wrote a story about why the White House thought it was Coates. Here’s what’s interesting: Many of the same boxes that check off for Coates, check off for Chao.

The White House believes Anonymous is female and started working early in the transition. Chao was an early Trump pick, nominated to her post three weeks after the election. The White House noted Coates and Anonymous share foreign policy goals. Both supported the Iraq War, are committed to never letting Iran develop nuclear weapons and believe in free trade. That is McConnell’s record, too.

Like Anonymous, Coates admires Ronald Reagan and Mitt Romney. Ditto for Chao, who worked for Reagan as a White House fellow and campaigned for Romney in 2012. Like Anonymous, Coates has quoted historical figures and philosophers; and the White House was intrigued that Williams College alumnus, Bernard Bailyn, was mentioned in the book since Coates is a Williams graduate. Guess what? Speechwriter Quinn also is a Williams graduate, and he studied philosophy at the University of Oxford. The White House also noted Coates had a previous business relationship with the two literary agents — Keith Urbahn and Matt Latimer — who represented Anonymous. Both happen to be former McConnell aides and have said Coates is not Anonymous.

The problem is the White House missed the biggest clue: The inspiration for the op-ed and book was John McCain. McCain died 11 days before the op-ed appeared, and Anonymous was upset with Trump’s mishandling of tributes to McCain. McConnell and Chao were friends with Cindy and John McCain for years. What does Coates think of McCain? Two of her former colleagues, in a strong rebuttal in the National Review, described her as not a fan. Coates tweeted that’s a “profound understatement.”

The White House missed other huge indications, too. The meat of the book is about Congress, judicial appointments, tax reform, government deregulation, infrastructure and winning elections — all areas of great concern to Chao and McConnell. And although 84 people are mentioned in the book, McConnell is not one of them. Let’s read between the lines: Do you really think Coates would fail to mention McConnell? Or would that be Chao, protecting her husband?

The reason McConnell and Anonymous use the same unusual vocabulary is because Quinn appears to be writing for both. Even when Quinn thinks he is being anonymous, his habits are hard to break and easy to spot.

In fact, I spotted 33 unusual words or phrases that are in both the book and McConnell’s Senate speeches. According to the Congressional Record, McConnell is often in the minority, one of the few Senators using many of them. Here they are: adults in the room, amoral, ash heap of history, atone, blasting, bull in a china shop, cold feet, condescending, crickets, cross the Rubicon, derided, doubled down, dusting off, echo chamber, galling, guardrail, half-baked, hand-wringing, hyperventilating, jarring, magic words, mocking, plowed, reverberate, rubble, sprawling, theatrics, Trump Derangement Syndrome, unbound, uncontroversial, unhinged, Washington-centric and wander.

I put Joe Biden to the test — did he ever say any of these words on the Senate floor? After all, McConnell keeps pointing out Biden has been in Washington longer than he has. Turns out Biden said only three of the 33 words from 1995 to 2008 (note: 1995 is the first year the Congressional Record is online). Kamala Harris has uttered none of them.

You can hear an echo between McConnell and Anonymous as they lift ideas between speeches and the book. Take “crickets”: Both used it to draw contrasts on Capitol Hill. McConnell during the pandemic: “Over here in the United States Senate, the lights are on, the doors are open . . . and across the rotunda, in the House? Crickets.” Anonymous: “On one side of the aisle, it sounds like nighttime on Capitol Hill. All you hear is the crickets.”

In February, Quinn tweeted an op-ed that McConnell had published in The New York Times back in 2019 on filibusters. Quinn quoted just one sentence from it that had two unusual words: “half-baked” and “whims.”

I knew these were some of his favorite go-to words, so I searched the op-ed archives of the New York Times. Here’s what turned up: Only two op-eds in the history of the paper contain both words: McConnell’s 2019 op-ed and Anonymous’ 2018 op-ed. That’s an indelible, shared signature.

The anti-Trump Anonymous author promised us last November: “Trump will hear from me, in my own name, before the 2020 election.” That promise remains unkept.

Anonymous ducked as we witnessed an impeachment trial, pandemic, economic meltdown, Breonna Taylor’s tragic death and the social justice movement it is inspiring, the death of Ruth Bader Ginsburg, the White House super spreader event where the President himself caught the virus and McConnell’s own refusal since August to go to the White House because he does not like how Trump won’t wear masks and won’t practice social distancing.

Why still the silence? Why hasn’t Anonymous stepped up to be the grand marshal as a parade of prominent Republicans publicly announced they won’t be backing Trump, which is what Anonymous called for in the book? Tuesday’s election. That’s why.

The easiest way to derail McConnell’s own reelection for a seventh Senate term would be to publicly turn on Trump. McConnell may no longer visit Trump. In the debate with Amy McGrath, he did not even say Donald Trump’s name.

Anonymous’ unkept promise is just more proof that McConnell and Chao are behind this charade. They don’t have the fortitude to say: While we defended the president on the most important issues of our day, we also, anonymously, opposed him.

Ilene Zeldin has served as a speechwriter to Joe Biden, Fritz Hollings, Lloyd Bentsen, Lee Iacocca and Bill Daley. She holds a B.A. in journalism from The Ohio State University and an M.B.A. from the University of Dayton.

Denials, no comments all around… Again

Secretary of Transportation Elaine Chao’s chief of staff, Todd Inman, told LEO in February she did not write “A Warning” by Anonymous. “Categorically No, she did not write, help, be involved with, and I suspect won’t even read ‘A Warning,’” Inman said.

And last week, he said nothing has changed.

He did not return a request for comment last week for McConnell or Quinn.