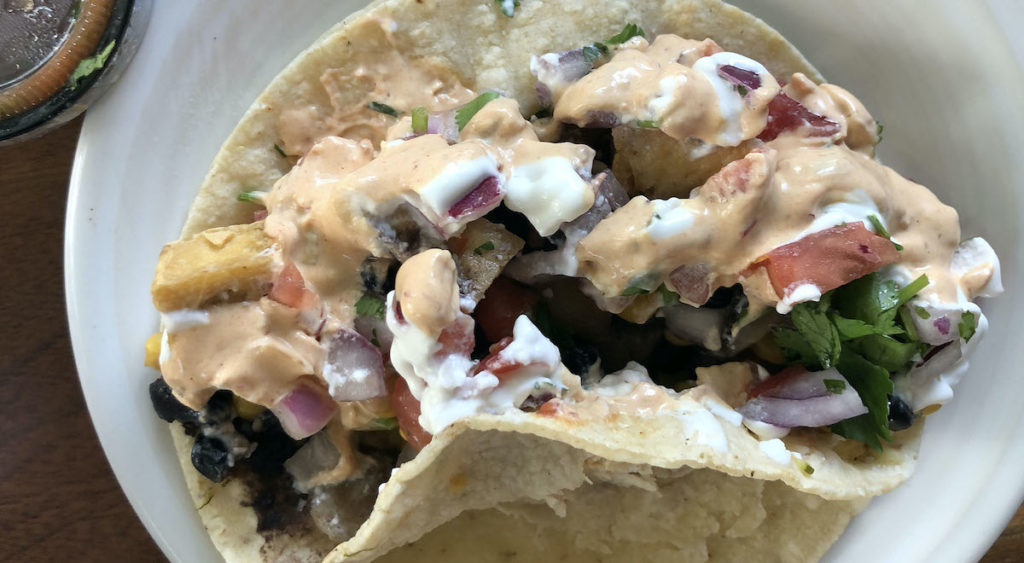 Tofu? On a taco!? Say it ain't so! But trust us: I Love Tacos' version is startlingly good, with cubes of fried tofu smothered in a build-your-own mix of spicy chipotle aoili, black beans, pico de gallo, and cilanto and onion on a white-corn tortilla.

I should have probably gotten out to I Love Tacos in Jeffersontown sooner. It certainly got my attention when its owners were brave enough to open up (takeout and curbside service only) on March 25, one week after Gov. Andy shut down dining in across the state.

And then there’s that “I ❤️ Tacos” logo with an emoji heart. I don’t think I’ve ever checked in at a restaurant with an emoji in its name until now.

But then I Love Tacos’ management announced last week that they’re planning a second shop, in The Highlands. Hoping to open around Thanksgiving, they’re taking over the landmark building on Bardstown Road that long housed ear X-tacy and more recently, Panera Bread.

Co-owners Ernesto Rivera and Alfredo Garcia bring abundant Mexican restaurant experience, after years working at Ernesto’s Mexican near Middletown. Rivera had originally planned to open the J’town shop the week that Beshear ordered a halt to dining-in. Rivera told WLKY-32 at that time, “It was like, ‘Oh my God, what are we going to do now?’ We have everything invested in this, and they shut us down before we opened.”

But they geared up for takeout a week later and have been garnering good word-of-mouth reviews ever since, reopening with socially distanced indoor dining and extensive patio space as soon as the regulations allowed.

On the restaurant website and Facebook page, they describe their approach as “authentic street tacos in a comfortable, fast-casual setting. … We are a local family restaurant and we have different flavors from Mexican, Cuban and Puertorican. Our menu has from the traditional tacos, elotes, nachos, masitas, brisket and more.”

That all sounded mighty good to me, so I checked off assorted goodies on the online menu. It was easy enough to use, although I must have skimmed past the “when do you want it” block, so they gave me a half-hour to hit the road and roar out to Jeffersontown. Just as we got within sight, my phone dinged with a message informing me that dinner was ready. We had to wait a few moments for curbside delivery as I had to hail a patio server to let them know we were waiting. But the delay was short and the wait worth it.

The menu is diverse and interesting and ranks among the best cheap eats around town, with not a single food item topping $9.99. You’ve got your choice of eight appetizers and salads; seven tortas (Mexican sandwiches, all $8.99); two kinds of quesadillas and burritos ($7.99 to $9.99) and more than a dozen tacos, built Mexican-style on doubled soft tacos, your choice of flour or white corn. The tacos are all $3.50 to $3.99 save for a memorable birria taco with broth, which is $8.99 and worth every penny.

There’s a variety of margaritas to go, domestic and Mexican beers, a short wine list and a variety of Mexican and commercial U.S. soft drinks.

We’d been watching the second series of “Taco Chronicles” on Netflix, so my taste buds were set for birria. This is a tradition from Guadalajara in Mexico’s Jalisco province, where it may be made from beef, lamb or goat.

I Love Tacos’ birria is long-simmered, tender and juicy beef brisket piled high on a tortilla that has been grilled in spicy adobo sauce, served in traditional style with cilantro and onion. You get two to an order and that’s not all: Like the old-school French dip sandwich, only much better, the birria taco comes with a tub of rich, intense beef broth seasoned with chopped onions and cilantro for dipping or spooning on your taco. There’s also a tub of salsa verde in the package, a delicious, spicy jalapeño puree.

Masita de puerco tacos ($3.50) were delicious too. Masita is Cuban-style lechon asado: pork marinated in orange and lime juices, garlic oregano and spices and roasted until it’s melting tender, pulled into chunks and then fried. I Love Tacos’ version is served on a double tortilla — we ordered white corn — topped with cilantro and onion.

I Love Tacos’ menu is quite vegetarian-friendly, with a meatless appetizer and a quesadilla, as well as three meat-free tacos. I had never seen or heard of a tofu taco ($3.99), though, so of course I had to try it. It proved to be startlingly good, with bite-size cubes of crisp, fried tofu smothered in your choice of filling ingredients from a long list of options. We chose black beans and pico de gallo blanketed in a spicy chipotle aioli and topped with the usual cilantro and onion on a white corn tortilla.

Corn elotes del barrio ($3.99) starts with a large cob of grilled yellow and white corn painted with mayo and then drizzled with grated queso fresco and red chile powder and squirted with lime juice. The toppings were fine. The corn, the only disappointment, was a bit mature and chewy rather than sweet and crisp.