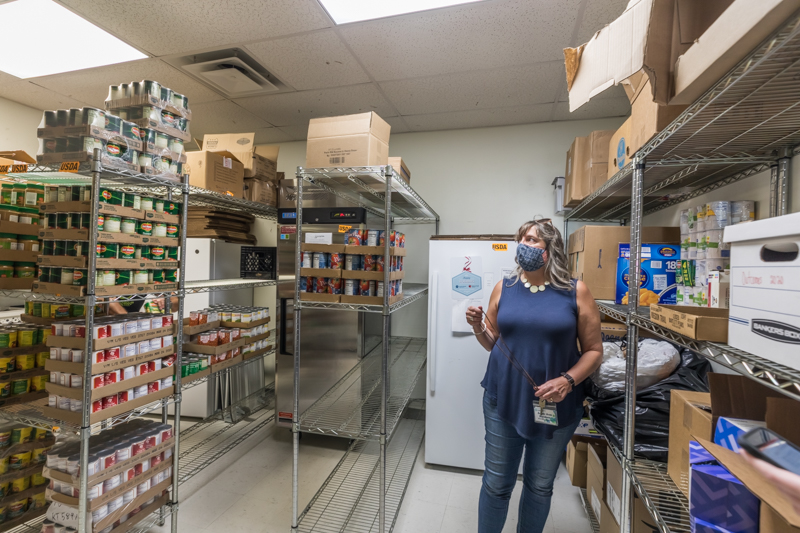 It was the first time the woman had ever visited the St. Matthews Area Ministries food pantry, and she was shaking, Julie Abbott noticed. “I’ve never had to do this; I don’t want to be doing this,” Abbott recounted her saying.

Abbott is the executive director of St. Matthews Area Ministries, which also provides rent and other forms of assistance to an area that many regard as relatively affluent: The median income of the main ZIP code that the ministry serves is $78,750, according to the U.S. Census Bureau. And yet, 100 more families have started using the pantry since January. That’s an abnormally large increase, likely brought on by the COVID-19 pandemic. Last year, the number of families the ministry served only jumped by 20.

Food banks across Northeastern Kentucky and Southern Indiana have reported an increase in users since COVID-19 hit the area hard in March, said Stan Siegwald, Dare to Care’s director of strategic initiatives. Since then, requests for food have risen 30% from its more than 200 partner pantries, which include St. Matthews Area Ministries. To quantify that, Dare to Care typically provides 2 million-pounds of food to the community. Now, it’s giving out 2.6 million-pounds.

“There has, with many of our sites, been a surge in people who have never received food assistance before or people who have not had to get assistance for some time,” said Siegwald, citing anecdotal accounts from partner organizations. “And I think the increase has really been just across the board. It’s in every ZIP code, every demographic.”

While COVID-19 has created more need for food banks, it’s simultaneously strained operations at pantries across the United States. But, comparatively few have shut down in Louisville. The situation is expected to grow worse, however. There were 160,000 food insecure people in Dare to Care’s coverage area before COVID-19. By next summer, that number is projected to increase to 220,000, according to a study by Feeding America, an independent food bank association that Dare to Care belongs to.

On Thursday, 12 families came to St. Matthews Area Ministries to pick up their dolly-full of groceries. The average income in the area may be high, but 6.7% of  residents living in the 40207 ZIP code, which includes St. Matthews and Indian Hills, sit below the poverty level.

Sylvia Robinson, 43, said she has been using the St. Matthews pantry regularly for the past two years to supplement the groceries she buys for herself and her 9-year-old son. That hasn’t changed with COVID. But, because her hours were cut at her call center job at the start of the pandemic, Robinson fell behind on her car insurance and loan payments. Even though her hours were restored a couple months ago, Robinson said she is still struggling to catch up on bills, and the food pantry is helping to close that gap.

“I don’t have to worry about, ‘what are we eating?’” Robinson said. “Because now, different times that I can get food, the food pantry or whatever, that stretches over until my next paycheck.”

At Neighborhood House in the Portland neighborhood, the nonprofit’s food pantry has also seen an increase in visitors. The neighborhood has a median income of around $23,705 according to the Kentucky State Data Center. Last year, it was normal for Neighborhood House to distribute 170 boxes of canned goods, nut mixes, packets of vegetarian chili and other groceries each month, according to Executive Director Jennie Jean Davidson. In April, the organization handed out 238, and that number has stayed high. Some pantry visitors are new to Neighborhood House.

Two best friends, Stephanie Wilson, 48, and Charles Bacon, 71, drove up to Neighborhood House together to grab some groceries in early October. It was Wilson’s second time using the pantry. They both said they’ve struggled financially during COVID. Wilson stopped working right before the pandemic to take care of her grandchildren, but Bacon lost his maintenance job because the renters where he worked weren’t paying their bills.

“Emotionally, it just kind of breaks you down. You feel like you always wanted to help, and now you’re the one who needs help,” said Wilson, who has volunteered in the past. “But, it does feel good that there is a place that is such a blessing.”

Louisville has managed to avoid the long lines of cars that appeared in other cities across the country like San Antonio and Pittsburgh at the start of the pandemic. Siegwald attributes this to only 5% of Dare to Care’s partner pantries shutting down during the pandemic. That seems like a stark number, but Siegwald says it’s good compared to the rest of the country. In mid-April, a third of New York City’s food pantries were closed, according to a hunger-relief group in the metropolis. Other food pantries across the country shut down because they were struggling with finding volunteers, distributing food safely, disrupted supply chains and decreased food donations, according to an April CNBC article.

In Louisville, pantries figured out how to operate with smaller staffs and how to get groceries to those in need safely, Siegwald said.

“It’s been an array of creative solutions to keep food flowing and getting on the tables of families that are struggling,” he said. St. Matthews Area Ministries has transitioned from being open Mondays, Tuesdays and Thursdays from 9 a.m. to noon for visitors to come inside, to asking community members to schedule times on Tuesdays and Thursdays from 11 a.m. to 1 p.m. for drive-thru pickup.

The nonprofit has managed to meet the needs of all of its users, including the 100 new ones, Abbott said. But, it is still in need of financial assistance and volunteers. Its base dropped from 120 to 40 because many of its helpers were vulnerable to COVID-19. And, Abbott is worried about the winter. The ramp that the ministry uses to roll out groceries to food pantry users could become dangerous in the snow.

“We’ve always gone above and beyond, and looking ahead to winter time, this is super stressful,” she said.

The increased need at Dare to Care’s partner pantries has stayed about the same without rising, Seigwald said. He thinks this is because of the state’s moratorium on some evictions and utility cut-offs. Essentially, the public has been able to purchase their own food instead of worrying about other bills.

Dare to Care has been able to continue to supply all the food that its partner agencies have requested through “generous” contributions and increased assistance from federal programs, Siegwald said. But, the amount of food coming from grocery stores that the organization partners with has declined by about 10%. Deliveries are also often delayed because of supply chain issues.

Looking ahead to the projected increase in need, Siegwald said he remains optimistic. Dare to Care’s food sourcing team will continue to look for additional sources of donated food, he said, and he is confident that the community itself will fill the need if asked. “I have seen how the community has supported Dare to Care, so yes, we will do what we need to to make sure everybody has the food they need,” he said.