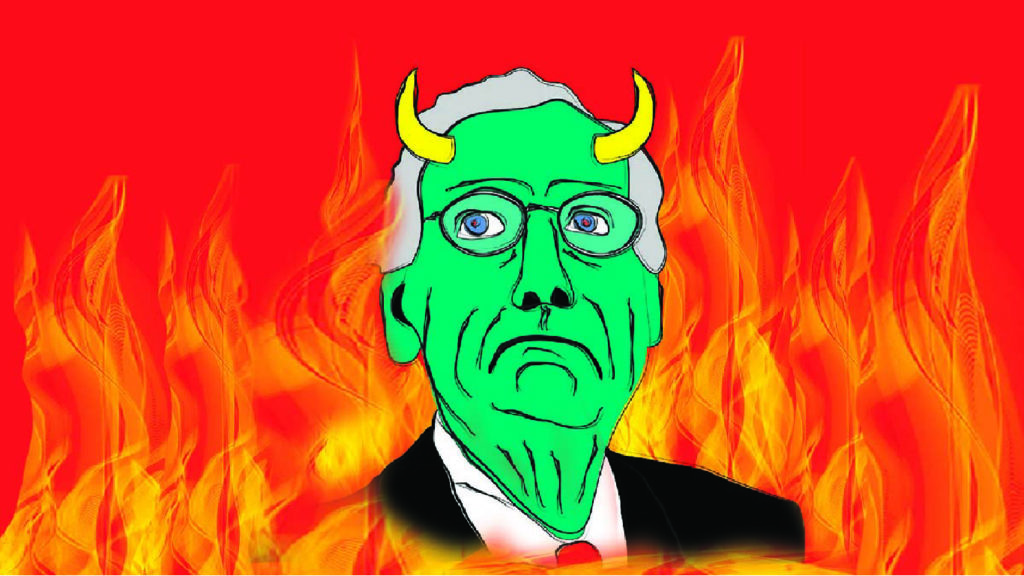 After decades of writing about politics, never have I been so eager — anxious may be a better word — for an election to be over.

That thought came when I read an Oct. 20 story in the Somerset Commonwealth Journal about a Republican rally where U.S. Sen. Mitch McConnell’s campaign manager, Jonathan Shell, declared, “This campaign is about good versus evil.”

U.S. Rep. Hal Rogers had a similar theme: “We’re talking about the survival of the U. S. of A.”

Those Republicans were warning about “socialism,” which isn’t on offer. On the other hand, some Democrats have warned for most of Donald Trump’s presidency that his re-election would bring a much bigger change, “the end of democracy.” Trump hasn’t been good for our republic, but another four years of him wouldn’t doom it.

Extreme rhetoric is nothing new in American politics, but Trump has normalized and encouraged it. So have social media, which amplify extremes, promote crazy conspiracy theories and push us into tribal echo chambers.

Add a mismanaged pandemic and outrage about racial inequality, and you get a big shortage of good will and a surplus of ill will. There’s legitimate concern about post-election violence.

“In the last six weeks, it’s become very concerning,” Michael Barkun, a Syracuse University professor who studies political extremism, told The Washington Post. “This idea that the other side winning the election will produce a precipitous decline and the disintegration of institutions is completely at variance with American history.”

But that doesn’t mean we’re not in a dangerous place, and extreme rhetoric makes it more dangerous, so it’s time to stop using comparisons  such as good and evil, even on issues that are deeply personal.

For social conservatives, the greatest evil is abortion, the taking of what they believe is a human life, even from conception. But for committed liberals, telling a woman what she can do with her own body makes her an inferior human being. The U.S. Supreme Court tried to balance the interests of life and liberty with a decision that established abortion rights, with limits later defined largely by fetal viability. That is too liberal for many Americans, and the debate has changed our politics, making it more about identity, ideology and religion — things that don’t lend themselves to compromise, the essential process of politics. As compromise became an ugly word, debates became less about making laws than about making issues for the next election.

Which brings us back to McConnell. He’s never emphasized abortion in his campaigns, and as a local official let people think he was OK with Roe v. Wade. But in his campaign for a seventh Senate term, he’s running on it by proxy, touting the Senate confirmation of openly anti-abortion Justice Amy Coney Barrett, the filling of every federal appellate judgeship for the first time in 40 years and 162 district judgeships, from which appellate judges usually spring.

He and Trump have remade the federal courts in ways that will be felt for decades —more conservative than the country, probably leading to more conflict.

McConnell told The New York Times his project was “the single most important accomplishment of my career. I’m proud of it, and I feel good about it.” And he told reporters that Barrett’s confirmation would shore up the bases of partisan colleagues in tough races, giving Republicans a better chance of keeping their majority and him in control of the Senate.

But it seems just as likely that McConnell’s tactics — which began with blocking Merrick Garland’s Supreme Court nomination in 2016 — and the supposed threat Barrett poses to abortion rights and Obamacare, will produce just as many votes for Democrats. And at least a few voters will recoil at how much McConnell has politicized the judiciary, or at least the process of picking judges.

McConnell has been a defender of the Senate filibuster rule requiring 60 votes to move legislation, saying it forces compromise. But he and Republicans removed the rule for Supreme Court nominees, allowing party-line votes to confirm ideologues  such as Barrett — or like those Democrats would put up if they abolish the rule completely and use a simple-majority, party-line vote to expand the court.

The majority leader would say that he just followed the lead of Democrats, who in 2013 abolished the filibuster for all nominations except the Supreme Court. But he and other Republicans forced that issue, by slow-walking Barack Obama’s nominations. He  might also say that the modern politics of court-picking began in 1987, when the Senate defeated the Supreme Court nomination of Robert Bork. McConnell said that set a new, more political standard for nominees, changing views he had espoused as a Senate aide.

As Bork was headed to defeat, McConnell read from a law-review article that warned against ideological opposition to nominations and referred to the last time the court was expanded. Today, those words drip with irony:

“When, as in Reconstruction, senators treat the Supreme Court as a political institution that they expect to hew to a particular ideological line, the public is likely to see the court in the same light, and so is the court itself.”

That’s not evil. But it’s not good, either.