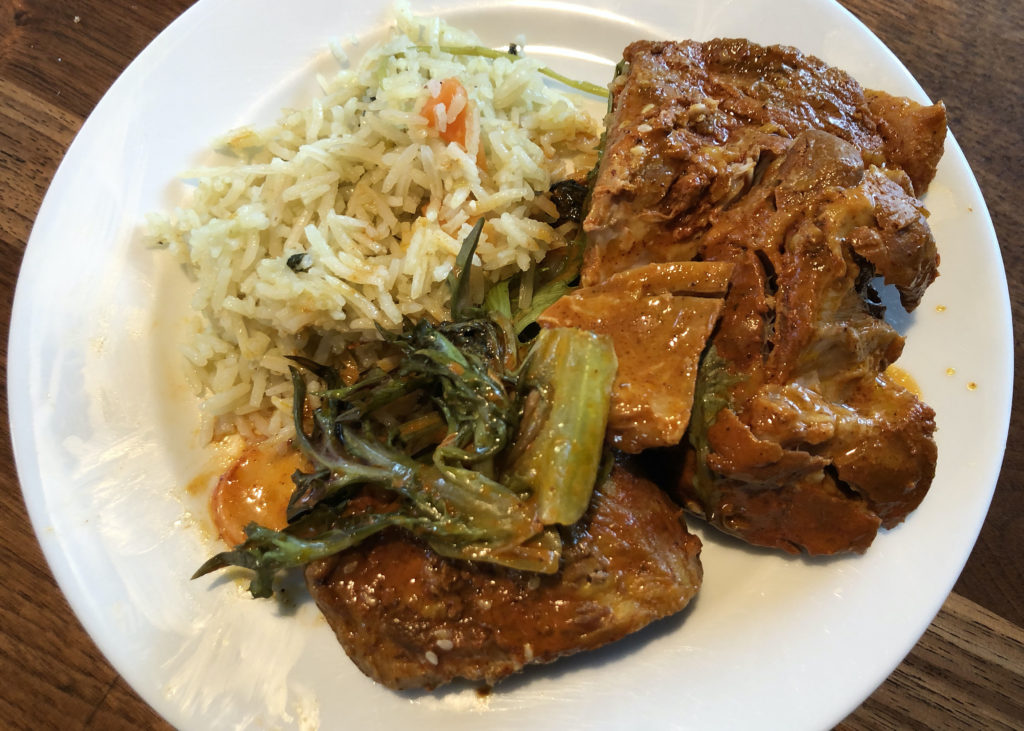 Cochinita pibil, the long-roasted tender pork that's a classic of Mayan cuisine, is a signature dish at Mayan Cafe.

Cochinita pibil. These two Spanish words — one common, the other not so much — offer us a bright light into both the Mayan cuisine of Mexico’s Yucatán peninsula and neighboring Guatemala and into one of Louisville’s favorite south-of-the-border restaurants, Mayan Cafe.

So what’s a cochinita pibil? A little pig — that’s the easy part. It is long and slowly roasted in a large metal box, lowered into a pib, the traditional Mayan fire pit and marinated with tart, flavorful sour oranges and Mayan spices.

Mayan Cafe doesn’t have a giant fire-in-the-hole in the tiny kitchen of its NuLu home, but I can testify that Chef Bruce Ucán’s oven-roasted rendition is one of the most amazing things I have ever seen done to pork.

I know you’re salivating to hear more about this amazing Mayan pork dish, but we’re getting a little ahead of ourselves. Let’s talk about what makes Mayan Cafe such a favorite, starting with this crazy pandemic that’s shuffling all our lives into a new not-so-normal. Back in March and into April, after Gov. Andy Beshear ordered a stop to dining in restaurants (and for a while, even on patios), it wasn’t clear to many of us whether our favorite restaurants would survive.

But I didn’t worry. Ucán is a survivor, and he has been selling and advocating for Mayan cuisine since the 1980s when he drove a big blue taco truck called The Mayan Gypsy to suburban construction sites. He opened his first brick-and-mortar shop right where he is now in 1987, across Market Street from what was then Wayside Christian Mission. After a brief move to larger quarters a few blocks west that didn’t work out, he returned in 2007 to where he began, remodeled, just in time to catch the rising NuLu wave, and he’s been there since.

Ucán has been in the neighborhood, earning consistent applause, ever since. But then the pandemic shut down dining-in in Kentucky restaurants on March 16. It would be June 22, 98 days later, before Mayan Cafe opened its dining room for limited 33% capacity again. Naturally I couldn’t wait to get back over there, not least to get some of that cochinita pibil.

The menu is mostly Mayan, of course, and as the menu says, “fusing traditional Mayan flavors, ingredients and cooking techniques with local, sustainably-farmed ingredients.” The online menu features seven starters, eight entrées, five sides and a trio of desserts. It offers a good, short tour of Mayan cuisine leavened by a few more domestic options such as a veggie burrito and a Mayan burger.

Pricing is well above many local Mexican options, but quality makes it worth the toll. Appetizers range from $8 (for sikil pak, a Mayan twist on hummus made with pumpkin seeds) to $14 (for scallop ceviche with Mayan flavors). The entrées start where the apps leave off with a $14 veggie burrito, then range upward to $25 (for pan-seared verlasso salmon turned Mayan with an earthy cuitlacoche sauce).

All Mayan Cafe’s meat comes from local farms, as do seasonal local produce and cheese. Consider that amazing cochinita pibil ($23), for instance: It may not be made from the rare, heirloom, hairless pigs that are being reintroduced in the Yucatán, but pastured Bourbon County Garey Farms pork makes a worthy substitute. The finished pork came in huge, velvety soft chunks of lusciously fatty, boneless pork, so tender you could eat it with a spoon; soaked, bathed and coated in its creamy, bright-orange liquid that it had roasted in. The sauce’s predominant flavor was citrusy sour orange with a haunting, minty note. It was tinted reddish orange by earthy notes and gentle spice added by the Mexican spice achiote; the flavors perfectly complemented that of the rich, juicy pork. It is an amazing dish. Yucatán-style rice on the side was bathed in flavorful oil and dotted with corn niblets and bits of carrot.

Another main dish, cactus stir-fry ($19), gave vegetables the same kind of loving treatment that cochinita pibil delivers to pork. Tender green nopales (cactus), yellow squash and poblano peppers were cut into bite-size bits and stir-fried together with kale leaves until all were cooked through but not wilted, then served on a bed of quinoa.

Another Yucatán specialty, piquant dark-orange fried tomato puree, was served on the side as a sauce. The disparate flavors and textures made this a memorable dish. If you’re wondering what stir-fried cactus tastes like, I’d place it on a flavor spectrum between a green bean and okra. I like it.

Another Mayan Cafe specialty, Yucatán-style tok-sel lima beans ($5), wasn’t up to par this time. The limas had been cooked to crisp-tender perfection and tossed with finely chopped parsley and ground pumpkin seed as per tradition, but the overall impression was not bright but tired, with a dull earthy back flavor. It was a small complaint in an otherwise spectacular meal. We’ll be back!