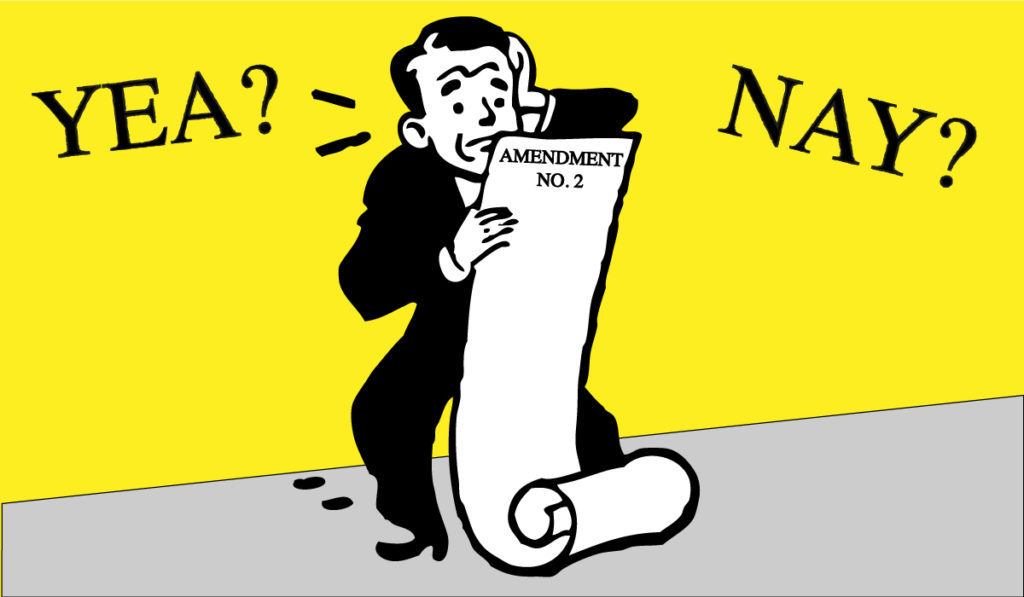 As our tumultuous, pandemic-extended election consumes the country, this space takes a breath to offer a closer look at something important on Kentucky’s ballot and a look back at a political kingmaker. If your ballot has several races, you may miss one or both of the constitutional amendments on the back. You may have heard of the first one, “Marsy’s Law” to establish rights for crime victims, but chances are you haven’t heard about the other one, which also deserves your attention.

Amendment 2 has a lot of constitutional verbiage, but all you really need to read is Section 1:

What the ballot language and the news reporting about it don’t tell you is why the legislature is asking voters to lengthen the terms of district judges and prosecutors. It’s really as much about circuit judges as district judges. The circuit judges’ caseloads are horribly unbalanced, so the circuits (and the districts, which almost entirely correspond) need to be redrawn to even out the work and, in some cases, make room for more judges to handle it. Changing those boundaries is politically difficult, because the judges’ and prosecutors’ terms usually don’t line up, so the amendment would give them all eight-year terms, starting 10 years from now, one of the rare times that they do line up. That would clear out most of the political obstacles to legislating a new court map that would start in 2030.

“You’re not going to re-circuit unless the commonwealth’s attorneys are for it,” said state Rep. Jason Nemes, R-Louisville, who once ran the Administrative Office of the Courts and shepherded the amendment to the ballot.

The idea of giving district judges eight-year terms has its critics, and they have a point. If we’re going to elect judges, it makes sense for those at the bottom of the pecking order to have shorter terms, to be more responsive to the public. But there are effective procedures for punishing and removing judges who misbehave, and the amendment has a sweetener: requiring district judges to be licensed attorneys for eight years instead of the current two.

Two years is far from long enough. It’s a relic of the last big constitutional amendment on the judiciary, in 1975. One thing that measure did was create district courts, to replace county and city courts and require judges to be lawyers. Fearing that many rural areas wouldn’t have enough lawyers to fill the seats, the authors of the amendment set the experience bar low. Raising it would give us better district courts and the amendment as a whole would improve the administration of justice.

“You can have judges all over the state who have … never taken a deposition, never tried a case, never been a real lawyer,” Nemes said. “This isn’t partisan; this is just nuts and bolts, let’s improve the judiciary.”

Terry McBrayer, who died at 83 on Oct. 11, was mainly known in the last half of his life as a lawyer and lobbyist who was influential and sometimes powerful. Those adjectives dominated the news coverage of his death and the accounts of his life, but strangely they missed something that may have been his greatest legacy: the eight-year governorship of fellow Democrat Paul Patton.

In the 1995 governor’s race, our only one that has had spending limits for candidates, McBrayer ran the state Democratic Party and the parallel campaign that made the difference in Patton’s race with Republican Larry Forgy, who was the favorite of many insiders. After a tough primary, “I was a deer in the headlights,” Patton told me after McBrayer passed.

Consultants to President Bill Clinton, a McBrayer buddy, produced ads that accused Republicans of planning to sell federal lakes and other fanciful notions, hanging the increasingly unpopular Bob Dole and Newt Gingrich around Forgy’s neck. They became one person, “Dole-Gingrich.” McBrayer and others raised the ad money and Patton won by 21,560 votes out of a million cast – and was easily reelected in 1999.

“Without him and [regular campaign manager] Skipper Martin, I wouldn’t be elected,” Patton said. “He made me governor of Kentucky.”

For McBrayer, that victory must have soothed the wounds of 1979, when he was the nominal front runner in the governor’s race, by virtue of being then-Gov. Julian Carroll’s commerce commissioner, then faded as the administration (but not him) became mired in a federal investigation. He ended the race broke, went back to the law and helped form a national network of state-capital lobbyists and lawyers that included Hillary Clinton.

He ran the state party for only a few months, but relished being called “Mr. Chairman,” which I did for years afterward. People like him made covering politics fun. He was ebullient, solicitous, courteous, savvy and incisive. “He had the people skills to do anything,” Patton recalled. “He was always enjoyable to be around.” And that means we will miss him.

Al Cross, a former Courier Journal political writer, is professor and director of the Institute for Rural Journalism and Community Issues at UK. He writes this column for the Kentucky Center for Public Service Journalism. On Twitter he is @ruralj.