The city of Louisville settles with Breonna Taylor’s family for $12 million and enacts policing reforms but won’t fire all the cops who rained down bullets on this unarmed woman in her home? We hope the payout is not meant to soften any decision on whether the officers are charged. But, if any good comes of this, maybe it will be that such a tragedy can never happen again in our city.

The GOP wants you dead | Thorn

Kentucky hit a grim milestone last week: more than 1,000 COVID-19 deaths including a single-day record of 22 last Thursday. Gov. Andy Beshear said tough measures capped the surge. But he called out lawmakers who ask whether the numbers are inflated. “Shame on anybody, including many of our legislators and those that sit online all day, who claim those deaths aren’t real. There’s 1,000 families that will tell you they are very real and very painful. Let’s be better than that,” Beshear said. 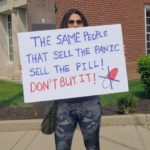 Conspiracy talk like that likely inspired the 10 people who held signs in St. Matthews that reminded us of anti-fluoride protests, but, hey — don’t panic over a pandemic that has killed more Americans combined than died in World War I and wars in Korea, Vietnam, Afghanistan and Iraq. You know, every life is sacred.

After tRump conceded that in February he purposely played down the coronavirus threat, contributing to, if not causing, the deaths of tens of thousands of people, he released a shiny object to distract our squirrel brains: a list of possible U.S. Supreme Court justices. They include state Attorney General Daniel Cameron, a puppet of U.S. Sen. Mitch McConnell. When asked what they thought about a Justice Cameron, any sane person with an IQ higher than a potato’s said: “Ha ha hahaha! Ha ha haha!

UofL issued a public safety alert for a “Black male wearing a red hoodie.” That put a lot of people in danger. President Neeli Bendapudi apologized: “While the description may have been true, it is too vague to be of any help and it perpetuates negative stereotypes (especially on a campus whose colors are red and black and whose student population is proudly more than 12% Black) that makes some members of our campus community targets.”

CJ takes it on the head | Thorn

Activists hated this Courier Journal headline, “Will Calm or Chaos Win?” It was over a story about how protesters may react if Breonna Taylor’s death brings no charges. Poet-activist Hannah L. Drake tweeted: “Saying chaos adds to a narrative I am working overtime to stop.” The CJ news director tweeted: “We will try to do better.”