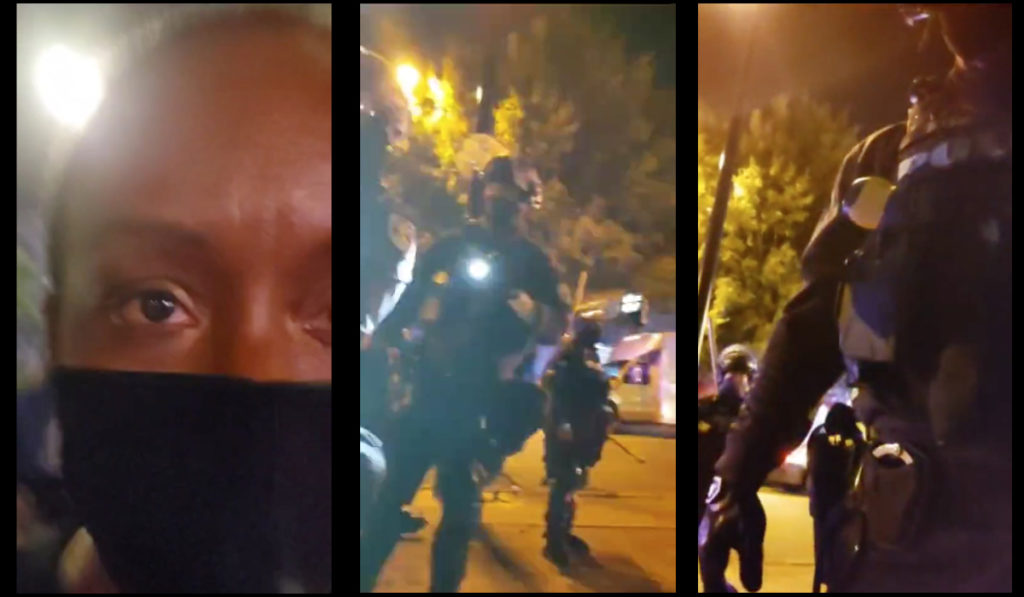 A series of images from state Rep. Attica Scott’s Instagram video of the moments before she was arrested last Thursday before curfew and while walking to a church.

Wake-Up Wednesdays Virtual Vigils
Online / Big Four Bridge
Free  | Noon-12:30 p.m., 5-5:40 p.m.
Every week for 12 weeks, faith leaders of various traditions plan to host a “gathering of intentions, silence and spoken reflections” on Facebook Live and Zoom at noon. They’ll also be hosting in-person, silent vigils at the Big Four Bridge from 5 to 5:40 p.m. LSURJ Faith, Sowers of Justice Network and the Interfaith Coalition for Immigrant Justice have created this program, called the Sacred Space Campaign, which is meant to “envision new approaches to community safety.”

Drop Charges Against Leading Activists
Anywhere
Free  |  Any time
On Thursday, several local activist leaders were arrested on charges of felony rioting, including state Rep. Attica Scott, her daughter and Shameka Parrish-Wright. In Scott’s arrest citation, police said that she was part of a larger group that set fire to the Main Library. But, livestream footage taken by Scott shows that she and her companions were not involved with a flare being thrown into the library’s window. Ashanti Scott, Attica’s daughter, is calling on the public to contact Jefferson County Attorney Mike O’Connell to drop the charges against her, her mother and Parrish-Wright. Call 574-6336 to make your plea.

BLM Demands
Anywhere
Free  |  Any time
Black Lives Matter Louisville has released a revised set of demands for changes in the city in the wake of the Attorney General’s announcement about charges in the Breonna Taylor case. You can post the demands to your social media. They include:

— “Immediately fire and revoke the pensions of the officers that murdered Breonna.”

—“Divest from LMPD and Invest in community building”

—“A local, civilian community police accountability council that is independent from the Mayor’s Office and LMPD with investigation and discipline power. #CPAC.”

—“The creation of policy to ensure transparent investigation processes”

Buy Black Lou
Various locations
Prices vary  |  Any time
If you want to go anywhere this week or do anything, check the Buy Black Lou business database first. This list of Black businesses in Louisville and Southern Indiana contains restaurants, home services (like electricians), stores, business services and more. There’s a website and an app.