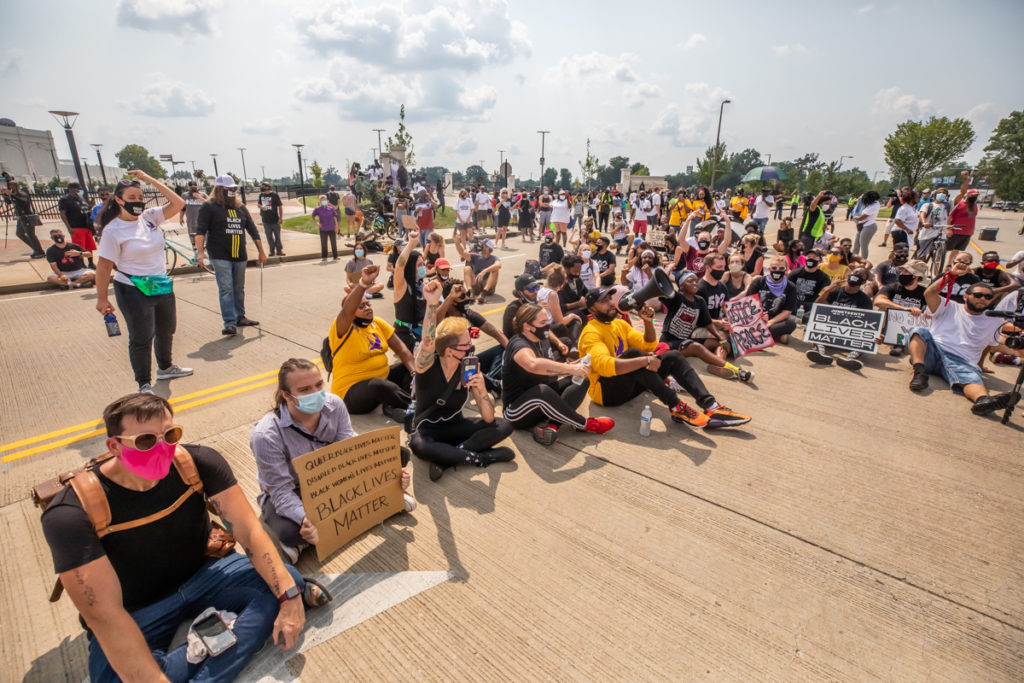 For the ‘Good Trouble Tuesday’ protest, demonstrators gathered on Central Avenue outside of Churchill Downs and sat in the road awaiting arrest. | Photo by Kathryn Harrington.

On Tuesday, Aug. 25, Louisville was supposed to have been shut down by 600 cars and destroyed by thousands of Black militia.

It didn’t happen, of course.

Amid the protests for the unjust killing of Breonna Taylor by police, Louisville became the victim of a runaway reaction to pernicious disinformation and rumors spread and exaggerated by social media. Fear swelled to such a pitch that city and state police made special plans, businesses and schools shut their buildings and people avoided the streets. What occurred in Louisville that day should be a lesson to cities throughout the country about the consequences of allowing disinformation and rumors to dictate action.

On Thursday, Aug. 17, an image began circulating on Facebook of what appeared to be a report from the FBI’s National Crime Information Center, or NCIC, although its authenticity has not been established. Ascribed to Louisville police Maj. Aubrey Gregory, the report stated that “a local group of individuals” intended to “shut down” the city by rather unusual means:

“The plan is for part of the group to use approx 600 vehicles to block interstates.… Once the interstates are blocked, participants will hold mock funeral processions along the interstates. While law enforcement responds to the blocked interstates, other group members will ‘caravan’ to the homes of [the mayor and attorney general] and will cover their yards with fake tombstones and cemetery-themed decor.”

At a press conference, Gregory was asked about the report, and he replied, “So, I knew that was coming, so it got my name on it. The NCIC communication is confidential” and “I can neither confirm nor deny if that statement is accurate or correct.”

Earlier in the press conference, he said: “Some of the information we have received, some of those rumors, do include traffic shutdowns, ‘peaceful sit-ins,’ if you will, on the roadways, and we are prepared to respond to that.” Peaceful sit-ins on the roadways is a far cry from 600 cars shutting down the interstates.

The report did not mention a date, only that the attack might “occur in mid to late August.” But on Aug. 18, Louisville police Chief Robert Schroeder released a memorandum designating Tuesday, Aug. 25 as an “All Work-Day,” meaning all officers would be on duty. Aug. 25 was the date of a highly publicized protest march by “Until Freedom,” a New York-based social justice group that had come to Louisville earlier to help support the protests. By the weekend of Aug. 19, the NCIC report had somehow been conflated with Until Freedom’s “Good Trouble Tuesday,” and rumors swept through social media.

They included that “up to 2,000 people and 700 cars” from “Black militia” groups were “coming to shut down our interstate system.” One claimed that they plan to “use stolen cars to block streets and highways.” Another declared that “these aren’t kids but thugs with connections to organized crime.” Others said of the imagined villains that “they are domestic terrorists,” and that they “have a history in other cities of looting, carjacking and accosting women.”

Finally, paranoia took hold and some regressed to a disturbing, hysterical expression of fear:
“Do not let your kids around St Matthews or go out in Louisville alone.”
“Do not go out by yourself or with a group of women/girls.”
“They intend to target women out shopping.”
“Look out single women drivers you are a target!”
“They WILL be carjacking looking for females by themselves”
“A black militia is out to get as many white women and carjackings as they can”
“THEY WILL BE TARGETING WHITE FEMALES!”

Anyone remotely familiar with the history of racism in the U.S. should recognize the significance of those words. The myth of the Black man out to rape white women has long been used to rouse intense fear within the white population. This is the kind of extreme fear that drove people to hang Black men from trees while others gathered to watch and cheer.

We have no way of knowing how many of those statements were just written by trolls or bots or people in other countries, nor how many people have actually reached that extreme. But if we ignore that people are being pushed toward such extremes, it will only spread further and grow stronger.

These kinds of rumors typically circulate only within small conspiracy theory groups. But most of the quotes above were also shared by individuals on Facebook and NextDoor. Unfortunately, the police and other leaders helped to spread fear across the city by posting on social media and speaking directly to citizens and businesses, warning of imminent danger coming on Aug. 25 and advising them to stay home and close their businesses that day.

St. Matthews residents said police sent a warning to local businesses claiming that “busloads are expected to arrive…from all nearby major cities” and that “the purpose of this event is to DISRUPT travel [and] commerce.”

Tracie Texas Shifflett, executive director of Louisville Metro Police Foundation, warned on social media of “several out of town groups that will be converging on Louisville” and that “approximately 600-700 cars will be blocking the expressways.” She ended with, “My advice would be if you or your family can stay home that day, I would.” On his Facebook page, state Rep. Thomas Huff, a Republican from Shepherdsville, wrote that he had “received word that THREE groups (associated with NFAC) are either in or coming to Louisville this week to block roadways and streets” and added the ludicrous claim that “They are threatening to stop white motorists and pedestrians demanding Reparation Money for Slavery!”

People were afraid. Humana closed offices. TARC canceled buses. Some private schools switched to NTI for the day. Paddock Shops restaurants pulled all of their outdoor furniture inside. Though not completely to blame, the Louisville police should at least admit some responsibility for stirring that fear.

After the march had ended and the protesters dispersed, interim-Chief Schroeder delivered a “protest update” to the press, in which he gave a brief and mundane rundown of the basic facts of the day. A few hundred protesters had gathered at a small park in the middle of the city and walked down the street in a peaceful march. Then, 60 to 70 protesters sat in the street to get arrested. Schroeder conspicuously avoided talking about the elephant in the room: the fact that nothing had happened.

During the time of the march, I drove back and forth along the interstates. I encountered no cars blocking ramps nor any evidence of traffic congestion. A few days later, I received the following text message from an executive at James Graham Brown Cancer Center: “I was at the JGBCC last Tuesday. It was a totally normal day and everyone was in as normal. The highways weren’t blocked. I drove there and we were open like normal.”

What happened on Tuesday, Aug. 25 in Louisville was the equivalent of a school bomb threat on the scale of an entire city, and the reaction was equally severe. Police mobilized their forces while thousands of citizens stayed in their homes for fear that the roads would be too dangerous. That reaction cannot be allowed to set the precedent for similar outbreaks of disinformation and rumors that are sure to come.

An attempted shutdown of the city should be considered a serious crime. Yet no one seemed inclined to treat that day with the seriousness it deserved. The police and FBI should investigate this with all the rigor with which they would investigate a false bomb threat. If the police know who fed them such flawed intelligence, they should hold those sources accountable. If they do not know who fed them the disinformation, they should work to find the perpetrators.

Many people inevitably blamed the protesters for the disruption that day. As one person commented, “More waste of tax payer dollars thanks to ‘protesters’.” Yet the disruption of the city had nothing to do with the protesters. They merely did exactly what they had announced: a simple, benign protest march.

Three points about this incident must be clearly understood:
1. The protesters did not cause a “disruption” or “destruction” of the city.
2. All of the rumors were untrue.
3. The rumors themselves were the cause of the disruption.

The protesters were not a danger to the city that day. But a new form of danger was revealed that we have yet to reckon with: people who relentlessly create and spread disinformation and rumors designed to foment irrational and unwarranted fear throughout the community.

The police reacted exactly as intended. They mobilized against a phantom, partially of their own making. To avoid such overreactions in the future, they must devise a way to neutralize pernicious rumors and diffuse disinformation bombs before they explode.

At the press conference mentioned above, Maj. Gregory said: “We hear lots of rumors about things that might happen. We take those rumors seriously, and we always prepare a response to that. Some of it happens, and some of it doesn’t.”

And therein lies the problem. Anyone can say anything in the anonymity of social media, no matter how false or how dangerous the potential consequences. The police are in a precarious position. They can’t ignore legitimate warnings, but if they take every rumor seriously they’ll be continuously chasing after illusory threats. They must figure out a better way to recognize disinformation.

There are no easy answers. Disinformation is incredibly difficult to distinguish from genuine information. A dedicated team trained in skeptical critical thinking and the social psychology of cognitive biases, conspiracy theories, and mass hysteria would be a good start.

And what about the rest of us? How do we guard against being taken in by disinformation and rumors? We should strive to develop a mental habit of critical skepticism. Read books such as “How We Know What Isn’t So” by Thomas Gilovich or Carl Sagan’s “The Demon Haunted World.” Listen to podcasts such as “Inquiring Minds” or “Point of Inquiry.” Before spreading a meme or rumor, take a moment to consider its plausibility and check on the veracity of its claim.

The Aug. 25 disinformation bomb in Louisville demonstrated how easily a city can be riled into a state of panic. I fear that what happened that day was like a test trial of the bomb, and that future iterations will only be larger and more dangerous. The way the police handled this one must be fully analyzed so we can learn from our mistakes, for Louisville and every other city at risk of this new threat. Protesters sitting down on a street or standing around in a park at night are the least of our worries.

Dan Delaney lives in Louisville and has a master’s degree in sociology.