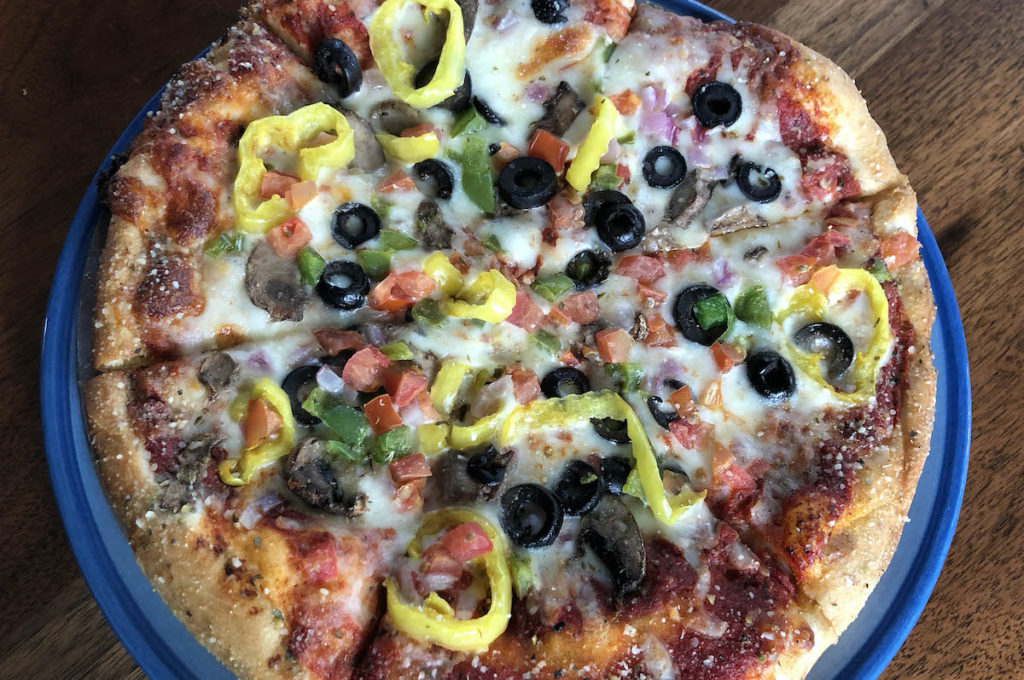 I’ve been doing my small part to keep local restaurants alive during the pandemic by giving them my takeout business, but there’s a problem with that: I really hate eating lunch on my lap in the car.

I want to take the food home, dammit! I want to plate it nicely and enjoy it in a relaxed setting. But I can’t keep hot food hot and the cold food cold for very long. I’m still trying to figure this out. The best I’ve come up with so far is either to order dishes that are good at room temperature or fare that takes well to reheating.

Then it hit me: Pizza!

Pizza is that rare dish that’s delicious sizzling, melting hot but also tastes perfectly good at room temperature and offers its own special charms when you pull a slice out of the refrigerator, ice-cold!

Happily, Jeffersonville’s popular Parlour, an excellent pizzeria at the north end of the Big Four Bridge, just opened a second branch, on Frankfort Avenue, quickly taking over from the recently closed Craft House.

Apparently undeterred by the pandemic and its social-distancing limitations, Craft Culture Concepts, the new corporate owner of both Parlours, not only turned around the Frankfort Avenue space in less than two weeks, it also plans to open two more restaurants soon — Smoked on Second and One Thirty Three Bar + Bites – in the space formerly occupied by Griff’s at 133 W. Liberty St.

The move from Craft House’s broad international menu to a simple pizzeria offering makes sense to me in these troubled times. Pizza has always been a popular takeout dish, fast, convenient and good warm or cold. On the other hand, pandemic or not, management is happy to welcome us for pizza and a pint from their many beer taps. “We’re all about bringing people together in a laid-back atmosphere,” the restaurant’s Facebook page assures us.

That’s nice of them, but we went with takeout anyway. Curbside pickup didn’t seem to be available, but I didn’t mind, as this gave me a chance to run in without getting close to anyone and, of course, to take a quick look around. Yep, same place, although the wall now bears “Parlour — Pizza and Pints” in white paint on gray.

The menu is primarily about pizza, of course, and it is very good pizza indeed. I’ve rated pizza highly at the Jeffersonville shop, and I think our pie from Frankfort Avenue may even be a step or two ahead.

A dozen pizzas come in two sizes, 10- and 13-inch and range in price from $10.99/$13.99 (for the OG pizza with red sauce and mozzarella only) to $15.99/$18.99 (for the Alfredo, which adds minced garlic, bacon, diced tomatoes, chicken and spinach to the traditional Alfredo blend of mozzarella and shredded Parmesan.)

Not everyone loves pizza, though, so there’s also a choice among 10 starters and salads (from $6.99 for an order of bruschetta or most of the salads to $11.99 for loaded parlor nachos). That’s not counting the party-size order of 50 wings for $46.99! Four seasonal sandwiches, all $8.99, are chicken bacon ranch, meatball, BBQ and buffalo chicken.

We went with the traditional blue cheese from a choice of sweet BBQ, tropical habanero, Sriracha bourbon or buffalo sauce, casually assuming that the wings would be buffalo-style, but nope. They’re different and really good. Six wings — three flats and three drumettes — were large and meaty and stayed hot all the way home in their white, plastic-foam box. Unbreaded, they had been dusted with an intriguing spice mix before grilling. We picked out distinct cayenne and an appetizing subtle hint of something like anise. The meat was juicy and the skin crisp and delicious, and we wished we had gone for a larger order.

The Caesar salad ($6.99) was basic but contained the necessities, and it was large enough to feed two. Fresh, crisp romaine had been cut into bite-size squares and tossed with shredded Parmesan and a lot of tiny, herbed croutons. Creamy, garlicky, white Caesar dressing came in a separate tub. We mixed it with the dressing and served it right out of its carry-out box.

A small veggie pizza ($12.99/10-inch, $15.99/13-inch) got home still warm and delicious and earned Parlour a place among my top rank of local pizzerias. The crust is thin and bread-like, with slightly puffed edges nicely tanned from the pizza oven; sweet black charred spots on the bottom signaled that it had been fired with proper heat. Tangy-sweet red sauce was applied with a gentle hand and boasted a pleasant kick of red-pepper heat. Molten mozzarella was also in proportion too, ample but not an excessive blanket. A grocer’s mix of mushroom slices, red onions, chopped fresh tomatoes, green peppers, black olives and crisp banana peppers made a delicious and abundant topping.