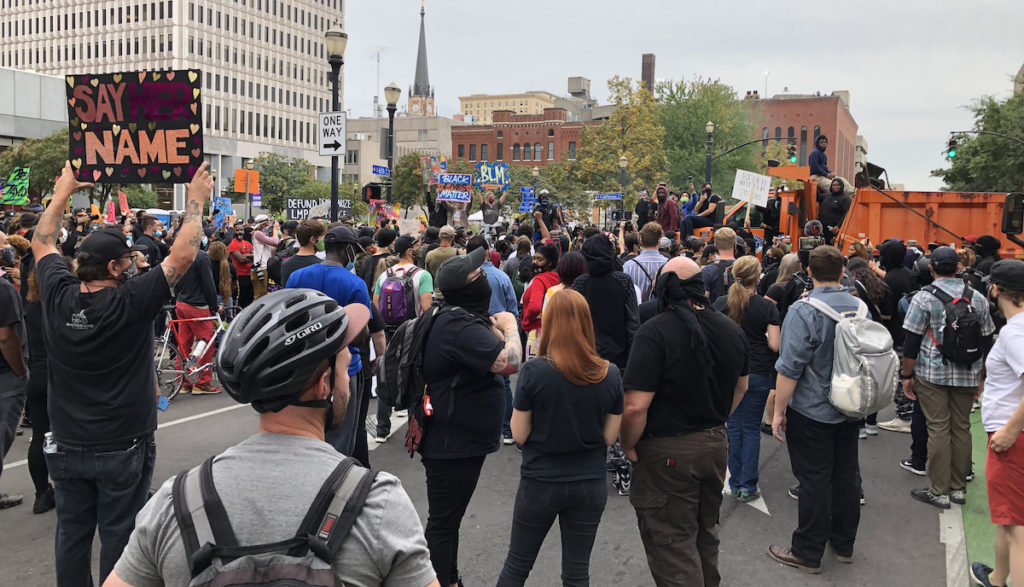 The crowd of protesters gathered in a circle on the outskirts of Jefferson Square Park. They knelt for a moment of silence for Breonna Taylor, just hours after it was announced that no police officers would be charged for her death, and only one for wanton endangerment. A little while later, a man spoke about the importance of voting, making politicians pay for their incompetence. It was just after 6 p.m. at Jefferson Square and tone was solemn yet inspirational.

The day had already seen a few clashes between police and protesters. Pepper balls were shot and arrests were made on Bardstown Road before 4 p.m., and downtown had seen similar skirmishes around an hour later. A photo circulated of a cop pulling a man on the ground by his dreads in the Highlands. A few windows were broken on buildings. Tension and tempers flared sporadically throughout the day after a historical grand jury ruling many considered to be massively disappointing and unjust, although predominately predictable, in Louisville and beyond — especially among the people who’ve spent more than 100 days on the streets, trying to get justice for a woman who was shot in her own home.

By sunrise Thursday, two police officers would be shot and more than 100 people arrested.

But, back at around 6:30 p.m. Wednesday in the Square, the day seemed to be winding down. After the speeches, some people left. Others stood around talking, chanting and holding up signs.

Then a few small fires were started. First, a trash can and a stack of boxes. Then one popped up right by the Hall of Justice. That set off the police’s Orwellian loudspeaker, telling everyone that they were a part of an “unlawful assembly” and to disperse. Officers arrived in front of the Hall, and about five people out of hundreds threw bottles at them. Pepper balls and police flashbangs followed shortly after from the police, and a few loud firecrackers were thrown by the crowd. As I was taking a picture of a trash can on fire, what appeared to be an M-80 was tossed at it, which was followed by a thunderous boom.

At this point, most protesters were on the move, as the police were staging in the Square. The crowd walked toward Broadway. A few people with baseball bats smashed bus stops and windows, but most seemed to be just looking for a way out. On Broadway, a crowd regrouped and moved south. When they turned onto College Street, what sounded like a few gunshots went off near the overpass. People ran and took cover, but when it was apparent no one was hurt, the crowd kept going. Police moved in, filtering the protesters back toward Broadway via South Brook Street.

That’s when the gun was fired that wounded the two officers. I was about a block or two behind the shots and couldn’t see what happened, but the entire crowd took off running. A couple of other journalists and I stopped and waited by a dumpster in an adjacent lot. People scattered, peppers balls were launched and terror was in everyone’s eyes because many people, like us, had no clue what just happened — only that someone pulled a trigger, and a chain reaction mushroomed from there.

It’s likely to dominate the national narrative and news that two officers were shot and fires broke out. And, of course, those things are news, they need to be reported and they’re unfortunate, worrisome and sad. But, what can’t get lost in these stories is the thousands of people who acted peacefully and are demanding change for what happened to Breonna.

The protesters collectively want to see an end to police brutality and systemic racism, but they’re not a monolith. Protests are a collection of small groups, the vast majority peaceful clusters of friends and like minds, with a small handful of people who boil over to violence. To uniquely blame “the protesters” for the actions of a few is intellectually dishonest at best, and it fails to understand the core principles of a massive civil rights movement.

No one knows where this goes from here. But people are angry. They feel betrayed by a government that they had very little faith in to begin with. A government that should have not only provided justice for Breonna, but should have prevented her death in the first place.