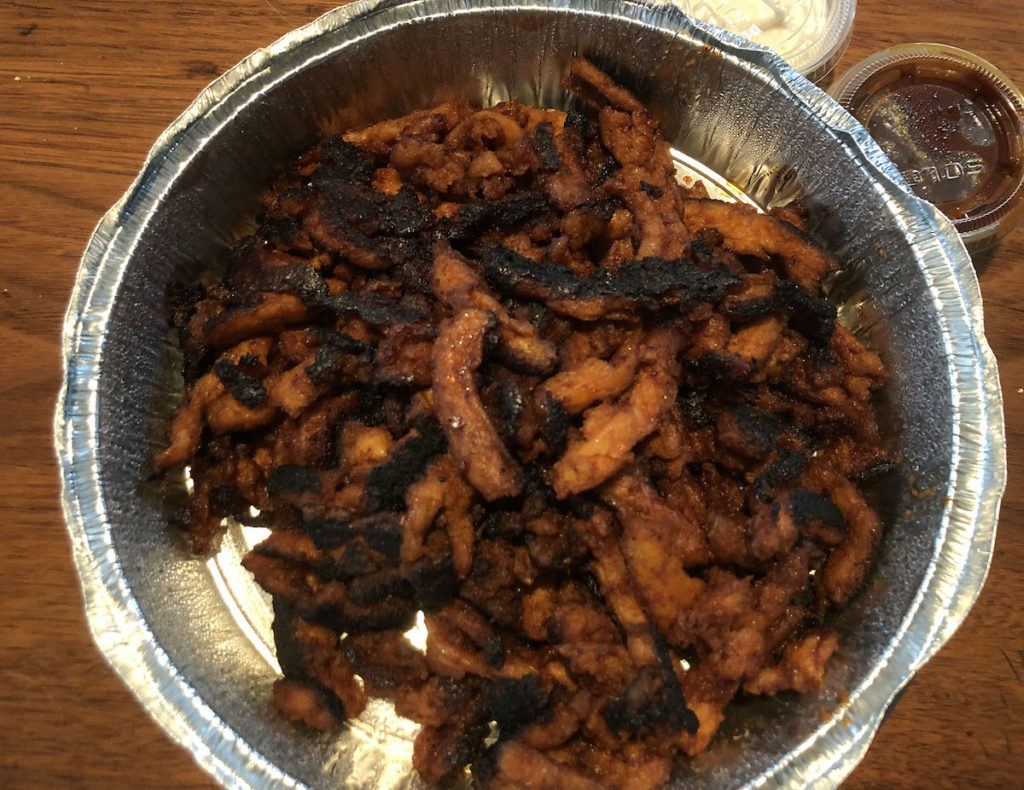 Following on his success with vegan takes on popular fast-food dishes such as the Farby, an Arby’s knockoff made without a molecule of meat, Morels Cafe’s proprietor Stanley Chase has now turned his attention to a seemingly even more impossible task.

Behold, Morels Vegan BBQ Smokehouse, where Chase is creating vegetarian, barbecued, pulled “pork” and meat-free sausages that one could easily mistake for the real thing. Chase says vegetarian barbecue is a new concept, with similar restaurants in only two other places in the U.S. that he knows of, both popular on their home ground: Homegrown Smoker in Portland, Oregon and Monk’s Vegan Smokehouse in Brooklyn.

Just over one year ago Chase closed Morels Cafe (except for occasional pop-ups) to focus on his Louisville Vegan Jerky Co. Now that the jerky endeavor has grown into a product with worldwide distribution in Whole Foods and other specialty grocers, its growing staff and production facility have allowed him to devote time to this new concept that he clearly loves.

Chase and Trevor DeCuir, manager at Morels, are serving dinners Wednesday through Saturday. It’s takeout only, through the front door of Morels’ tiny storefront on Baxter Avenue.

Orders are taken online from the Morels web page using an app that allows choices and credit card payment. Choose your pickup time and come and get it. Knock on the door, give your name and wait for one of the crew to hustle out your bag. On rainy evenings, they set up a portable shelter out front for socially distanced comfort.

As you’d expect of a barbecue menu, the selection is brief and familiar, with choice of pulled pork ($10) or a bratwurst ($6), plus four sides, a nightly special and a cookie.

We tried just about everything on the menu except the $3 double-chocolate s’mores cookie, and let me tell you, the barbecue was as good as the carnivore’s version and difficult to discern from smoked animal flesh.

How do Chase and DeCuir manage to make soybean and pea protein products taste so much like something that just came from an old-school pitmaster’s smoker? Probably it’s because they do come from an old-school, offset barbecue smoker, which bathes the vegan meat alternatives in cool, gentle smoke from applewood and charcoal chunks burning in a chamber on the side.

An order of vegan pulled pork ($10) is a full pound, enough to fill a circular foil container the size of a dinner plate up to the top. If you want barbecue buns, they are a dollar apiece, vegan and regular or gluten-free. The vegan pork is made from a pale product called soy curls, Cheetos-shaped twists produced from non-GMO, pesticide-free soy protein that serves as a protein-rich palette for whatever flavors it’s cooked with.

Morels turns these curls into alternative pulled pork by marinating, then smoking them for a full 24 hours, then moving each individual order to a searing-hot flattop grill to achieve a textured mix of sweet char on the edges and toothsome interior. Smother them in Morels’ sweet and hot house-made, Kansas City-style barbecue sauce, and they’re ready to go, with more sauce on the side. I found them a little more chewy than well-smoked pulled pig meat, but that’s a minor concern. The finished flavor was just right.

The smoked vegan brat ($6), using Beyond Sausage’s plant-based bratwurst, is an even closer match for the animal-based alternative. Beyond, like its competitor Impossible, has come startlingly close to emulating animal meat, and Morels does it right. Smoked at low temperature all day, they’re then braised in apple cider and held in a cider bath until service to keep them juicy. It was delicious, with a good, smoky flavor and a touch of hot spice, and it came with freshly grilled onions and green peppers alongside.

We sampled all four sides and were impressed with them all. Smoked baked beans ($5 for a pint, $10 for a quart) were amazing. I got a pint and could have eaten a pint all by myself. They’re made from dried beans cooked in the smoker with chopped onions, bits of vegan pork and barbecue sauce for four hours, stirring frequently as the liquid cooks down and flavor builds.

The coleslaw ($4 and $8) is creamy style, but the cream, of course, is vegan mayo. It’s a Louisiana-style slaw with strips of red bell peppers and carrots and a little spice added to the crunchy chopped cabbage.

Mac & Cheese ($5 and $10) is made from scratch, using elbow macaroni, of course, cloaked in a vegan cream made from ground, raw cashews and white cannellini beans plus a little yellow mustard.

A massive meal came to $30.74, plus a 25% tax that the ordering system calculated on the pre-tax amount.