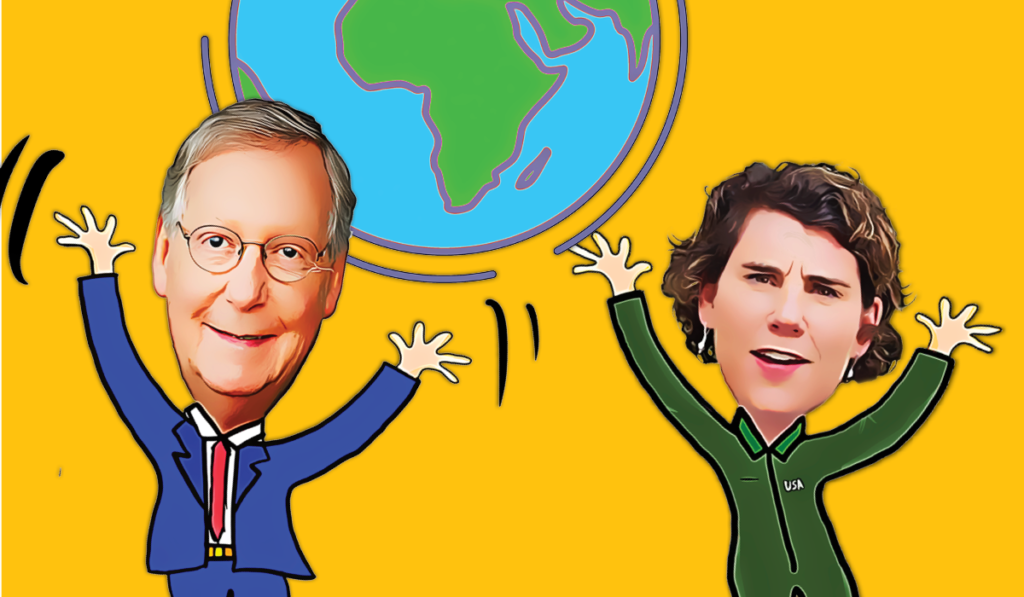 InsideClimate News is a nonprofit, nonpartisan news outlet that covers climate, energy and the environment.

As the nation decides which party will control the Senate this November, the race in Kentucky stands out for one big reason: It features Mitch McConnell.

Loathed by Democrats across the country as a cynical power broker but praised by Republicans as a shrewd political tactician, the GOP’s longest-serving Senate majority leader faces a challenge from a well-funded retired Marine lieutenant colonel and fighter pilot who flew in 89 combat missions, including bombings of al-Qaeda and the Taliban.

Climate change is not likely to be a key voting issue in the race. But the candidates have contrasting views and approaches toward global warming in a state with a historic — but drastically shrinking — dependence on mining coal, a leading contributor to climate change. Kentucky coal production in the second quarter of 2020 was down 83% from the same period a decade earlier; coal mining jobs dropped from 17,111 to 3,760.

In Kentucky, temperatures are already rising. Growing seasons are changing, and there are concerns that heavier rains are causing more flooding. Scientists have warned that it will get worse down the road, with decreasing crop yields and dangerous landslides on strip-mined mountain landscapes.

McGrath has been surprisingly frank in identifying the threats posed by global warming. McConnell, for his part, has moved a smidgen from his past statements: He now acknowledges that human-caused climate change exists.

For years, McConnell would not accept climate science, telling journalists that he did not know whether humans burning fossil fuels was contributing to global warming.

“I’m not a scientist,” he would say, adding that his priority was Kentucky coal communities, even though their economic decline accelerated under his watch, and some critics have said he should have done more to promote a transition away from coal.

Still, McConnell has sent millions of dollars to the state’s coal mining counties over the years and has promised to stay “committed to helping coal communities plan for the future with training and employment services as well as economic development,” according to a statement his office provided in response to an interview request.

He opposed the global Paris climate agreement to reduce greenhouse gas emissions — a campaign spokeswoman called it “disastrous” — while McGrath thinks the Trump administration should not have withdrawn from the accord. McConnell is also against the Green New Deal, the Congressional resolution backed by some Democrats — though not McGrath — that proposes a massive shift in federal spending to create jobs and hasten a transition to clean energy by 2050.

In March 2019, in discussing a “show vote” — engineered as a political trap for Democrats — on his own version of the Green New Deal, McConnell told reporters he believed in human-caused climate change.

“I do,” the six-term Kentucky senator said. “The question is how do you address it? The way to do this consistent with American values and American capitalism is through technology and innovation. And there is no question that is the way to get results, not to shut down your economy, throw people out of work, make people reconstruct their homes, get out of their cars … this is nonsense.”

McConnell tends to play defense on climate change. He has not put forward his own climate plan, nor have Republicans in the Senate under his leadership.

After the House of Representatives passed cap-and-trade legislation in 2009, McConnell referred to the bill as the national energy tax and said he was glad to see its demise in the Senate, which did not even put it up for a vote.

Now, McConnell is touting his support for carbon capture and storage — a technology embraced by many Republicans as a way to keep burning coal in a carbon-constrained world — and for budgets that include energy efficiency. He favors, he says, “common sense and actually attainable solutions to protect our environment.”

The League of Conservation Voters gives McConnell a 14% 2019 score and a 7% lifetime score for his votes on environmental legislation.

McConnell has defended his overall environmental record, mentioning his funding of local conservation efforts in Kentucky and his backing of this year’s bipartisan Great American Outdoor Act. The Act, signed into law by President Trump, provides $900 million in annual funding for public land protection and up to $1.9 billion a year for five years to fund a maintenance backlog at national parks, forests and wildlife refuges.

‘We Have to Plan for This’

Both McConnell and McGrath have shown an ability to raise large amounts of money, with McGrath surprisingly in the lead as of the end of June, tapping into the pool of political contributors who want to see McConnell retired.

She added, “We are already seeing weather patterns like we have never seen before. Wildfires we’ve never seen, desertification. We are going to see mass migrations.” Low-lying military bases are being flooded from sea level rise, McGrath said. “We have to plan for this. McConnell does not have a plan.”

When asked at a campaign stop in Louisville this summer what her plan for global warming would be, McGrath signaled support for Democratic Presidential Candidate Joe Biden’s climate plan, giving it a tentative endorsement. “There’s a lot of what I have seen about it that is good,” she said about the plan, adding that she understands it to be an aggressive proposal.

Biden in July announced a $2 trillion clean economy jobs program he calls Build Back Better, with jobs-creation and environmental justice as its pillars. Biden also wants Congress to pass emissions limits with “an enforcement mechanism … based on the principles that polluters must bear the full cost of the carbon pollution they are emitting.”

McGrath said putting a price on carbon appears to be an effective tool to combat climate change and has bipartisan appeal, but she said she would want to make sure it didn’t hurt “middle-class and working-class families.”

She likes the jobs and infrastructure aspects of Biden’s plan, she said, but believes that coal is still essential and that Biden should focus more on helping fossil-fuel dependent communities make an economic transition. “We have a debt to pay to our coal communities and legislation needs to account for that directly,” McGrath said.

Talking about climate change from the perspective of military experience is a new approach for a politician in Kentucky, a state that has a history of supporting candidates who are sympathetic to coal, even outside of Kentucky’s coalfields, said D. Stephen Voss, associate professor of political science at UK.

One example, he said, is how U.S. Rep. Andy Barr, R-Lexington, made former Democratic U.S. Rep. Ben Chandler pay a price in 2012 for his 2009 vote for the cap-and-trade bill. Barr’s campaign was able to paint Chandler, who served four terms representing the state’s second-largest city and the horse country surrounding it, as anti-coal.

“What Amy McGrath is doing with environmental policy fits with how she handles many of the issues that bring down Democrats in a state like Kentucky,” Voss said. “She has been willing to offer a fairly typical Democratic Party issue platform, but she is experimenting with defending it and promoting it using language and attitudes that are more comfortable and familiar with places that tend to vote more Republican.”

Whether it will work, Voss said, he’s not predicting. But he does not believe climate policy will play much of a role, if any, in the outcome of the McConnell-McGrath race. It is not an issue that moves the people in the middle of the political spectrum who are so important to the outcome, he said. A handful of polls have shown the race to be tight, according to the FiveThirtyEight website.

Environmental advocates had put their hopes behind state Rep. Charles Booker, a progressive whose “hood to holler” message had sought to connect the needs of voters in Black neighborhoods in Louisville with rural Appalachian voters and whose surging Democratic primary campaign against McGrath came up short by 3 percentage points.

Some also felt resentful that McGrath, the moderate, was given a big advantage by the support of national Democrats early on.

“We built a movement across the state in support of a Green New Deal with the most progressive candidate Kentucky has ever seen,” said Lily Gardner, a high school senior in Lexington who is active with the Sunrise Movement. “We are left with a Democratic candidate who is completely unwilling to champion the solutions to the climate crisis that both science and perhaps more importantly, justice demand.”

She said the youth climate movement will work to get out the vote this fall and support progressive candidates for local elections, but “in no way will we be publicly endorsing McGrath or supporting her unless she makes a radical left turn.”

Despite McGrath’s clear recognition of the problems of climate change — in stark contrast to McConnell — “no one is fired up or excited,” about her, said Wallace McMullen, a longtime clean energy and environmental advocate from Louisville, who is a Sierra Club leader in the state.

McGrath has not been endorsed by the Sierra Club in Kentucky, but then she has also kept her distance from the group, said McMullen and Tom Morris, who chairs the Kentucky chapter’s political committee.

“The sad fact is that sometimes statewide candidates don’t want our endorsement in Kentucky,” Morris said. “We have not been able to get a response from her.”

As an alternative, the state chapter has issued a non-endorsement, of sorts, against McConnell. “It basically says vote for anybody but Mitch,” Morris said.

Morris, of Bowling Green, said he plans to vote for McGrath. He said he’s pleased she recognizes that climate change is a problem and he was equally pleased to hear she has said good things about Biden’s climate plans.

“McConnell’s record speaks for itself,” he added. “He has blocked any kind of meaningful climate legislation. He supports Donald Trump and enabled Donald Trump and that in itself has been sufficient reason to oppose him.”

McConnell is not popular in Kentucky, but Kentucky voters have shown repeatedly they prefer his clout to whatever competition he might have. He has been favored in a state that hasn’t voted for a Democratic president since the election of Bill Clinton, 24 years ago and that gave Trump a 30-point victory in 2016.

One or two election cycles ago, a candidate with McGrath’s understanding of the climate crisis would have been enough to elate the state’s environmental community. That some are now saying “meh” is an indication of the growing sense of urgency among climate voters and represents a threat to her campaign.

Money is an equalizing influence in politics and McGrath has been able to raise a lot of it. As more Republicans nationally endorse Biden amid questions about Trump’s handling of the coronavirus pandemic and his character, there is a chance this could turn into a wave election against the president. If that happens, all bets are off.

One thing, though, is for sure, if McGrath does win, it would be an upset of historical proportions. 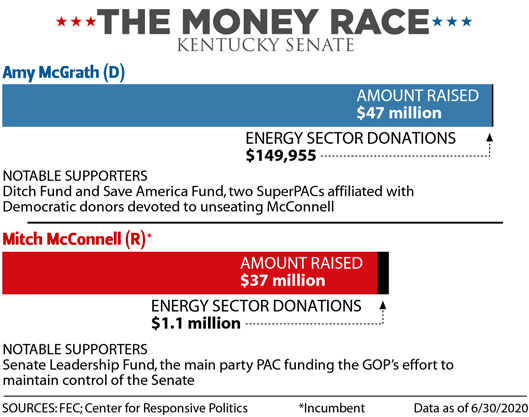 •  Senate Majority Leader Mitch McConnell, who led the congressional resistance to what he’s called “President Obama’s war on coal,” has been in lock step with the Trump administration’s agenda to promote fossil fuels and relax environmental regulations.
•  Amy McGrath, a retired Marine fighter pilot and McConnell’s challenger in November, views climate change through the lens of her military background, seeing it much as the Pentagon does, as a national and international security threat. She likes the Biden climate plan, the most aggressive put forward by any Democratic or Republican Party presidential nominee in history, but says she still has questions about it.
•  McGrath has raised tens of millions of dollars, giving her an opportunity to compete against McConnell, who has also raised tens of millions of dollars.