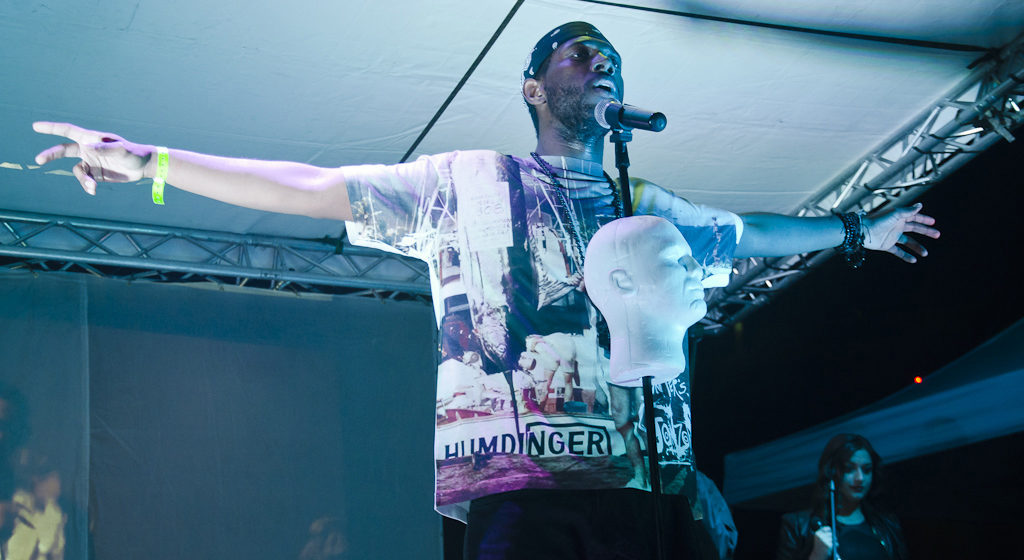 In LEO last week, Scott Recker wrote about local music that has come out this year in response to the socio-political upheaval in Louisville and across the nation. As that article mentioned, the Louisville DIY music scene has a long and storied history of standing against oppression of all varieties, including music ranging from punk to country to hip-hop and beyond. Here is a chronological list of songs culled from the last two-and-a-half decades, each confronting injustice head on.

Following the breakup of the seminal hardcore outfit Endpoint, singer Rob Pennington and Duncan Barlow wanted to return to their punk roots and a more direct message. By the Grace of God was the answer to this prompt, with a finger-pointing, 1-2-3-GO!-style sound designed to fire up an audience. “November’s Lie” is an anti-capitalist anthem, particularly scathing to the use of corporate money in politics, and how elections and media are bought and sold. Search YouTube.

With another warning against the dangers of unfettered capitalism, early-aughts hardcore combo Three Nails For A False Prophet combined imminently moshable moments with a politically intense message. On “Capitalist Consequence,” singer Mike “Bigtime” Lewis skewers “the haves” continued and ceaseless exploitation of “the have-nots.” In this fictional narrative though, the consequence for this profiteering is violence and property destruction as a comeuppance. Search Bandcamp.

The lead to the excellent Goddamage, Year of the Pig is as much about apathy as it is about political avarice. Singer/guitarist Ryan Patterson snarls about misinformation to create the “American illusion,” all for the sake of undermining any real revolution, a particularly salient and unfortunately prescient commentary on political theater. Patterson turns that rage inward, screaming, “I need to find a safe place because I’m feeling lost in this world,” a feeling that resonates still today. Search Bandcamp.

A skewering of political incompetence and cruelty set in an apparently post-apocalyptic landscape, “Antebellum” features the Shipping News at their most powerful. The lead from their final album, One Less Heartless to Fear, singer/guitarist Jason Noble pictures George W. as a figure of rank horror and cowardice, a figure that hides in a bunker with the justification that “great men make sacrifices.” Backed by a plodding rhythm section, “Antebellum” is a tonal shift in the band’s style, not only instrumentally, but in the unflinching confrontation in the lyrics. Search Bandcamp.

Released post-financial market bailout, “Held For Ransom Olds” by Chime Hours is a powerful response to fiscal irresponsibility. Prefacing rhetorical attacks on millennials to save and avoid spending on things such as avocado toast or coffee, singer Duncan Cherry points the finger first at the rich receiving bottomless handouts at the expense of the poor. When he sings, “more than the shirt off your back, but the skin right off your bones,” he’s doing so as a direct response to the influence of Wall Street on your street. Search Bandcamp.

Brutality is part and parcel to the music of Anwar Sadat that paints a poignant, if visceral picture of the very real specter of fascism. On the 2014 release, singer Shane Simms rails against blind capitulation and tribalistic servility in the political spectrum, ruminating on complacency as a disease. Simms argues that binary politics are flip sides of the same coin, used to command, well, obedience. Search Bandcamp.

From the brilliant Concerto No. 9, Movement II, “So Amerikkkan” is a fiery attack on nationalism disguised as patriotism. Rapper Rmllw2llz examines the history of America as one built on the backs of Black and brown people, exploited and discarded by white, privileged society. His politics here are nonpartisan, skewering Donald Trump and Hillary Clinton equally as representatives of two parties that have continued to fail his community for centuries. Search Spotify.

In 2016, Louisville country luminary Tyler Lance Walker Gill came out swinging with “So Called Christian Politicians,” a throwback Western jam in the classic genre tradition of taking shots at authority. This is a working class anthem that deftly balances personal faith with scripture by examining the story of Jesus as a literal social justice warrior, an advocate for everyone, not just the people who look and believe like you. Gill punctuates his chorus with, “Oh god I hope you’re up there, so you can send them all to hell,” a leering sendup of faith as political theater. Search Bandcamp.

New York ex-pat, rapper Pronoun’s “Law of Averages” scrutinizes racial inequities through the lens of systemic racism. With each verse, Pronoun addresses the various injustices that he and his community face every day, from the use of “patriotism” to other political protests, to the vicious reality of slavery. Released in 2018, one situation he covers about a police officer invading an apartment and shooting the occupant dead is tragically reminiscent of the death of Breonna Taylor. On the chorus, he raps “everywhere we go we’re randomly treated savagely,” a world-weary plea to just get through. Search Bandcamp.

With Decades, 1200 balances systemic racism with personal responsibility. Here, the narrative is about a dealer who gets pinched, a target of racist policies. Regret informs the song’s protagonist, as he’s missed out on his life due to prison, while causing harm in his community. This is juxtaposed against both the character’s need to trap due to the dearth of opportunities in his life and a racist and classist war on drugs that disproportionately imprisons black people every year. Search Bandcamp.