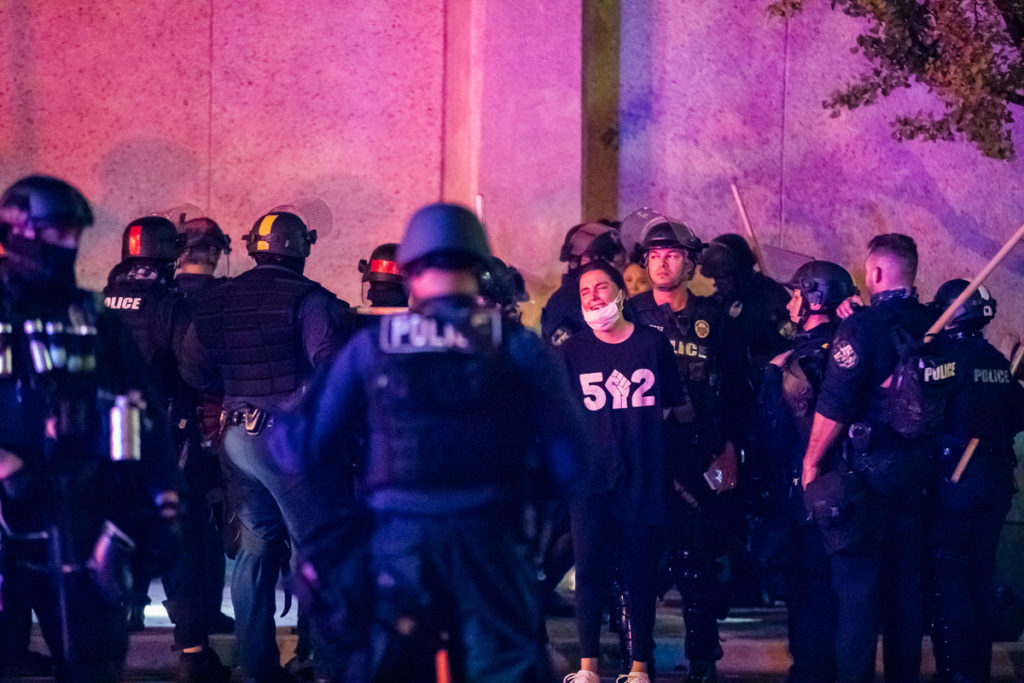 LMPD arrested protesters out past curfew on friday night. | Photos by Kathryn Harrington.

It was just after midnight on June 1 when Louisville police and the National Guard stormed a parking lot on 26th Street and Broadway. They were more than 20 blocks from the downtown protests, but officials later said they were there to enforce the 9 p.m. curfew. David McAtee, owner of YaYa’s BBQ, was cooking food for friends and family who frequently gathered there Sunday evenings. The police shot pepper balls at the group. McAtee fired a gun outside of his kitchen and then was killed by a rifle round fired by a National Guard member.

Now, months later, police claim they were outside of McAtee’s because they received intelligence of a protest caravan forming in the area, but the existence of a curfew that night gave law enforcement license to break up the otherwise peaceful group. Even though that night showed the dangerous side of enforcing a curfew, the city ordered another last week after a grand jury ruled that no police officer would be charged for the death of Breonna Taylor, and only one received counts of wanton endangerment. During the ensuing nights of curfew, from Wednesday to Monday, there were more than 200 arrests. Two police officers were shot. Police and protesters clashed after dark. Peppers balls flew. Flash bangs exploded. Police surrounded a church that was giving sanctuary to protesters after curfew.

Councilperson-elect Jecorey Arthur, who will serve District 4, which covers downtown, said that the curfew emboldens police and causes confusion.

“What it does, is it kind of creates this cover for law enforcement to do what they please and for us to have less visibility in terms of what actually went down and what actually happened,” he said. “I believe that’s why the David McAtee killing is kind of being swept under the rug, because there’s just so many question marks about what happened that night: Why they went to The West End, who authorized them to come to The West End, what took place. But, the curfew, like I said, is very much like a veil for unruly behavior from the people who are supposed to be protecting and serving us.”

Some cities have stopped using curfews during recent protests. Portland, Oregon hasn’t implemented one since earlier this summer after finding it to be ineffective. At a press conference Sunday, Democratic state Rep. Lisa Willner called on Mayor Greg Fischer to lift the curfew. And Rhonda Mathies spoke about getting arrested and how the curfew is being unequally applied to unfairly target the protesters.

“They got us caged up,” Mathies said. “But, you can go last night, they was partying in the other end, the east end of town. This curfew’s supposed to be countywide, but we are taking the blood of this curfew.”

When Fischer lifted the curfew Monday, he said it had worked as intended.

“The curfew served its purpose of helping ensure that most people were home safe by 9 p.m., because our past experience had shown that most violence and destruction occurs after dark,” the mayor said in a statement. “We sadly saw some violence, including the shooting of two police officers, one of whom remains hospitalized, dealing with complications of his injuries. But we believe the curfew helped, by ensuring fewer people were out late in the day.”

Arthur said the curfew was another misstep by local leaders.

“Our city government has made a long list of bad decisions,” Arthur said.

After someone broke a window of the main branch of the library and threw a flare inside on Thursday night, several protesters found sanctuary from the police at First Unitarian Church of Louisville. People en route to the church were arrested, among them state Rep. Attica Scott on a charge of felony rioting, which she has denied and which provoked disbelief from many in the community as well as calls for changes in the law. Police then surrounded First Unitarian, besieging the protesters inside for several hours until a deal was made to let them leave. The ACLU of Kentucky sent a letter to Jefferson County Attorney Mike O’Connell asking him to drop the charges against the 24 people arrested, calling the situation unconstitutional.

The church’s minister, Rev. Lori Kyle, said the curfew is being used to silence people.

“We view the curfew as stifling,” Kyle said. “These are important opportunities for people to have a voice, especially during this time of response to the attorney general’s announcement, generally about the lack of charges against the people who murdered Breonna Taylor. It’s important people have the opportunity to gather.”

A day after Scott’s arrest, the church held a gathering with live music and food. Kyle said that it was an effort to ease the tension, which she said the curfew intensifies.

“It invites and lays the foundation for another level of chaos and potential conflict,” she said. “Protesters are going to be active, and that’s part of what we knew when we offered sanctuary — it’s going to happen. Let’s help them to be safe in it. The curfew adds a layer of chaos.”

Many people claim the curfew was not equally enforced. That, in downtown and The West End, the police were zoned in and active, but The East End was largely not being patrolled. At that press conference on Sunday, Tyra Walker, co-chair of the Kentucky Alliance Against Racist and Political Repression spoke about the inconsistency.

“It’s supposed to be county-wide as our mayor and everybody else has said. But evidently, it’s not. It’s only protest wide. … So only the protesters are being locked up. Because, I also have a second job. I don’t want to say where I work, but I also have a second job. We close at 8 o’clock so that our employees can get home by nine. As I was leaving, the restaurants where I work that’s not protest-wide were still open. With cars still in the drive thru.”

“We do not have enough officers to be everywhere all the time to enforce curfew,” he said. “There are some other criteria that we have learned along the way in enforcing curfew. For instance, if somebody is on private property, like a closed business, and they have a lawful reason to be there, that is not something we can enforce. If they are in a church, that’s not something we can enforce as long as they’re on the church property. So, those are things we’ve learned along the way. But, we generally, when we do anything, try to enforce it in the fairest manner possible to everybody, but we simply don’t have resources to be everywhere all the time.”

History, near and far

Until these recent protests, the last time Louisville had a curfew for adults was in 1974 after tornadoes killed 10 people and badly damaged several neighborhoods. In 1968, a curfew was enacted after a series of riots. Elsewhere in response to the protests regarding the deaths of Taylor and George Floyd, several cities have issued short-term curfews.

Some cities found them ineffective. In Portland, Mayor Ted Wheeler announced July 2 he would not extend the city’s curfew because it had been largely unsuccessful. Commissioner Jo Ann Hardesty told Oregon Public Broadcast that the curfew was “having the opposite impact we’re wanting to have.”

Olivia Katbi Smith, who is the co-chair of the Portland chapter of Democratic Socialists of America, has been consistently active in those protests. She said that, when the curfew was in place, it accelerated the police reaction.

“The police used that curfew as an excuse to arrest and brutalize pretty much everyone,” she said. “They tear gassed everyone. There was a case where they tear gassed a pregnant woman. This sparked a lot of lawsuits. It basically just gave the police sole permission to attack and arrest everyone they came across after 8 p.m., and it did not do anything to help the situation. It only inflamed it and made it worse.”

Alex Vitale, a professor of sociology and the coordinator of the Policing and Social Justice Project at Brooklyn College, said that curfews are not an ideal move by governments, telling this to Vox in a story that was published on May 31:

“Curfews are an extremely blunt tool that should only be used sparingly and as a last result,” he said. “They give police tremendous power to intervene in the lives of all citizens. They pose a huge burden on people who work irregular hours, especially people of color in service professions who may need to travel through areas of social disturbance in order to get to and from work at night.”

Arthur, who often talks about how society has to address its problematic past in order to move forward, said that the curfew is rooted in racism, and furthers extremism.

After a weekend that remained relatively calm, the curfew has been dropped. Whether it comes back depends on what happens next and how the city government reacts to it. During the two curfews this year, volatile and highly-publicized situations have emerged.

During those tense events, Arthur said, it becomes imperative to find ways to ensure everyone gets home safely. Last Thursday, when the protesters were at the church after curfew, surrounded by police, he texted the mayor this to urge him to work out a solution: “I was calling to see if you could tell LMPD to let people go home. We all want the same thing in that regard.”

Arthur told LEO: “What I meant by that was, as much as police talk about, they just want to get home safe to their families, I was reminding him and drawing a parallel and saying the protesters in the streets, we all just want to safely get home, but very much so at night.”

Ten minutes later, the mayor responded, saying that the LMPD had cleared the protesters to leave. As it turned out, during Schroeder’s testimony before the council, he said city officials had discussed entering First Unitarian Church but decided against it.

Arthur said he was among several people who had encouraged the mayor to let protesters go home, so he didn’t want to overstate his role in helping. But, he added, “I’m glad to do my part, and to be just a small fraction of freedom for anyone who is trapped in a situation that they do not want to be in and they should not be in.”