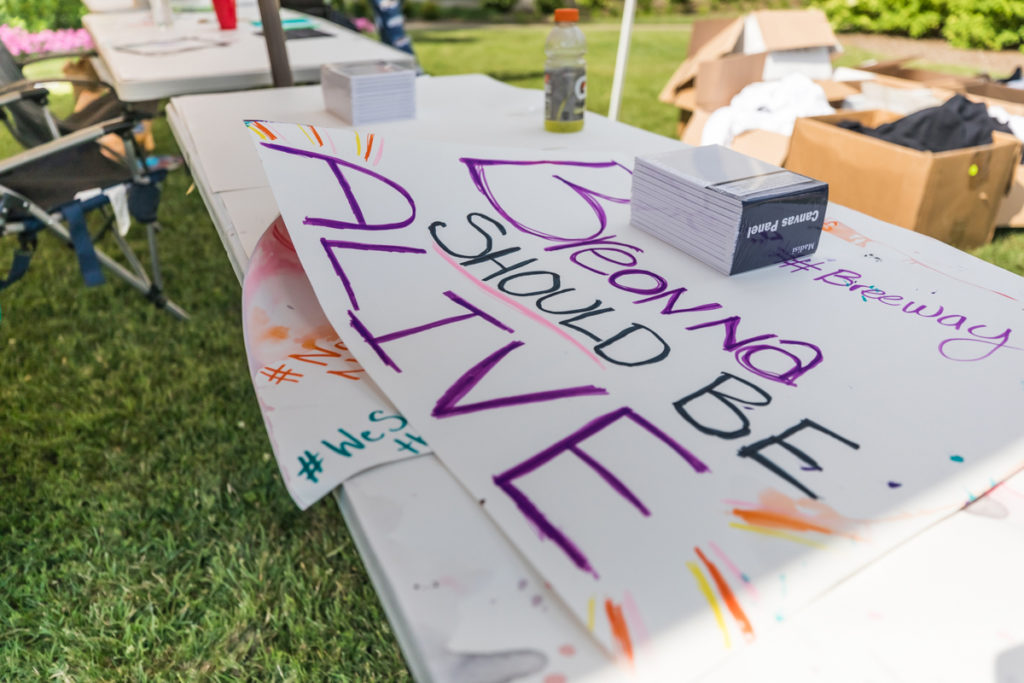 A sign supporting #JusticeForBreonna during a protest event in July. | Photo by Kathryn Harrington.

What many people don’t realize is that the Breonna Taylor case is straight out of the police playbook. It’s so common that colleagues and I call these cases, “The Girlfriend.” Here’s how it works: the police conduct a drug trafficking investigation. They identify a suspect, get some surveillance video, collect some wiretaps that may or may not be relevant and possibly intercept a package of drugs. But to make a trafficking case stick, the prosecution needs a witness: a real live person to take the stand and point at the defendant and declare — “He’s a drug dealer.”

So, they arrest their suspect’s girlfriend — or ex-girlfriend — usually on little evidence. She frequently has no criminal record. That doesn’t matter. The police threaten her with felony charges — complicity to trafficking or something else. If she has children, they imply that her kids will be taken away, and she’ll have a heck of a time getting them back. The police then say that this nightmare will disappear if she simply testifies against her boyfriend. Sometimes they squeeze the boyfriend instead, telling him they’ll charge her if he doesn’t plead guilty.

It’s a powerful love that can withstand that pressure. Sometimes the girlfriend won’t do it. She refuses to agree with the accusations, and then we’ve got a fight on our hands. More often, she realizes she doesn’t have the resources to fight back. She agrees to plead guilty herself to a lesser charge and testify against her boyfriend. The prosecution now has a powerful witness, leaving the boyfriend little choice but to also plead guilty.

Everyone gets convicted of something and the machine grinds on. This happens every day in Louisville. Every day.

That’s what the police were probably doing in the Taylor case: storming into her apartment late at night to scare her so that she would agree to testify against Jamarcus Glover. But everything went wrong. The warrant never should have been issued. The surveillance failed to reveal that a third party, Kenneth Walker, was with Taylor. When the police broke in unannounced, Walker stood his ground and tried to defend himself and Taylor.

Louisville police officers killed Taylor that night. Her death brought all of this to light and focused the nation’s attention on our city. But, rather than admit their errors and try to make it right, the police department doubled down and tried to smear Taylor.

The police and prosecutors tried to flip the script and get Glover to smear Taylor in exchange for a plea bargain. In mid-July, they offered Glover a deal that could have led to probation instead of prison. All he had to do was say that his ex-girlfriend was involved in drug trafficking. Glover declined the offer.

And let’s talk turkey: Underlying all of these cases is the open demoralization of these women. The police position is clear — if you’ve had a sexual relationship with a drug trafficker, then you are unworthy of respect. You are “other,” you are “less than,” and they can use you as a pawn in their war on drugs without compunction. That’s how poor, mostly Black women get treated by our criminal justice system.

Meanwhile, our city is being torn apart. Between the pandemic and our city leaders’ absolute refusal to address the systemic racism of our criminal justice system, Louisville will never be the same as it was before this case came to light.

That’s a hard truth for a lot of us to accept. The exposure of decades of unequal policing and unequal prosecuting is going to leave a wound. For those of us who’ve seen this truth for years, I think it has come not a moment too soon. And I say to those of us who are just now waking up to this truth: It’s been a long time coming.