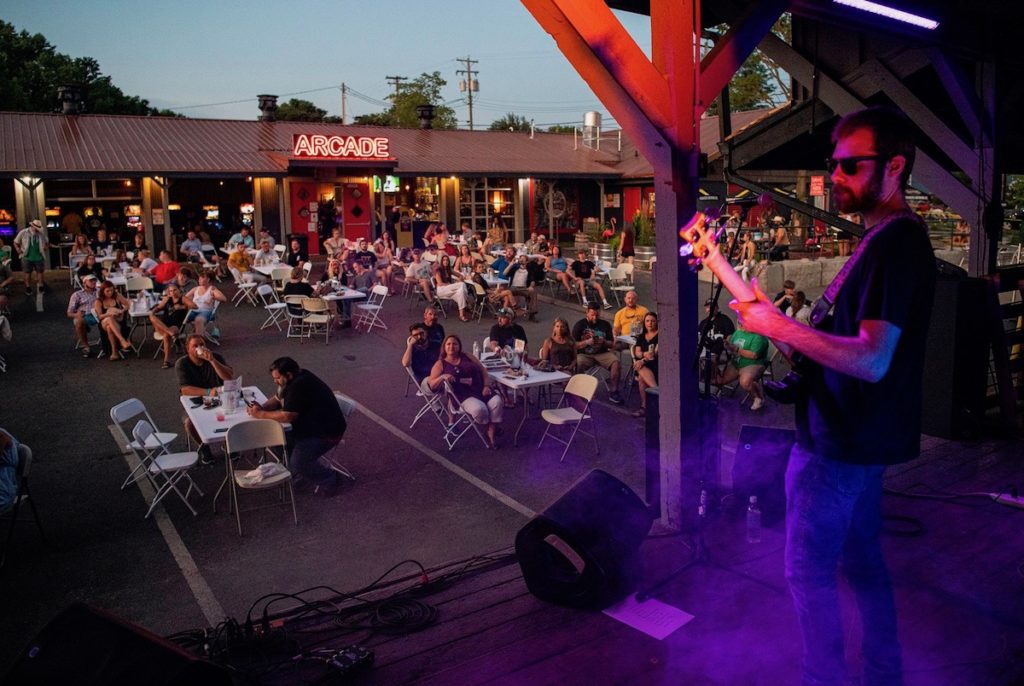 A socially-distanced outdoor show at The Burl in Lexington.

Headliners Music Hall is considering holding a few outdoor concerts in the fall, but first it has to solve many planning challenges, including legal obstacles and safety measures.

“We’re going to do this the right way, period,” co-owner Billy Hardison said.

Headliners, like many other independent venues across the country, has effectively been shut down since COVID-19 swept through the country in March. With capacity and distancing regulations, as well as few bands touring now, plus the added danger of being inside with crowds, indoor shows have become impractical, but more and more venues have been holding shows in their parking lots or other outdoor spaces — or are looking at doing so.

It’s not nearly as easy to do as it might seem. Headliners, for example, has several problems to solve. First, the parking lot next to the venue’s building where an outdoor concert could potentially be held is owned by Distillery Commons, which usually leases it to Headliners for parking, so they would need to work out an agreement before a show could be held. Hardison said they are discussing a plan.

Next, because the parking lot has a different address, Headliners’ liquor license isn’t valid there, but selling its own alcohol would be pivotal to making money during a socially-distanced outdoor show. But there may be a path forward. Because of the pandemic, bars and restaurants in the state are allowed to submit a plan to the Kentucky Department of Alcoholic Beverage Control to expand their liquor license to a neighboring yard or parking lot.

Even if those problems are solved, there are so many more aspects to making an outdoor concert happen, such as finding local acts to sell enough tickets, noise issues, numerous safety precautions, building a crowd space with socially-distanced high-top tables, price points for tickets and drinks and, the most challenging — essentially building an entirely new concert venue outside.

Hardison believes that figuring it out now might be beneficial for the future.

“We might be able to pull that off, but most importantly not just for the three-day weekend that we would do in October, but now we could show ourselves that we could do it, that we could do it well, or not, learn from our mistakes, and be prepared to do that in the spring,” he said.

Scotty Haulter, who is the director of ops and production manager of Production Simple, the company that throws concerts at Headliners, Old Forester’s Paristown Hall, Iroquois Amphitheater and other venues, said that building an outdoor stage during the pandemic is doable, but it will take a lot of advanced planning and careful decision making.

“You have to rethink all of it,” Haulter said. “Things aren’t going to be the way they used to be, because if they were we would all be open and we’d have sold out shows going. It definitely is reimagining and doing things in a different way to achieve the same goal.”

Haulter, who has more than 30 years of experience in the industry, said that the best thing that can be done is to have a unified game plan. That means having early discussions about concerns, regulations, expectations and healthy practices with the crew, the venue’s employees and the artists, and also relaying as much information as possible to the fans before they get to the venue.

Haulter has also been working with a coalition of venue representatives from around town to establish a standard of how to safely throw concerts. On top of rules from the federal Centers for Disease Control and Prevention and state, some guidelines they’ve established include temperature checks for artists and their crews, a buffer zone of at least 12 feet of distance between the stage and the crowd, wiping down and sanitizing all equipment and merch before loading in and social distancing during the striking of equipment. But Haulter said that every small action has to be examined, and jobs such as building a stage, loading in and getting artists onstage will take longer than usual because of the careful and calculated new methods.

“With the pandemic, once you come up with one solution, you sort of create six other possibilities,” Haulter said. “If I know that I’m going to unload a truck all at one time, you have to start thinking about that when you’re putting a production on in a pandemic. What is the safest practice at that point? Do I want eight people standing around there in close proximity to each other? The obvious answer is, no, I do not. So then you have to start working backwards at that point.”

A few regional venues are holding outdoor concerts now, including Hi-Fi in Indianapolis, The Mellwood Tavern in Louisville and The Burl in Lexington, the latter of which has seven parking lot shows planned for September. Mark Evans, whose company Land Line Presents books shows at The Burl, said that, so far, the outdoor concerts have run seamlessly.

“They’ve been going great,” Evans said. “It’s been getting a positive response. Everyone’s felt really safe and had a really good time. So, that’s really all we can ask for. Everyone’s behaved themselves really well, social distancing and adhering to the rules that we put in place.”

The Burl had an easier time than Headliners has because it owns its parking lot and has a large porch that runs the length of the venue, which was easy to convert into a stage. They sell about 50, six-person tables per show, which act as pods that keep people within their own group.

Land Line Presents also books shows at Zanzabar, which Evans hopes can soon hold outdoor shows. The space to do it is available, as the building next door to Zanzabar was demolished to build Bar Of Soap, a planned laundrocade, but that construction was delayed because of the virus, so right now it’s currently an empty lot. But they’ve run into some challenges.

“We’re running into a lot of red tape with the city — zoning issues and neighborhood issues,” Evans said. “It’s made it really hard to figure out how to do it, which is unfortunate.”