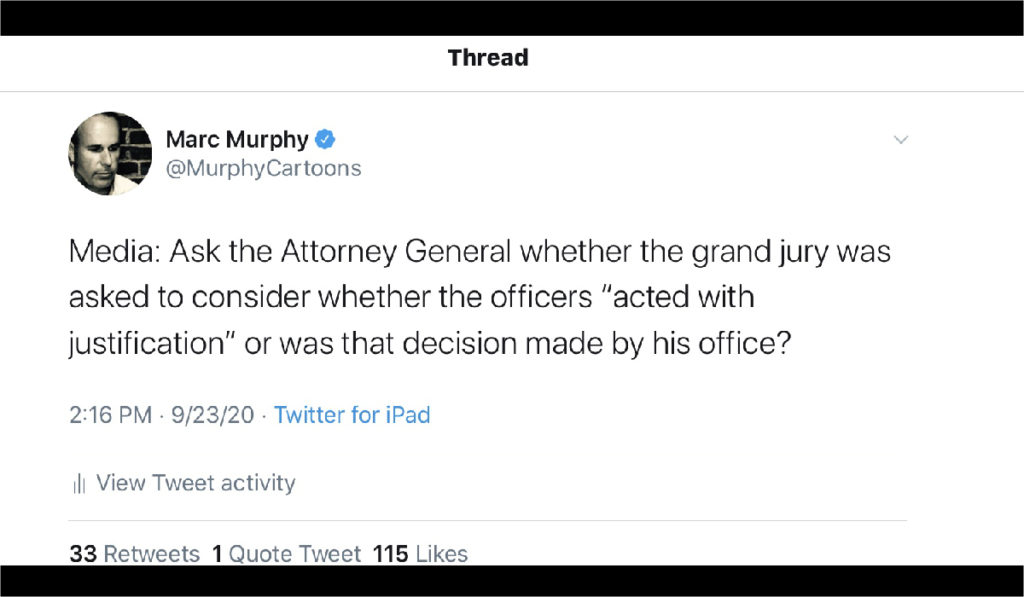 [Ed. note: This was written before Attorney General Daniel Cameron released a statement saying prosecutors presented all of the evidence in the Breonna Taylor case to the Grand Jury and that officers Jonathan Mattingly and Myles Cosgrove were justified in their use of force. Therefore, only the wanton endangerment charge was recommended, which applied to former Detective Brett Hankison. In response to a grand juror’s demand for the release of the Grand Jury recordings, Cameron said he would file them with the court.]

To paraphrase a quip that’s been oft-repeated in recent days, while it’s true a prosecutor can get a Grand Jury to indict a ham sandwich, it’s equally true that he can keep that ham sandwich from being indicted. At the risk of taking the pork imagery one step too far, Kentucky’s attorney general single-handedly saved officers Jonathan Mattingly’s and Myles Cosgrove’s bacon. This, he should not have done.

Worse, the only reasonable conclusion from his press conference and the Grand Jury’s report to supervising Judge Annie O’Connell is that he misled us about how he did it. He owes it to Breonna Taylor, to Kenneth Walker, to Louisville, and to the world, to tell us what really happened. Until he does, fires — metaphoric and real — will continue to smolder and burn. This becomes more true daily as legitimate challenges to the evidence he did describe are brought to light.

In the moments after his press conference, lawyers and others who listened closely to his carefully chosen words began to suspect the worst: That charges against officers Mattingly and Cosgrove were never actually presented to the Grand Jury for their consideration. That the “justification“ for their actions described by the attorney general was determined by him, and not the Grand Jury of the officers’ theoretical peers. In other words, not by us.

A prosecutor is allowed to do that, in the ordinary case. In theory and practice the prosecutor can be the first line of defense, ironically, protecting citizens from unjust or political prosecution. The American Bar Association Standards of Justice and the U.S. Supreme Court emphasize that while prosecutors have clients for whom they must zealously advocate — the people — unlike defense counsel they have a separate and equally important obligation to pursue the truth. Sometimes the truth is obvious and works to prevent a case from going further. That is not, however, the case here.

Being a prosecutor isn’t easy. I’ve been one in three different jurisdictions. It shouldn’t be easy. But he made his job unnecessarily harder by deciding that he, alone, should determine whether a rain of bullets from inside and outside that home by “trained” police was a “justified” response to the home-dweller’s single shot (evidence strongly suggests he believed they were violent intruders in the middle of the night, not police). Worse, by fudging the announcement with the obvious hope that the average observer would conclude the Grand Jury, not he, made that decision, he violated the memory of Breonna Taylor and added fuel to the fires of doubt our community already has in the justice system itself.

I do not know, nor does anyone outside his office to my knowledge, with 100% certainty that the case was not presented to the Grand Jury. It almost certainly wasn’t. The Attorney General won’t answer this question, posed daily since last Wednesday’s press conference. Further, as many have noted, there were no No True Bills returned, strongly suggesting that draft indictments (“bills”) were never considered by the Grand Jury, whose obligation would have been to return No True Bills if they believed crimes had not been committed.

Grand Jury secrecy is most definitely A Thing. However, it’s not the Thing the Attorney General wants the world to think it is. The rules prevent participants who were in the room from disclosing without a court order what they heard and saw. The witnesses themselves can stride right out of the Grand Jury session, hold a press conference, and tell the world what they just said. Similarly,  prosecutors are fond of holding press conferences, standing behind mountains of seized drugs or in front of large charts on easels and describing in detail the evidence that either will be or has been used to obtain indictments. Prosecutors can and should also describe why charges were not filed.

Because it is clear now that the Grand Jury never had the opportunity to consider the cases against the men who shot at and killed Breonna Taylor, the Attorney General owes us — “owes” is a strong word but it is exactly the right one here — (1) an admission that he made that decision for us, and (2) the transcripts of the proceedings themselves. Per the rules, he’s either already or will soon have to provide them to Officer Hankison’s counsel.

If he doesn’t, the message to Breonna’s family and the suffering and besieged community in Louisville, the nation and the world who has been Saying Her Name for months is that except as it was relevant to bullets shot through her apartment into the white neighbors’ place next door, the Grand Jury never heard her name at all.

Marc Murphy is a trial lawyer in Louisville and an editorial cartoonist for The Courier Journal.