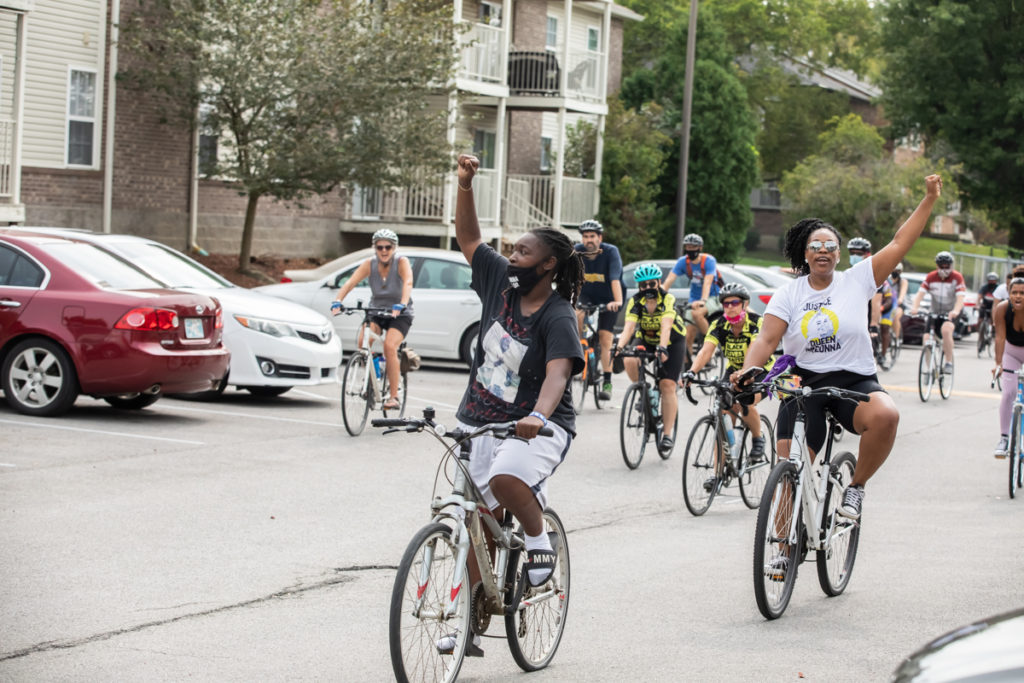 Participants in the bike ride held up their fists and chanted briefly as they entered the apartment complex where Breonna Taylor was killed by LMPD in March.

Dozens of cyclists took to the streets Sunday to demand justice for Breonna Taylor during the Say Her Name Bike Ride.

The ride began at Jefferson Square Park, where Shameka Sells-Moore spoke to the crowd about her daughter Shanaira Selden. Selden went missing last year in October and her body was found a week later in the Ohio River. At the time of her disappearance, police had said no foul play was suspected, The Courier Journal reported. Sells-Moore said police initially suspected her death was a suicide, but she wants them to investigate further.

“They made it up to make the pieces fit. So again I challenged it,” she told the crowd, explaining that “The cause of death has been changed to undetermined. … But there’s still been no investigation.”

“Shanaira is just a small part of everything that is going wrong with our system. They don’t care about our brown girls, they don’t. They didn’t care about my brown girl, I did,” Sells-Moore said. “It is something that I have to deal with every morning when I wake up, every hour of the day I think about my daughter, and it’s really hard to grieve when you can’t even get justice. I appreciate rides like this, I appreciate everyone that brings everything to surface. I appreciate the ones that understand that this is just not right.”

One of the organizers of the ride, Nicole Williams, hopes to bring the demand for justice to other areas of Louisville. “This was a different way for us to get out and protest and take this to neighborhoods that are a little further away,” Williams said.

The cyclists left Jefferson Square Park as other riders joined for the rest of the ride to Breonna Taylor’s apartment. Cyclists were then invited to ride to the waterfront for refreshments as well as visits with therapists if they needed one.

At Breonna’s apartment on Springfield Drive, flowers, candles and signs adorn the patio. Several cyclists added items to the memorial.

Said Williams: “I want people to know what happened and where it happened … Seeing the Square and physically being there is an amazing feeling. I’m so happy that Louisville created a space where Breonna Taylor’s mother can go and just sit in peace and be fed and be nurtured and listen to music. The Square is amazing — that’s why every ride starts at the square. But you have to see this too. This is tragic, this is heartbreaking, but this is real, and this is why we’re here because this keeps happening.”

“Hopefully today people can come to this place where it happened and lay their eyes on the truth. See these bullet holes for yourself,” she said.