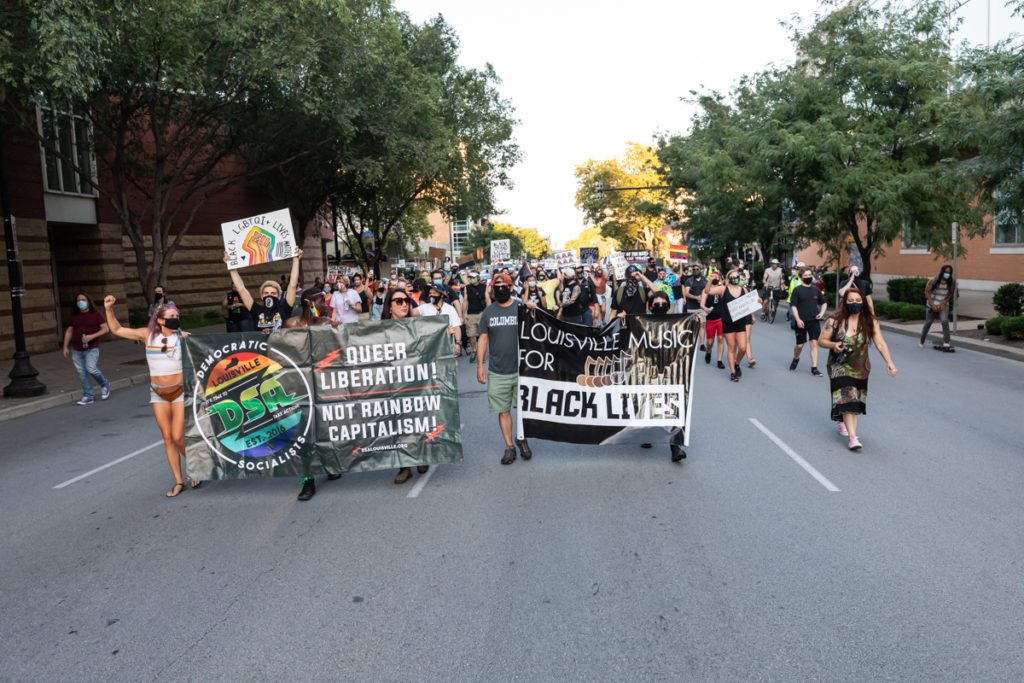 The LGBTQ March for Black lives and Out of the Bars, Into the Streets march joined forces on Jefferson Street. | Photo By kathryn harrington.

Among the uncomfortable? Mayor Greg Fischer, who put that into words as he explained newly enforced rules to keep protesters off the streets: “We’ve got to have some orderliness to the city so regular citizens can go about their day-to-day activity.”

Yes, he said that: Regular citizens. For more than 70 days and nights, people have used their creativity, voices and bodies to demand justice for Breonna Taylor and an end to police brutality.

Musicians are marching weekly. So are moms, members of the LGBTQ community and the army of chefs, servers and others who make our restaurants so great. There is even a “Smallidarity” Kids March.

People have come here from New York and Atlanta and Ferguson, Missouri and around the world to take part in the push for justice, as Louisville sadly has joined the tragic pantheon of cities where police have killed Black people.

The protesters are creative, once taking over NuLu with a pointed message aimed at gentrification there and the lack of Black representation in businesses. Earlier, they brought their demands to the lawns and curbs of Attorney General Daniel Cameron’s and Fischer’s homes.

But on Sunday, Louisville police said they would begin enforcing what they claimed were laws to keep pedestrians out of the streets, to forbid vehicles and protesters from blocking intersections. They also want to restrict caravan protests: “Participants who refuse to comply with any law or lawful order will be eligible for citation and/or arrest.”

The police coated their language with affirmations of First Amendment protection and pledges that they were considering the safety of protesters.

But Fischer told the truth: The new focus on how protesters can protest is for what he sees as the rest of the city.

“We’re just concerned about where all this can lead,” Fischer said, according to The Courier Journal. “And whether it’s protesters trapping a car on a road, and then somebody inside of the car gets frightened, and there’s no telling what their response will be, or going through Fourth Street Live and raising havoc in there while people are dining — we can’t have that.

“We’ve got to have some orderliness to the city so regular citizens can go about their day-to-day activity. And you can still protest while you’re doing that, but you can do so peacefully.”

Protesters see this new push as yet another effort to squelch their freedom of speech and right to assemble. And a local lawyer said he will seek an injunction to block the new rules of the road and protest.

Hours after the police announced its new policy, protesters took to the streets again. Two people were arrested and six citations were handed out.

But, this past weekend was huge for the movement, with rallies every day, some merging with others in Jefferson Square Park, variously renamed as Injustice Square or Breonna Taylor Park. There was an anti-eviction demonstration downtown Saturday, during which furniture was left in a downtown intersection to block traffic. The musicians’ rally also was Saturday, drawing hundreds from the city’s music scene.

On Saturday, Black Lives Matter Louisville hosted a “healing ceremony” in Shawnee Park and restated its demands on the city. Those demands have not wavered.

They include that Mayor Greg Fischer resign and for the city to:

­­— address the use of force by LMPD
— fire and rescind pensions for Brett Hankinson, Myles Cosgrove and Johnathan Mattingly, the officers who broke down the door of Breonna Taylor’s apartment, leading to her shooting death.
— create a policy for transparent investigation and demand Cameron be fully transparent in investigation
— develop local, independent civilian community police accountability council

BLM Louisville issued a statement ahead of the rally. It read, in part:

“We’ve heard it many times before and will hear it many times again, Louisville is tired, we’re going to be tired today, tomorrow and so on until we get the justice and respect we deserve. We deserve respect and justice just as simply for being a human and living being. We deserve to sleep in peace, to walk home from the store. We deserve the security that if someone came into our homes in the middle of the night without any announcement and killed us, that they would be held accountable. The sad reality is that we do not have the peace of mind that Susan, John or Beck have. We are not protected in Louisville and that is just a fact. Facts based on recent events and the response that our “leadership” has given, or lack thereof.”

“I say this to all the protesters who feel as if they’re not making a difference, to all the beautiful artists who feel as if you’re pouring out your heart into this art that LMPD will throw away, keep applying pressure. Y’all we are making them squirm and very uncomfortable. We’ve found out that stopping their commerce magically opens their ears and I say let’s bust them wide open. This is your community do not let these white cis males come in and try and make you feel less than or not enough. Each and every one of you all are sacred and vital to our community. Remember that.”

We don’t think the new police rules will help. We think they will cause more “good trouble.” •