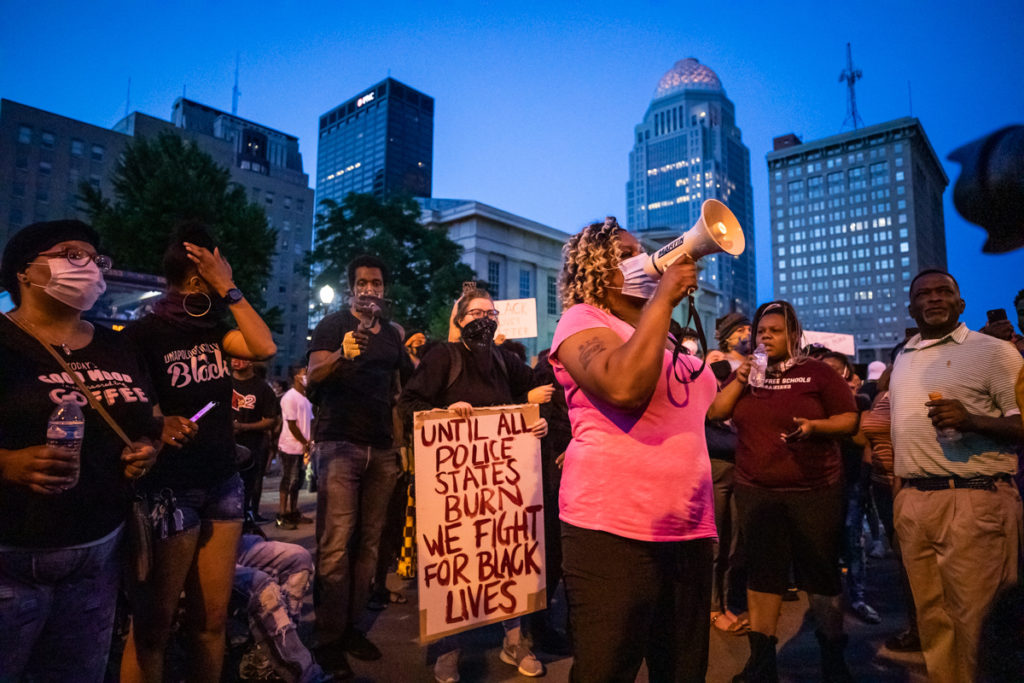 Protesters have been marching downtown for more than 70 days. | Photo by Kathryn Harrington.

I have always worked downtown and lived in the suburbs. I’ve always loved downtown. About four years ago I decided to move to The Henry Clay building downtown. I wanted to be where the action is — in the middle of business, commerce and entertainment. I wanted to wake up in the morning and go to bed at night in the middle of it all. Waking up to the sound of traffic and activity was my caffeine. I walked to work, restaurants, ball games and theaters.

I have loved it here.

But in late May, all the reasons I moved here went away.

It’s as quiet as a tomb.

No rush hour, no buzz, barely a restaurant or coffee shop available.

I did what our city leaders wanted us to do — I committed to downtown.

During the last 10 weeks, I’ve seen the worst of humankind but also the best of humankind. On May 29, the building in which I live was looted, and fires were set outside my living room window. Scary and despicable. But I’ve had the privilege of walking to Jefferson Square and being around the protesters and their activities and have seen some spectacular, beautiful people pushing for a very important and just cause.

So, my heart breaks for downtown’s current emptiness. Yet, I also feel blessed for living downtown and seeing personally and up close the protests and other activities for the cause of racial justice.

I moved here to be in the middle of the action. That action of downtown, tragically, is now on life support. But I’ve been enriched to be so close to the protesters, to meet them, to talk with them. And, frequently, I have been intellectually and spiritually challenged to look inwardly at my own prejudices while also, at times, struggling to understand the situations of others.

People often ask me if I regret living here or if I might move away. While it’s very painful and sad to see my neighborhood looted, vandalized and become less safe — I would not trade this experience.

I pity many in the suburbs who only read about it or watch it on TV and then shake their heads and say: “I’ll never go downtown.”

Those words sadden me. Now is not the time to turn our backs on downtown. It needs us like never before.

As the old saying goes — you can’t be a suburb of nothing.

Dan Hartlage is a principal with Guthrie/Mayes Public Relations.