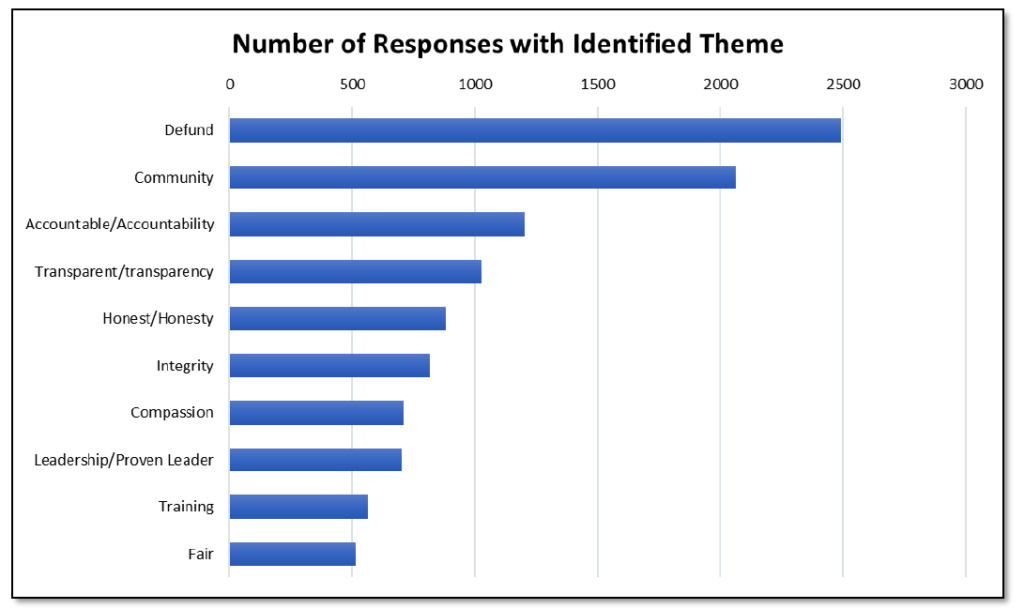 The city surveyed and spoke with more than 10,000 people to create a profile of what Louisville community members and police employees want in a new police chief.

It was done, ostensibly, to help Louisville hire a chief to replace Chief Steve Conrad, who was fired in the midst of protests over the death of Breonna Taylor, shot by police during a drug raid that turned up no drugs.

Of the 10 most common themes that 10,102 community members brought up in an online survey, “defunding” the police was at the top. It received close to 2,500 mentions, followed by just over 2,000 references to “community.” The most popular themes from there, in order, were “accountability,” “transparency,” “honesty,” “integrity,” “compassion,” “leadership/proven leader,” “training” and “fair.” In addition to surveying community members, more than 185 Louisville police employees were polled by the Police Executive Research Forum of Washington, D.C. via the online survey and listening sessions. Most of the same themes emerged, except, notably, defunding the department.

The results from the survey and listening sessions, released in early-August, were flawed.

They included common themes and frequently used phrases from Louisville Metro Police Department employees. But, LMPD answers were not quantified and ranked like the community’s online survey answers were.

And, community members could take the online survey multiple times. PERF did not measure how many times this happened, so results may have been skewed.

Around 120 Louisville leaders, including Metro Council members, business people, religious leaders and members of the international community and activist groups were also consulted in listening sessions held by PERF.

Police officers agreed with community members on some of the most common themes identified in the online survey with some minor differences.

Community members and elected officials said they wanted a police chief to bridge the gap “between the community and the police department, developing trust and improving dialogue.” Police employees wanted the same, minus the mention of the “dialogue,” but plus “trust” and “legitimacy” within the department, too. Community members and elected leaders wanted implicit bias, de-escalation and cultural competency training for police. LMPD employees wanted “systemic racism and better implicit bias training” and more training for new recruits.

There were some significant differences.

Community members also brought up some issues that officers didn’t, such as de-militarizing the police and requiring social workers and mental health workers to respond to “critical incidents.”

Community members wanted to renegotiate it to reflect “community concerns.” Police employees complained about it not being renegotiated, too, but didn’t say what they wanted from a new contract.

After the survey was released, Mayor Greg Fischer said in a statement that PERF’s results “reflect the reality that we’re a city of almost 800,000 people and there’s a diversity of perspectives on policing and leadership.”

His takeaways were that the chief should be a good communicator, able to strengthen the trust between police and the public, accountable and transparent and able to connect with and inspire police employees to rally them around public safety reform. The chief should also recognize that their job is to serve and protect, Fischer said.

“Ultimately, we all want the same thing — a safer, more racially just and more equitable city, and a city that shows the rest of America how to move from tragedy to transformation,” Fischer said.

Ricky L. Jones, chair of the Pan-African Studies Department at UofL and a member of the city’s Citizens Commission on Police Accountability, did not take part in the survey, but, based on his experience, he thinks the community and police employees diverge on what they want in a police chief.

“They’re living in very, very different worlds,” he said about community members and police officers. “They have different views of one another.”

Robert White was the last police chief whom Jones believed the public had faith in, but many officers didn’t like him, Jones said. A 2012 Courier Journal article by Jessie Halladay (now an LMPD spokesperson) said that White was criticized for being secluded and not spending enough time with officers.

“That tells you the balance, right, that needs to be struck,” said Jones. Jones said he wants a police chief who treats Louisville’s various communities the same. And, he’d prefer a chief who is a thinker — someone with “scholarly sensibilities.”

“You know, I would ask a police chief some different questions than what’s the most effective body mass to hit if you got to shoot somebody or when you should use a gun versus when you should use a Taser,” Jones said. “I would want a police chief who is an intellectual at this point. Who really has a deep and profound sense of American history and how race has played out in American history. Because, let’s face it, this is at the heart of the problems that we’re having: race.”

But, ultimately, Jones said that surveys such as PERF’s are rarely used by the governments that distribute them.

“I think that those types of tools, and I’m not saying this is what they’re doing right now, but those types of tools are usually used to create an illusion of democracy, you know,” said Jones. “I mean, the community members at large obviously are not people who have decision-making power on who the person who’s going to be chosen will be. But, this gives folks who actually have the power of choice the ability to say we went through the process of polling the community and having a democratic process.”